In Serbia, “1 of 5 Million” anti-government protests continued, as well as protests organized by the opposition party Alliance for Serbia (SzS). SzS blocked all entries to the state television station in order to draw attention to deteriorating media freedoms under the current government of the Serbian People’s Party (SNS) (RFE/RL, 13 December 2019).

In Russia, demonstration event numbers soared to the highest this year. This development was mainly driven by Communist Party of the Russian Federation (KPRF) organized protests in support of two high ranking KPRF functionaries ‘harassed’ by the government: Pavel Grudinin and Sergei Levchenko. Organized by local KPRF branches across the country, protest events were numerous but also small in scale (Kommersant, 14 December 2019; RFE/RL, 14 December 2019). Notably, protests picked up after Levchenko announced his intentions to voluntarily resign on 12 December, a decision thought to be a result of government pressure (RFE/RL, 13 December 2019). In response, the Irkutsk KPRF branch called for the government’s resignation.

In a separate development, protests against the government’s waste management plans in Arkhangelsk region swelled, with a single protest reportedly attracting over ten thousand participants (Novaya Gazeta, 8 December 2019). New government plans, released later that week, suggest that the authorities are responding to the pressure by relocating waste to other regions (RBC, 16 December 2019). If carried through, demonstrations in Arkhangelsk region may draw down, but at the same time, demonstrations in the other affected regions may increase.

In Ukraine, demonstrations were held demanding that the President defends national interests regarding non-government-controlled territories in Donbass and Crimea regions. The protests were organized by opposition parties in response to the Normandy summit between Ukrainian, Russian, French and German leaders (Deutsche Welle, 8 December 2019). At the Normandy summit, Ukraine and Russia agreed on a new exchange of prisoners, disengagement of forces in three more locations, and a full and indefinite ceasefire by the end of 2019 (RFE/RL, 10 December 2019). The most contentious issues remain unresolved: local elections and special status for the Donbass region (Atlantic Council, 12 December 2019). The agreed ceasefire is not expected to hold for any significant time; previous ceasefire agreements each resulted in a temporary lull, with fighting back to pre-ceasefire levels within several weeks.

In the Donbass region, fighting between Ukrainian government forces and separatist rebels continued at similar levels to weeks prior, with 130 armed clashes and 110 shelling incidents resulting in five reported fatalities. 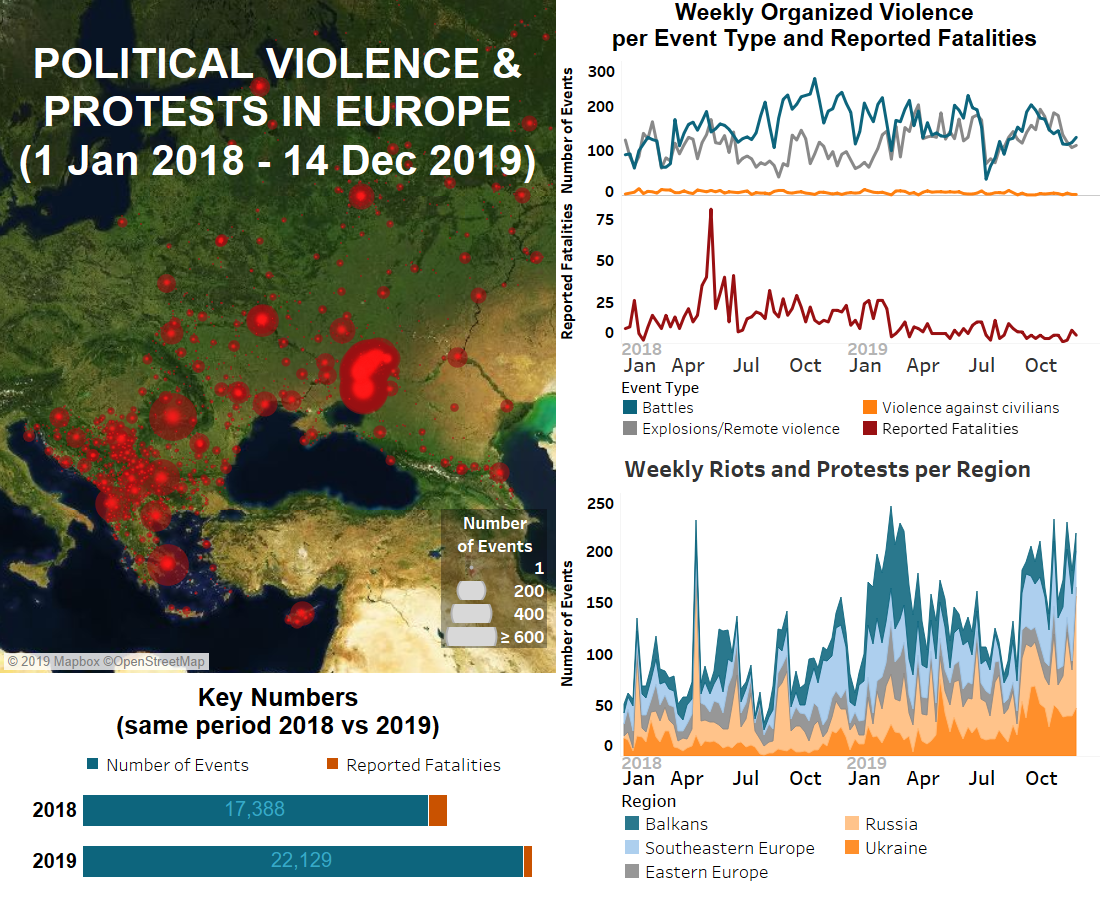