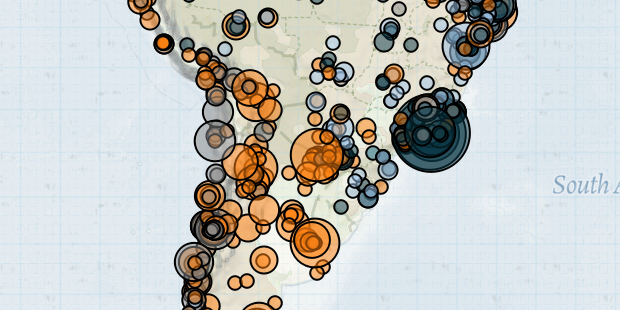 Last week in South America, key developments include: increased unrest in Chile; political killings in Colombia, and a clash between state forces and the Gulf Clan; civil unrest in Guyana following a contested election process; and continued risk to civilians in Brazil caught in the crossfire of fighting between armed groups.

In Chile, the number of demonstration events increased significantly last week in comparison to the week prior. Following the end of the summer vacation, student organizations renewed their activities in the capital and other major cities. In the Santiago Metropolitan region, protests led by students led to the interruption of the metro system for three consecutive days (Biobio Chile, 6 March 2020). Over the week, at least two people were killed and several others were injured during clashes between demonstrators and police forces (La Tercera, 7 March 2020). On 26 April, Chileans are expected to vote on a national plebiscite on whether to rewrite the constitution and how. Opponents of the Pinochet-era constitution claim that the chart fails to guarantee healthcare, education, and pension rights (The Guardian, 15 November 2019).

In Colombia, in the department of Antioquia, three suspected members of the Gulf Clan were killed during an armed clash with military forces (El Tiempo, 4 March 2020). The Gulf Clan, formerly called Autodefensas Gaitanistas de Colombia, originated as a right-wing paramilitary group, and currently fights against the National Liberation Army (ELN) for control of drug trafficking territories and markets in the country (InSight Crime, 14 March 2018). Since November 2019, the armed forces initiated several operations, with limited success, to curb the territorial advances of the Gulf Clan and the ELN in northwest Colombia (Semana, 1 February 2020).

After general elections in Guyana, the People’s National Congress Party and the People’s Progressive Party/Civic (PPP/C) both declared victory, even though the verification of results in Region Four were not yet finished (BBC, 5 March 2020). The opposition party, PPP/C, accused the governing party of fraud, and thus organized demonstrations all over the country demanding verification and recounting of the results. While most of the demonstrations were peaceful, clashes took place in Georgetown, where police opened fire against protesters, wounding seven. In Cotton Tree village, a demonstrator was shot dead during a clash with the police (Kaieteur News, 5 March 2020). Given the top court accepted jurisdiction over an injunction, the election process is still ongoing and further demonstrations are likely to continue.

In Brazil, the strike of military police officers in the state of Ceará came to an end after 13 days, following negotiations with the government. Authorities denied the officers’ demands for amnesty to reduce their penalties, as strikes led by the Army forces are prohibited by law and are therefore considered mutiny. This could lead to further unrest as the officers’ demands were not fully addressed (El País, 1 March 2020).

Additionally, civilians continue to be at high risk of being caught in the crossfire between armed groups in Brazil. In the city of São Gonçalo, in Rio de Janeiro state, a 4-year-old was hit and injured by a stray bullet during a shoot-out. The identity of the shooter is still unclear; police declared they were not conducting operations in the area (G1, 6 March 2020). In the West Zone of Rio de Janeiro city, a wheelchair user was shot and killed by a stray bullet in the head during a military police operation in the area (G1, 6 March 2020).

In Uruguay, Luis Lacalle Pou of the National Party (PN) took over the presidency, after 15 years of leadership under the leftist government of the Broad Front (FA) (Xinhua, 2 March 2020). Lacalle Pou was elected with over 50% of votes in November 2019, with the promises of a realignment with the United States and reform to the education system (Americas Quarterly, 23 February 2020).

Bhavani Castro is the South America Research Manager at ACLED. She holds a M.A. in International Security from the Institut d´Études Politiques de Paris – Sciences Po Paris, and a B.A. in International Relations from University of São Paulo. Her research interests include ethno-nationalist conflicts, communal violence, and non-state armed groups and gender. She is fluent in Portuguese, English, and French and is based in São Paulo, Brazil.
12 March 2020
Share
TweetShare on Twitter Share on FacebookShare on Facebook Share on LinkedInShare on LinkedIn