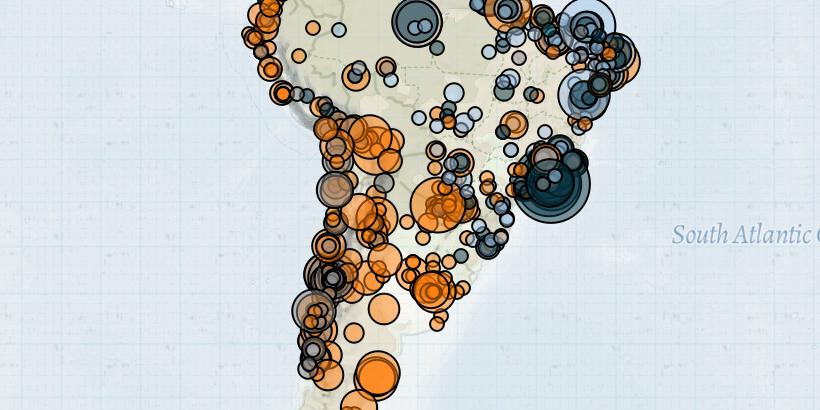 Last week in South America, key developments include: increased unrest in Chile; clashes involving the National Liberation Army (ELN) and political killings in Colombia; clashes between armed groups on the Colombian-Venezuelan border; opposition-led protests in Venezuela; continued risk to civilians caught in the crosshairs of fighting between armed groups in Brazil; and continued civil unrest in Guyana following a contested election process.

In Chile, the number of demonstration events continued to increase significantly compared to the previous week. Feminist groups held marches on 8 and 9 of March, in celebration of International Women’s Day, and to demand protections of women’s rights and the end of gender-based violence in the country (TeleSur TV, 9 March 2020). On 11 March, hundreds of Chileans took to the streets again on the occasion of the second-year anniversary of President Sebastián Piñera’s government. Mostly led by students, the demonstrations aimed to show dissatisfaction with the lack of answers to the different social demands made during the over four months of social unrest beginning in October 2019 (La Nación, 11 March 2020).

In Colombia, in the department of Bolívar, one ELN member was killed during an armed clash with military forces (RCN Radio, 12 March 2020). Another clash took place involving the ELN, in Cauca department, where the group engaged in a battle against dissidents from the Revolutionary Armed Forces of Colombia (FARC), with no fatalities reported. Around 700 residents were displaced due to this clash (Blu Radio, 8 March 2020). Between January and October 2019, more than 15,000 people, mostly members of the Afro-Colombian and indigenous communities, were forcibly displaced in the country due to clashes between armed groups (InSight Crime, 23 October 2019). The ELN continues to paralyze daily life in the region and severely affects livelihoods in Colombia, making it one of the most powerful and disruptive armed groups in South America (InSight Crime, 6 March 2020).

Attacks on former FARC and social leaders also continued last week in Colombia. In Sucre, one former FARC member was killed, while one social leader and one unionist leader were both killed in Cauca department. In 2019, Cauca was the department with the highest number of reported events targeting civilians in Colombia (ACLED, 2020).The continued killing of community leaders and former FARC members highlights the government’s inability to guarantee the protection of human rights defenders and former combatants. The peace agreement of 2016 provided for the creation of mechanisms to protect those previously involved in the conflict.

Widespread demonstrations were held in Venezuela on 10 March 2020, as the opposition leader, Juan Guaidó, called for a free and fair presidential election in the country. The majority of protests were peaceful and were not met with intervention; in Caracas, however, National Bolivarian Police (PNB) officers used tear gas, pellets, and bullets to stop demonstrations, though no fatalities were reported. Although more than 50 countries around the world recognized Guaidó as President of Venezuela in 2019 (Global Americans, 10 December 2019), the opposition still struggles to regain momentum (ACLED, 2020).

Widespread protests took place in all regions of Brazil in celebration of International Women’s Day. Femicide, domestic violence and other forms of gender-based violence were main issues at the forefront of the demonstrations. Other demands were also highlighted, such as addressing violence in rural areas and justice for the murder of Socialism and Freedom Party (PSOL) councilwoman Marielle Franco and her driver. The councilwoman was killed on 14 March 2018 in Rio de Janeiro city, and the ongoing investigation points to a police militia as responsible for the attack (G1, 14 March 2020).

In Guyana, unrest in the aftermath of elections continued. While the most violent riots had died down over the weekend, last week supporters of the Partnership for National Unity + Alliance For Change (APNU+AFC) gathered outside of the Guyana Elections Commission’s office, heckling and booing officials who attempted to pass through. Journalists who tried to enter the premises were prevented by the crowd (Kaieteur News, 15 March 2020).