Central Asia and the CaucasusRegional Overviews 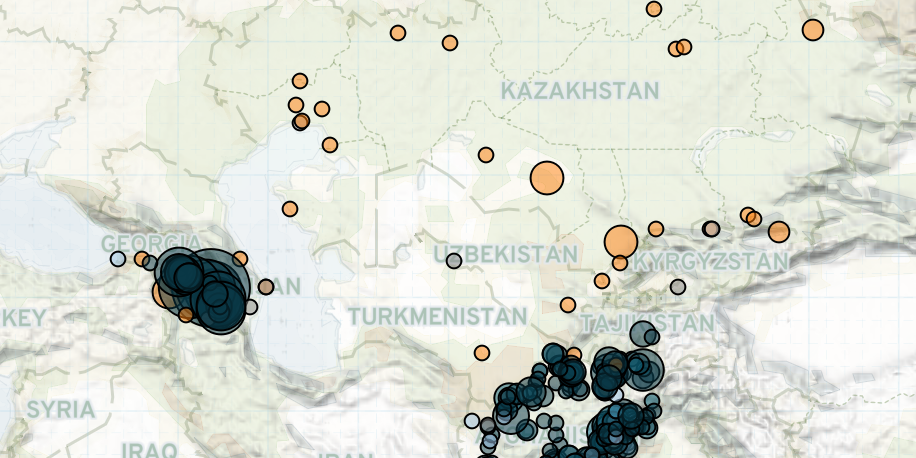 Last week in Central Asia, concerns over Afghanistan’s coronavirus outbreak prompted an unplanned release of Taliban prisoners, despite ongoing fighting between the Taliban and the Afghan government. In Kazakhstan, healthcare workers continued to protest against the government’s handling of the coronavirus crisis, and laborers demonstrated to call for back pay from employers challenged by the reeling economy. In the Caucasus, Easter celebrations held by the Orthodox Church amid the pandemic provoked criticism in Georgia, while ceasefire violations continued along the Azerbaijan-Armenia-Artsakh lines of contact.

In Afghanistan, fighting continued between Afghan forces and the Taliban at a slightly lower level compared to the week prior. While Afghan forces conducted airstrikes in northern Jowjzan and central Urozgan provinces, the Taliban continued to launch frequent attacks targeting the government, especially in Logar province, where nine soldiers were killed in a Taliban assault (Anadolu Agency, 16 April 2020). The attack followed President Ashraf Ghani’s call on the Taliban to commit to a complete ceasefire in light of the coronavirus crisis. The Taliban denied the request, stating that the group was not fighting in areas with confirmed cases. The group also asked the government to release more Taliban prisoners to facilitate an effective peace process (Arab News, 16 April 2020). Alarmed by the breakdown in peace talks, the US envoy to Afghanistan earlier this week asked the government to accelerate the prisoner exchange and to complete it before the Taliban’s springtime offensive (Reuters, 21 April 2020). This led to the additional release of 71 Taliban prisoners (TKG, 22 April 2020). US officials are reportedly concerned that Afghanistan’s under-developed healthcare infrastructure will be unable to address the coronavirus crisis, particularly amid continued fighting. Although the number of confirmed cases remains just above 1,000, dozens of administrative workers in the presidential palace tested positive last week, indicating that the spread of the virus may be underestimated due to the country’s limited testing capacity (New York Times, 19 April 2020). The government increased security measures this week and imposed a lockdown in Kandahar city and banned commutes on public streets in Kabul (Khaama Press, 9 April 2020). For more on the impact of the coronavirus on violence involving the Taliban, see this recent spotlight piece from ACLED’s COVID-19 Disorder Tracker (CDT).

In a separate development, on 17 April, six people working in the key US military base at Bagram were killed on their way home. Although the government claimed that the attackers were Taliban-affiliated, the group rejected the accusation and stated that it stopped attacking US forces as part of the recent peace deal. On 9 April, the base also came under a rocket attack by Islamic State (IS) militants (TOLO News, 10 April 2020). While IS has been largely subdued in Afghanistan, some observers warn that the group may mount a resurgence (Washington Post, 9 February 2020).

In Kazakhstan, ambulance workers continued to protest in Nur-Sultan and Aktau cities, demanding equal wage increases for all paramedics. Additionally, in Almaty, the country’s largest city, almost 200 patients and medical personnel tested positive for coronavirus in the Central Clinical Hospital last week (RFE/RL, 17 April 2020). As the Ministry of Health and regional governments exchanged accusations over the crisis, the head of the hospital was forced to resign, leading doctors to protest on 14 April and call for his reinstatement (Informburo.kz, 14 April 2020). Economic problems caused by the crisis also triggered protests in eastern Semey city and northern Kushmurun town, with workers accusing employers of withholding their salaries. While small enterprises are struggling due to the economic downturn, workers are unable to claim government aid despite the lack of income because they officially remain on payroll (Eurasianet, 17 April 2020). Especially in Kushmurun, where aid is distributed according to wage records, some families can hardly meet basic needs (Ng.kz, 10 April 2020).

In Georgia, the Orthodox Church drew criticism when it moved forward with Easter gatherings despite the risk of coronavirus and the ongoing state of emergency, which was extended just before the holiday with a ban on all private vehicle traffic throughout the country (RFE/RL, 16 April 2020). The cancellation of mass religious gatherings and some Orthodox traditions in Georgia first became an issue at the start of the pandemic (RFE/RL, 17 March 2020). However, the Easter celebrations provoked the strongest criticism of the Orthodox Church due to the clear risks, despite taking place under strict police supervision (Eurasianet, 16 April 2020; 20 April 2020). One of the country’s opposition groups, ‘Shame Movement,’ held an online protest criticizing the government for exempting the patriarchate from complying with the emergency measures.