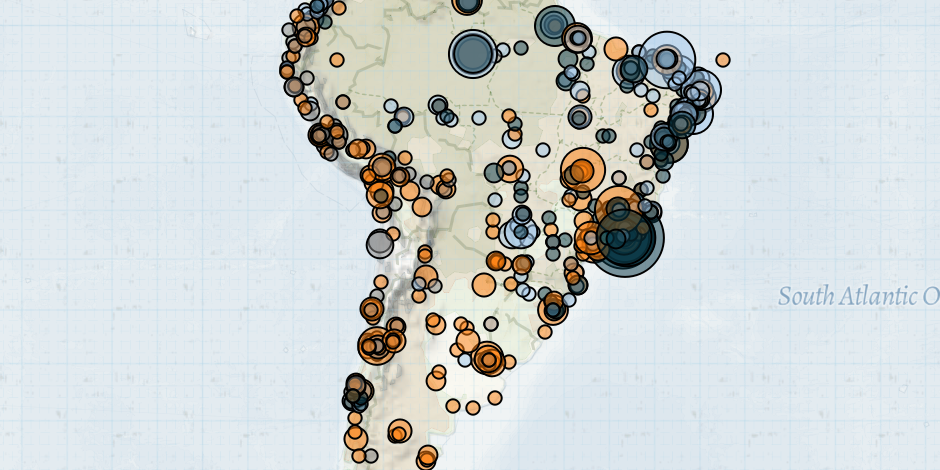 Last week in South America, key developments include: demonstrations in Colombia and Venezuela over government aid; political killings in Colombia; prison riots in Peru and Venezuela; increased demonstrations in Chile; protests against quarantine measures in Brazil, as well as continued armed clashes between criminal groups and state forces; and protests led by health workers around the region.

In Colombia and Venezuela, demonstrations slightly increased compared to the previous week, as citizens continue to call for authorities to provide financial aid and basic goods. In Colombia, citizens protested in several neighborhoods of Bogotá city to demand food and the provision of emergency income payments for workers. In Venezuela, fuel shortages continued to drive citizens to the streets, with fishermen, merchants, and farmers claiming they are unable to transport their products.

In Colombia, the number of political killings increased compared to the previous week. Three people were killed and four injured by members of a Revolutionary Armed Forces of Colombia (FARC) dissident faction, and a social leader and three members of his family were shot dead by unidentified armed men. Both events occurred in Cauca department, a highly militarized area where several criminal groups dispute coca production territories. “Armed groups, as well as criminal groups, appear to be taking advantage of the fact that most of the people [there] are in lockdown to expand their presence and control over the territory” (OHCHR, 24 April 2020).

In Brazil, Chile, Colombia, Ecuador, Paraguay, Peru, and Venezuela, health workers protested demanding better working conditions and proper protective equipment as they treat patients infected with the coronavirus. In Brasília city, Brazil, during a silent protest to honor the dead, health workers were attacked by supporters of President Jair Bolsonaro. Healthcare specialists have raised concerns that Latin America’s underfunded public health systems are at risk of collapse, as the region faces a rising number of confirmed cases and deaths (AS-COAS, 4 May 2020, Brookings Institution, 26 March 2020).

In Argentina, citizens performed pot-banging protests in several cities against a decision made by local judges to release prisoners during the pandemic. As of 29 April, more than 700 inmates from prisons in Buenos Aires have been released over concerns of poor hygienic conditions inside the facilities.

Demonstrations significantly increased in Chile following President Sebastian Pinera’s call on public employees and private businesses to re-open the economy. On Labor Day, multiple protests were reported across the country to demand better working conditions and government support to mitigate the economic crisis worsened by the coronavirus pandemic. In the Metropolitan region, police officers opened fire on a group of protesters, injuring at least 10 people. Several clashes between demonstrators and state forces broke out around the country.

In Brazil, workers mainly from the tourism and transport sectors protested in several cities against financial losses due to social distancing measures adopted to prevent the spread of the coronavirus. In Manaus and Curitiba cities, journalists were physically assaulted by demonstrators while covering the events. Also in Curitiba city, supporters of President Jair Bolsonaro clashed with supporters of the former Minister of Justice, Sergio Moro, as Moro was summoned to provide evidence that the President was trying to obtain privileged and confidential information about ongoing Federal Police investigations.

The number of armed clashes remained constant in Brazil, as authorities continued to conduct operations aimed at curbing the advance of drug trafficking groups and police militias in several communities. At least 40 people were killed in clashes with police forces, and 12 people were killed in clashes between gangs. In Vila Kennedy, a neighborhood in the West Zone of Rio de Janeiro city, five suspected members of the criminal group Red Command (CV) were killed during a Military Police operation. In the city of Ourinhos, São Paulo, an intense shootout took place between Military Police officers and a criminal group after a bomb attack on a bank branch. At least 40 armed individuals in 10 cars were involved in the clash. The group had advanced weapons including an anti-aircraft machine gun, which they used to attack Military Police bases. The attack is particularly notable for its use of military weapons and high-level strategic planning, such as the use of a drone to monitor Military Police operations and target the bases (G1, 2 May 2020).

The number of attacks on civilians perpetrated by drug trafficking groups and police militias remained steady compared to the previous week, with 35 reported events across the country.