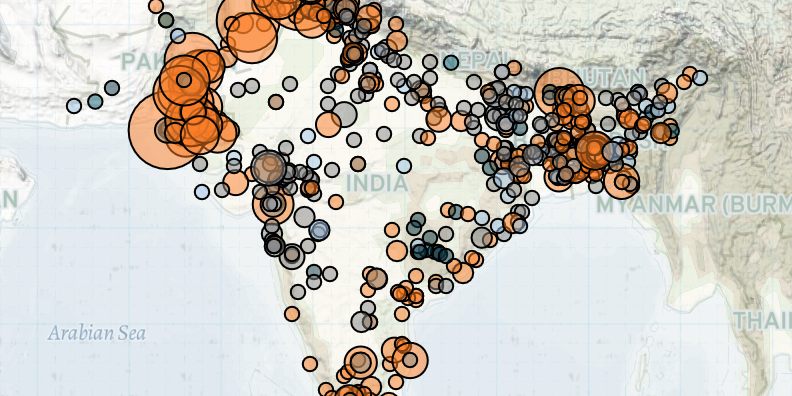 In India, security forces conducted a series of operations last week in Jammu and Kashmir (J&K), following the death of five security personnel during an encounter the previous week. At least five militants were killed during the operations, including the senior commander and operational chief of Hizb-ul-Mujahideen (HM). The death of the HM commander sparked demonstrations and clashes between locals and security personnel across J&K. During the unrest, at least one person was killed and more than 30 were injured, some with bullet wounds. Over the past month, organized violence by militant groups has been on the rise in J&K. The killing of the HM commander is likely to spark more unrest between locals and security forces in the aftermath of the encounter (Al Jazeera, 6 May 2020). Meanwhile, the relatively new militant outfit, Resistance Front (RF), continued attacks on security personnel. Three security personnel were killed in an attack on a security check post in Kupwara district of J&K. Elsewhere in India, four Naxal-Maoist rebels and a police officer were killed during an intelligence-based operation in the state of Chhattisgarh. Reports indicate that Naxal-Maoist rebels are strengthening in numbers along a new “red corridor” situated at the tri-junction of Maharashtra, Madhya Pradesh, and Chhattisgarh states (Hindustan Times, 9 May 2020). For more on continuing conflicts in India despite the coronavirus pandemic, see this recent CDT Spotlight as part of ACLED’s COVID-19 Disorder Tracker.

In Pakistan, organized violence by domestic rebel groups was reported in the restive provinces of Balochistan and Khyber Pakhtunkhwa (KP). In Balochistan, six security personnel were killed in an IED explosion. The Baloch Liberation Army (BLA) claimed responsibility for the explosion as well as blowing up a railway track in Quetta city earlier last week. The province is home to several armed Baloch nationalist groups, including the BLA, which have been battling the Pakistani security forces for over a decade, demanding independence and control over the province’s natural resources. In KP, two security personnel were killed in a militant attack at a security check post.

In India, the government announced in late April that it would allow interstate movement of stranded migrant workers across the country following restrictions to curb the spread of coronavirus. Despite the announcement, several states sealed their borders and restricted movement, leading to unrest and clashes between migrant workers and security forces. About 7,000 migrant workers blocked the Mumbai-Agra highway and pelted stones at police personnel as they were prevented from entering Madhya Pradesh (Times of India, 3 May 2020). Mob violence and violent demonstrations were reported in Gujarat, Madhya Pradesh, Karnataka, Haryana, and Punjab.

In Bangladesh and Nepal, violence was reported over the distribution of ration and relief materials provided to those affected by coronavirus lockdowns. In Bangladesh, a local leader of Bangladesh Awami League (AL) died after he was assaulted following an altercation over alleged irregularities in relief distribution. In Nepal, local government representatives were assaulted by mobs and locals clashed with the police over dissatisfaction with malpractice and  the lack of transparency in the purchase and distribution of relief materials.