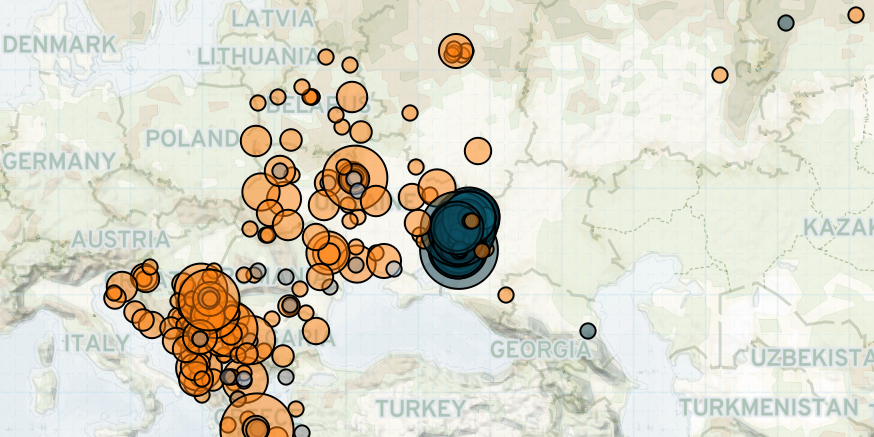 In Croatia, the parliament dissolved ahead of elections that are set to take place 5 July. The dissolution of parliament led to some protests as the parliament has still not adopted a law on the reconstruction of Zagreb following the 22 March earthquake (Balkan Insight, 18 May 2020). Separately, protests were held against 5G technology, particularly its perceived negative health effects. Some protesters demanded that measures to combat the coronavirus be completely lifted.

In Albania, demonstrators clashed with police after the demolition of the National Theater to make way for new development. The opposition and civil society took to the streets denouncing the act as “dictatorship” by Prime Minister Edi Rama (Reuters, 17 May 2020). Protesters in other cities expressed solidarity and held peaceful protests in support of the opposition. Separately, labor protests took place in Vlore and Berat, where workers demanded financial assistance from the government during the coronavirus pandemic.

In Bulgaria, the political party Revival protested against the government’s coronavirus measures and over perceived conspiracies based on disinformation. Former Ombudsman Maya Manolova and mothers of children with disabilities, mobilized as part of the movement ‘the System is Killing Us’, staged anti-government protests and denounced the government’s financial aid during the coronavirus pandemic as inadequate (Dnevnik, 23 May 2020).

In Greece, anarchist activity increased following calls on social media to escalate attacks (Ekathimerini, 19 May 2020). There were coordinated attacks in various parts of Athens in which company vehicles and bank ATMs were torched (AMNA, 18 May 2020) and anarchists clashed with riot police in Thessaloniki (ThessNews, 17 May 2020).

There were violent clashes among groups of migrants in central Mytilene on the island of Lesvos (AMNA, 26 May 2020). In the north of Greece, there were reports of forced deportations of migrants to Turkey by unidentified actors with possible ties to the Greek government (To Vima, 22 May 2020). In the south, hundreds of migrants from the Kranidi camp broke the coronavirus quarantine and marched to Portocheli in protest (To Pontiki, 27 May 2020).

In Cyprus, demonstrations were held in Limassol against migrants and 5G technology, attended by members of United Patriots (SigmaLive, 24 May 2020). Anti-fascists demonstrated outside a migrant camp in solidarity with migrants (Philenews, 25 May 2020).

In Romania, lockdown measures were relaxed and the number of protests remains low. Several protests were over misperceptions relating to various aspects of the coronavirus pandemic, including the perceived negative effects of 5G technology, the spread of the disease, and vaccinations (News.ro, 17 May 2020).

In Moldova, there was a sharp increase in demonstrations due to a nation-wide protest action held by the Equality party (SOR). Demonstrators called for the resignation of President Dodon over corruption, after a video was leaked linking Dodon to the controversial oligarch Vladimir Plahotniuc and possibly accepting illegal funds from Plahotniuc (Ziarul Național, 29 May 2020). Separately, dozens of restaurant workers and market vendors protested for several days in Chisinau, Balti, and Cahul, demanding the lifting of the coronavirus restrictions on their businesses (Ziarul de Gardă, 27 May 2020).

In Belarus, thousands of people gathered to participate in and protest at electoral pickets in at least nine cities amidst rising anti-Lukashenka sentiment, led by blogger Syarhey Tsikhanouski who collected signatures for his wife’s presidential candidacy in protest over the decision to ban him from the race (RFE/RL, 27 May 2020). The government’s arbitrary arrest of Tsikhanouski has increased his popularity and bolstered public interest in the presidential campaign (Viasna, 30 May 2020).

In Russia, residents protested for a week against plans to unify the Nenetsk Autonomous Province with its larger neighboring province of Arkhangelsk (Meduza, 28 May 2020). Medical workers continued to protest demanding that authorities pay them their promised coronavirus pay increases (Regnum, 21 May 2020). Multiple protests by local business owners took place, calling either to be included in the groups of businesses allowed to reopen under the eased lockdown measures (Vesti Voronezh, 22 May 2020), or for direct financial assistance (Caucasian Knot, 29 May 2020).

Protests were held after a well-known journalist at Novaya Gazeta, as well as several other activists, were arrested and sentenced to prison for taking part in coordinated one-person protests (Meduza, 1 June 2020). Armed clashes were reported involving alleged Islamic militants in Dagestan (Caucasian Knot, 23 May 2020) and Ingushetia (Caucasian Knot, 30 May 2020), with six and two fatalities among the alleged Dagestani and Ingush militants, respectively.

In Ukraine, demonstrations increased over various labor and corruption issues unrelated to the coronavirus crisis. In particular, over 30 anti-government demonstrations were held criticizing the government’s reconciliatory Donbas policies and demonstrating against the continuing influence of pro-Russian politicians (Euromaidan Press, 25 May 2020).

Parties to the Trilateral Contact Group on Ukraine continued to discuss the next prisoner exchange, the disengagement of forces, and elections in Donbas without reaching any new agreements (Ukraine Presidential Office, 28 May 2020). The rebel groups expressed their dissatisfaction with the results of recent negotiations and announced that they are placing their troops on combat alert (Unian, 28 May 2020). Despite this, fighting between Ukrainian government forces and separatist rebels decreased in the week of 24 May. In total, 202 armed clashes and shelling incidents were reported last week resulting in one reported fatality, compared to 285 incidents resulting in two reported fatalities the week prior.