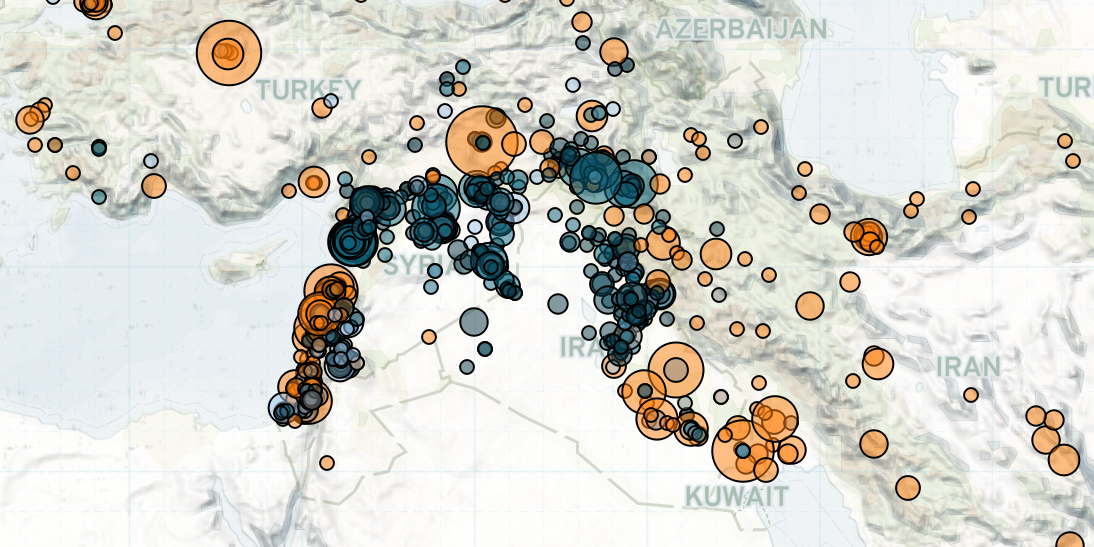 Over the last two weeks in the Middle East, political violence and demonstration activity generally decreased across the region, likely due to the end of the holy month of Ramadan and coronavirus-related restrictions. Key developments include: a significant increase in airstrikes by the Saudi-led coalition in Yemen, as well as Houthi retaliation; demonstrations over shortages in basic resources like electricity and water in Yemen, Lebanon, Iran, and Iraq; a rise in battles and remote violence between the Turkish military and the Kurdistan Workers’ Party (PKK); and heightened tensions in the West Bank and East Jerusalem after the reported killing of two Palestinians.

In Yemen, conflict along major frontlines continued despite the spread of the coronavirus (Time, 28 May 2020), with fighting between Houthi and joint anti-Houthi forces along the Marib-Al Bayda border and the Marib-Sanaa border, as well as in Al Hodeidah, Al Jawf, and Ad Dali. Likewise, conflict continued in the area to the north and east of Zinjibar city, capital of Abyan governorate, between pro-Southern Transitional Council (STC) and pro-Hadi forces, despite a three-day truce for Eid Al Fitr (Middle East Monitor, 26 May 2020). Although infighting has escalated among anti-Houthi forces, the Houthis have not been able to capitalize on the divisions and seize significant territory elsewhere. Notably, airstrikes by the Saudi-led coalition have significantly increased, hitting over 100 separate locations throughout Houthi-controlled territory and frontline positions over the past two weeks. While the ceasefire unilaterally declared by the Saudi-led coalition ended over the Eid holiday, this did not mark a dramatic increase in the number of airstrikes because they continued to occur throughout the ceasefire.

In Saudi Arabia, Houthi forces fired at least two ballistic missiles at Riyadh and Jizan on 26 May 2020. Both missiles were reportedly intercepted by Saudi air defenses, though the missile in Jizan fell on a house and reportedly injured three of its occupants. These attacks represent the first Houthi attempt to strike deep into Saudi Arabia since 28 March 2020, when the same locations were reportedly targeted.

In Aden, significant public unrest over the inadequate provision of basic needs, especially electricity, resulted in protests. One man was injured by fire from Security Belt Forces on 21 May, while another set of protests blocked streets on 30 May. The STC has controlled Aden since late January 2018 and declared self-administration in April 2020.

There was an increase in demonstrations in Lebanon last week mainly related to the rationing of electricity and the general amnesty draft law. Families of prisoners demanded that the law be passed and implemented, while others demonstrated against the law due to a provision that would pardon ex-militants that collaborated with Israel (Middle East Eye, 29 May 2020).

In Iran, in addition to a number of labor and economic protests over the last two weeks, one violent demonstration was held in Gheyzaniyeh against frequent water shortages. Protesters blocked a road with burning tires and attacked the police with stones and sticks. Police shot tear gas and rubber bullets at demonstrators, injuring several people (RadioFreeEurope, 26 May 2020).

In Iraq, protests increased slightly following the announcement of the new government, particularly in Kut, Basra, and Nassriya cities. Most of the protests called for the dismissal of the local governments and demanded investigations into the deaths of protesters. However, by the Eid holiday, these protests were largely suspended. At the same time, protests over the inadequate provision of public services rose, which is common for the summer when Iraq faces a growing number of electricity cuts. A handful of protests over the economic fallout from coronavirus-related business closures also took place. These will likely increase in the coming weeks as reported cases of the coronavirus continue to rise, which could result in an extension of the curfew and lockdown measures.

Following a month of high Islamic State (IS) activity, there was a relative decrease over the past two weeks. The lull may be linked in part to anti-IS operations launched by Iraqi military forces as well as the Popular Mobilization Forces (PMF), in addition to the total nationwide lockdown and curfew imposed during Eid, which could have prevented IS from carrying out major attacks on civilians. Moreover, the global coalition against IS launched an airstrike in Syria that reportedly killed Mutaz Numan Abd Nayif Najm Al Jaburi, known as the ‘governor of Iraq’, and the foreign operations head of IS. It also captured Abd Al Nasser Qirdash, the reported candidate to succeed Abu Bakr Al Baghdadi as the group’s leader. These blows could significantly impact the group’s capacity to launch attacks, but only time will tell if IS can regroup and once again intensify their operations in Iraq and Syria.

Meanwhile, instability in opposition-held areas in northern Syria increased, with fighting among various opposition factions on both banks of the Euphrates, from Afrin to Ras al Ain. Elsewhere, IED attacks and assassinations by IS and unidentified groups continued to target regime and Syrian Democratic Forces (QSD) elements in eastern Syria. In the south, assassinations targeting regime forces and former opposition fighters continued despite military reinforcements in the area.

Engagements between the Turkish military and the PKK intensified in Iraqi Kurdistan and Turkey. On 26 May, Turkish military forces also conducted a drone strike targeting a car carrying Kurdistan Free Life Party (PJAK) militants in the village of Safra in Mawat, Sulaymaniyah (Rudaw, 29 May 2020). Turkish military engagement with PJAK is uncommon, and the strike took place further south than the military usually operates. This could signal an expansion in Turkey’s military activity in Iraq.

Additionally, there were multiple reports of violence by Turkish security forces against civilians in Ankara, Istanbul, Tekirdag, and Burdur provinces for violating the coronavirus curfew order. Health workers held several demonstrations to protest their working conditions during the pandemic and salary disparities, particularly between those who work in departments treating coronavirus patients and those in other departments.

In Palestine, following an announcement that Palestinian leadership had dissolved security agreements with the American and Israeli governments on 19 May, two Palestinians were killed by Israeli forces. Near the village of al Nabi Saleh, a Palestinian was shot and killed by Israeli forces after allegedly attempting to carry out a car-ramming attack on soldiers (Al Ghad, 29 May 2020). A day later, Israeli forces in East Jerusalem shot and killed an autistic Palestinian when he failed to stop at their command who they mistakenly thought was armed (Time, 31 May 2020). Violence may intensify as Palestinian leadership steps away from agreements made with the US and Israel due to the Israeli government’s plans to annex areas of the West Bank.