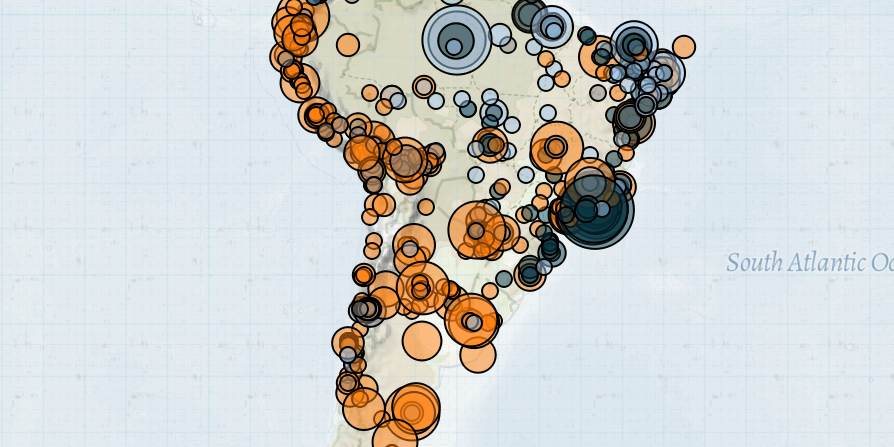 Over the past two weeks in South America, key developments include: protests led by health workers around the region; demonstrations over the economic impact of the coronavirus in Argentina, Ecuador, Chile, and Venezuela; political killings in Colombia; demonstrations in Bolivia calling for general elections; occupation of a private mine by local workers in Suriname; and demonstrations against quarantine measures in Brazil, as well as continued armed clashes between criminal groups and state forces.

Health workers continued to protest across the region, with events reported in Argentina, Brazil, Chile, Ecuador, Paraguay, Peru, and Venezuela. The protesters call for better working conditions and proper protective equipment as they treat patients infected with the coronavirus. Recently, experts from the World Health Organization (WHO) declared that South America has become the new pandemic center of the disease (The Guardian, 22 May 2020).

Likewise, the economic impact of the pandemic led to protests around the region. In Argentina, workers from several sectors continued to protest for the third consecutive week across multiple cities to demand an end to quarantine measures and the reopening of businesses. With a strict lockdown implemented since mid-March, economic activities have been severely affected, worsening the country’s debt crisis (BBC News, 30 May 2020). In Ecuador, students and workers took to the streets after the government announced a cut to the budget for public universities and the closure of state-owned companies. In Chile, demonstrations over food shortages were held in several districts of the Metropolitan region, with citizens demanding food assistance from the national government. Clashes between rioting mobs and the police were reported after looting attempts at stores and supermarkets. The events followed President Sebastian Piñera’s announcement of stricter quarantine measures in Santiago, in light of an increase in confirmed coronavirus cases. In Venezuela, citizens continue to demand the distribution of potable water, fuel, and electric power amidst an economic crisis worsened by the pandemic.

Political killings continued in Colombia, largely matching the weekly average for the year, with eight killings reported over the past two weeks. Between 17 May and 30 May, three social leaders were killed in separate events in the departments of Bolívar, César, and Vichada. Two former members of the Revolutionary Armed Forces of Colombia (FARC) were also killed in the departments of Cauca and Huila. In Cauca department, a former member of the National Liberation Army (ELN) and two traditional doctors and members of an indigenous group were killed by unidentified armed men in two separate events. For more, see ACLED’s CDT Spotlight on attacks against civilians in Colombia.

Meanwhile, in Bolivia, supporters of former President Evo Morales and his political party, the Movement for Socialism (MAS), continued to hold demonstrations for the third consecutive week, demanding new presidential elections and the lifting of the lockdown.

In Suriname, local miners stormed the gold mining concession owned by Boss Enterprises. They claimed the land is part of their communal forest and therefore they have the right to exploit it. The same mine was occupied by the miners in March this year as well.

In Brazil, protests and motorcades calling for an end to social distancing measures and the re-opening of businesses continued to be reported across the country. Following pressure from different sectors, several cities launched plans to gradually reopen economic and social activities. The moves come even as approximately 1,000 coronavirus-related deaths are confirmed each day, with the overall toll now exceeding 30,000 (BBC News, 31 May 2020).

The number of clashes between armed groups and state forces slightly declined in Brazil. Still, police operations conducted in Rio de Janeiro state continued to be in the headlines. Two civilians were shot dead during different Military Police operations in the North Zone of Rio de Janeiro city, and in São Gonçalo city. Locals claimed that in both events the victims were distributing food in coordination with non-governmental organizations in vulnerable communities. In another event, a 14-year-old boy was shot dead inside his house during a joint Federal and Civil Police operation in Salgueiro Complex, São Gonçalo city. Witnesses claimed that the officers had been warned that only children were inside the house. Human rights groups criticized police conduct in the favelas, as civilians continue to be caught in the crossfire during operations aimed to curb drug trafficking groups (G1, 23 May 2020).

The number of attacks on civilians perpetrated by drug trafficking groups and police militias remained steady in the past two weeks, with a total of 53 reported events across the country.