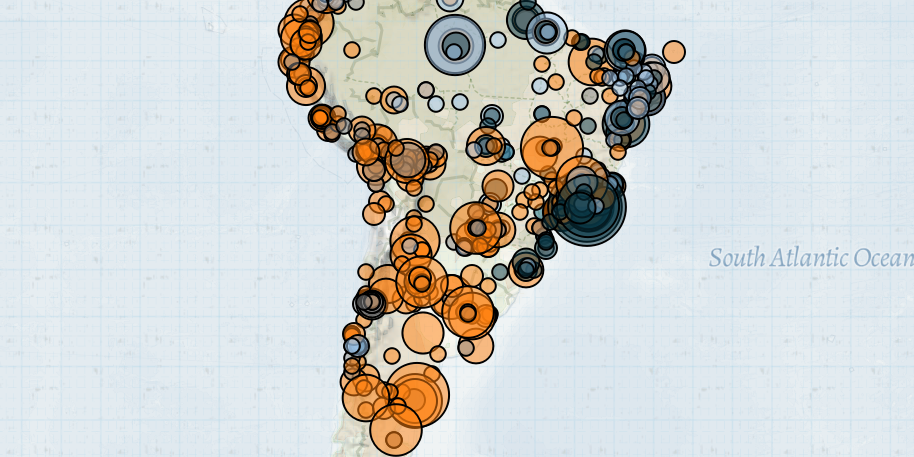 Last week in South America, key developments include: demonstrations over coronavirus-related issues in Argentina, Colombia, Peru, and Venezuela; the killing of a Mapuche indigenous leader in Chile; protests against gender-based violence in Argentina; protests against racism and police brutality in Brazil and French Guiana; and demonstrations both for and against President Jair Bolsonaro in Brazil, as well as territorial disputes between criminal groups.

Pandemic-related demonstrations were reported around the region. In Colombia, teachers protested in several cities following the government’s announcement that schools would gradually reopen. They claimed the decision was unilateral and that the education community was not consulted. In Argentina, health workers protested across the country calling for proper protective equipment and the payment of delayed salaries. Health workers in Peru also took to the streets to demand a bonus for treating coronavirus patients. In Venezuela, citizens continue to demand the distribution of potable water, fuel, and electric power amidst an economic crisis worsened by the pandemic. The lack of fuel remains the main motivation for protests. More than a million barrels of gasoline were sent from Iran to Venezuela by the end of May, but it has not been enough to meet domestic demand (EFE, 4 June 2020).

In Argentina, several protests were reported across the country on the five-year anniversary of the movement “Ni una menos” (Not one [woman] less). The movement, which spread across Latin America in 2015, campaigns against gender-based violence, calling for justice for femicide victims and safe abortions, among other demands (Infobae, 3 June 2020).

In Chile, tensions increased in the country’s south following the killing of a Mapuche indigenous leader by unidentified armed men in the rural area of Collipulli, in Araucanía. The victim had previously reported several cases of excessive use of force by police officers against Mapuche community members in the region (Radio Cooperativa, 6 June 2020). Meanwhile, attacks led by suspected indigenous militias continue to take place, as the Mapuche group fights for the restitution of land rights in areas controlled by forestry companies.

In Brazil and French Guiana, protests were reported against racism and police brutality after the death of George Floyd in the United States. In Brazil, protesters demanded justice for black victims of violence in cases that remain unsolved, such as the death of João Pedro, a teenager recently killed in his home during a police operation in São Gonçalo. In French Guiana, a group of protesters burned US flags and marched against violence targeting the black community.

Protests both for and against President Jair Bolsonaro were reported in several cities of Brazil, with an increase in the number of demonstration events against the President. Meanwhile, Sunday protests in support of Bolsonaro have become common in several cities, including in the capital, Brasília, where the President often shows up to greet his supporters. In São Paulo city, both groups of demonstrators clashed in Paulista Avenue over a far-right neo-Nazi flag carried by Bolsonaro supporters. Tensions in the country remain high following a recent federal police investigation targeting Bolsonaro supporters over allegations of running a fake news network (The Guardian, 27 May 2020).

The number of clashes between armed groups and state forces remained constant in Brazil, as authorities continue to conduct operations aimed at curbing the advance of drug trafficking and police militias in the country. Criminal factions have continued to expand their territory in the state of Rio de Janeiro, despite the quarantine. Several clashes between the Red Command (CV) and the Pure Third Command (TCP), the main criminal groups active in the state, were reported in Niterói city and in the North Zone of Rio de Janeiro city. In Niterói, intense shoot-outs were reported for three consecutive days in Morro do Estado, a community disputed by both gangs. In Rio de Janeiro, an incursion by the CV in Morro do Fubá ended with three TCP members killed. The TCP, known for its links with police militias, fights against the CV, one of the oldest drug trafficking groups in the country, for the control of territories and markets in the state’s main cities.

The number of attacks on civilians perpetrated by drug trafficking groups and police militias decreased compared to the previous week, with a total of 18 reported events across the country.