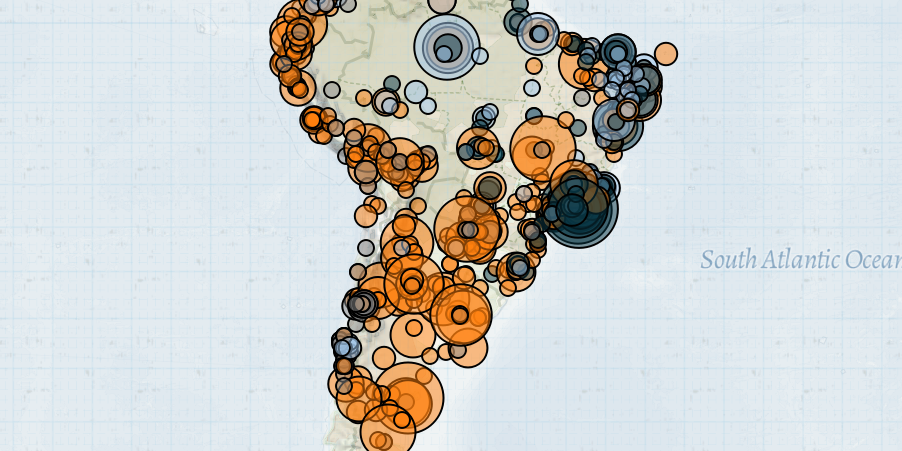 Last week in South America, key developments include: demonstrations over coronavirus-related issues across the region; demonstrations against government policies in Argentina and Chile; political killings in Colombia and Paraguay; and protests against racism and police brutality in Brazil, as well as continued armed clashes between criminal groups and state forces.

Pandemic-related demonstrations were reported around the region. In Argentina, health workers protested for the second consecutive week across the country calling for proper protective equipment and the payment of delayed salaries. In Colombia, threats against a doctor from Barranquilla sparked protests in several cities, as health workers fear for their safety amidst the pandemic. Workers, farmers, and lawyers also protested to demand aid from local authorities and the reopening of workspaces. In Ecuador, thousands of workers, students, and health workers took to the streets in the country’s main cities to protest against economic measures approved by the government to address the pandemic. In Paraguay, motorcades were reported in the border cities, as workers called for subsidies and debt freezes in the face of the economic crisis caused by the prolonged closure of the tri-border area between Argentina, Brazil, and Paraguay. In Venezuela, citizens continue to demand the distribution of potable water, fuel, and electric power amidst an economic crisis worsened by the pandemic. The lack of fuel remains the main motivation for protests.

In Argentina, several pot-banging protests and motorcades were reported across the country against the government’s recent decision to nationalize one of the largest grain exporter companies, the Vicentin. President Alberto Fernández claimed the decision is aimed to save the company from bankruptcy and to secure about 7,000 jobs. Critics, however, denounce the decision as unilateral and argue that the move will override legal steps provided by current insolvency regulations, sending a negative sign to national and international investors (El Dia, 10 June 2020).

In Chile, fishermen held demonstrations after the Constitutional Court accepted an industrial fishing company’s legal request to review a rule that only allows cuttlefish catching by artisanal methods. In several regions, demonstrators violently clashed with police forces. Fishing in Chile is a major industry responsible for a significant part of the country’s GDP. Small fishing communities, however, fear that the growth of large industries could negatively impact the income of more than a million Chilean citizens, which includes workers and their families (La Republica, 8 June 2020).

In Colombia, members of the Gulf Clan killed three people near a Territorial Space for Reincorporation and Training (ETCR) camp in Antioquia department. One of the victims was the son of a former member of the Revolutionary Armed Forces of Colombia (FARC) In Meta department, the son of another FARC member was also killed by unidentified armed individuals near an ETCR camp. The ETCR areas were created by the Colombian government for training and early reincorporation activities to facilitate the integration of former FARC combatants back into society (Agencia para la Reincorporación y Normalización). There are concerns that the camps cannot guarantee the safety of former fighters housed in the facilities, as several residents have been killed in recent years (Insight Crime, 1 November 2019).

In Paraguay, the bodies of two members of the Paraguayan People’s Army (EPP) were found near the border city of Pedro Juan Caballero. The police believe the men, who are brothers, were executed by a local drug trafficking group. The EPP, the main insurgent group active in Paraguay, is a small left-oriented armed organization that aims to revendicate expropriated land belonging to businessmen. The group conducts sporadic attacks on farms along the border with Brazil, but it has also been involved in extortion and kidnapping targeting political authorities in recent years.1Not all activity that the EPP engages in is coded by ACLED, given their ties to drug trafficking (Insight Crime, 19 January 2018). For more, see this primer on ACLED methodology around coding gang violence.

On 7 June, protests against racism and fascism were reported in at least 20 state capitals and several other cities in Brazil. Protesters criticized President Jair Bolsonaro’s government and his regular verbal attacks on democratic institutions. Supporters of the Black Lives Matter movement also took to the streets, demanding justice for black victims of police brutality in Brazil, and calling attention to violations of minority rights in the country, including discrimination faced by indigenous communities.

In Brasília city, police officers evicted members of a far-right group who had been camping near the National Congress since the beginning of May. The group, comprised of Bolsonaro supporters, is under scrutiny as its leader is currently being investigated over allegations of taking part in a fake news network attacking political opponents of the president (Estado de Minas, 13 Jun 2020).

The number of clashes between armed groups and state forces slightly declined in Brazil. In Rio de Janeiro state, the number of police operations decreased following a Supreme Court decision prohibiting operations in communities during the coronavirus pandemic. The decision comes on the heels of intense public backlash after a teenager was killed in the crossfire between state forces and drug trafficking groups. Still, police activity continues to be reported in some areas, especially in São Gonçalo city.

Despite the decline in clashes, the number of attacks on civilians perpetrated by drug trafficking groups and police militias significantly increased compared to the previous week, with a total of 26 reported events across the country.