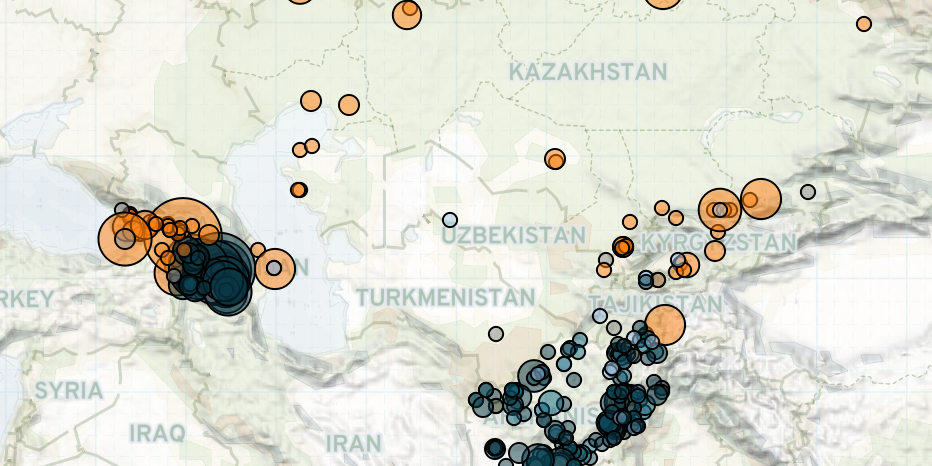 Last week in Central Asia and the Caucasus, a spike in deadly clashes between Afghan forces and the Taliban overshadowed the peace process, with civilians targeted amid the fighting. The number of coronavirus cases surged in Kazakhstan and Kyrgyzstan, resulting in new restrictions, while authorities violently enforced pandemic-related regulations in Uzbekistan. The first anniversary of the anti-Russia protest movement was marked with more demonstrations in Georgia, while the detention of an opposition leader sparked protests in Armenia. Lastly, ceasefire violations continued at similar levels on the Armenia-Azerbaijan-Artsakh Lines of Contact.

In Afghanistan, continued clashes between Afghan forces and the Taliban resulted in a high number of fatalities. Over one hundred1This number will likely be updated to reflect a higher count as further reports come in. Afghan security forces were reportedly killed (RFE/RL, 22 June 2020), as the Taliban conducted particularly deadly attacks in eastern Paktika, Kapisa, and Ghazni provinces as well as in the Aqcha district of Jowzjan. Afghan forces also launched operations against the Taliban, regaining control over four villages in Kapisa. With the fighting threatening to derail upcoming intra-Afghan meetings, the NATO Secretary-General called on the Taliban to reduce violence, and the head of the United Nations Assistance Mission in Afghanistan met the Taliban political team in Doha in an effort to keep peace talks on track (VOA, 22 June 2020).

Civilians also came under attack intensively last week in the country. Unidentified groups killed a religious leader in Baghlan, raided civilian homes in Logar and Khost, and killed at least seven students with a mortar shell planted inside a religious school in northern Takhar province (Anadolu Agency, 18 June 2020). Additionally, the Afghan government accused the Taliban of kidnapping dozens of civilians last week (Reuters, 21 June 2020), whereas the Taliban claimed Afghan forces also attacked civilian targets, including a wedding ceremony in Kapisa, which was hit with mortars and shelling. Nevertheless, the Taliban announced that it released 35 more Afghan prisoners last week, in line with the US-Taliban agreement (Pajhwok Afghan News, 18 June 2020).

In Central Asia, Kyrgyzstan and Kazakhstan tightened coronavirus restrictions following an increase in new cases (RFE/RL, 20 June 2020). In Kazakhstan, a demonstration took place in the town of Taraz after the authorities shut down the local market due to new infections. Meanwhile, protests related to the coronavirus outbreak continued, with the economic fallout affecting vulnerable groups such as health workers, women, and small business owners. Although President Kassym-Jomart Tokayev claimed that the situation was ‘under control,’ former President Nursultan Nazarbayev was also diagnosed with COVID-19 last week, raising concerns about the intensity of the outbreak as it begins to reach political elites (Eurasianet, 18 June 2020).

In Kyrgyzstan, violence against women prompted unrest amid the second wave of coronavirus cases. A video showing a man physically abusing his wife was circulated through social media, triggering a protest in Bishkek city as activists called on authorities to address the issue. Bridal kidnapping and spouse abuse are common in the country, and according to a recent United Nations report, curfews imposed during coronavirus crisis have worsened the situation and increased reported domestic violence cases by 65% in the first quarter of 2020, compared to the same period in 2019 (UN Kyrgyzstan, 15 May 2020).2Such cases of domestic violence are not captured in ACLED data, which focus specifically on political violence and demonstrations.

In Uzbekistan, security forces reportedly attacked civilians in two separate incidents for not wearing face masks during the public health crisis. One of the incidents was filmed by nearby witnesses, and the video showed a police officer pressing his knee into the neck of a young man in Uzbekistan’s autonomous Karakalpakstan Republic, while another person in Surkhardarya region claimed that National Guard personnel severely beat him for the same reason (RFE/RL, 17 June 2020). During the previous week, a person was allegedly killed under torture while in police custody in Andijan city, prompting an investigation and the arrest of the involved officers (Gazeta.uz, 13 June 2020).

In Georgia, protest events increased last week as opposition groups gathered in Tbilisi to mark the anniversary of the anti-Russia protests of June 2019, which were triggered by a Russian lawmaker occupying the parliament speaker’s chair during his visit to the city (Eurasianet, 19 June 2020). Thousands of protesters, wearing masks and maintaining social distance, gathered in Tbilisi, while similar protests took place in Batumi and Kutaisi.

In Armenia, the detention of Gagik Tsarukyan, the leader of Armenia’s largest opposition party, Prosperous Armenia, sparked protests in Yerevan for three consecutive days as his supporters gathered around the city. Tsakuryan, who is also a prominent businessman, is accused of corruption and bribing voters in the 2017 elections (JAM News, 17 June 2020). Police forces intervened in the protests, stating that social distancing rules were violated, as the state of emergency remains in place due to the ongoing coronavirus crisis.