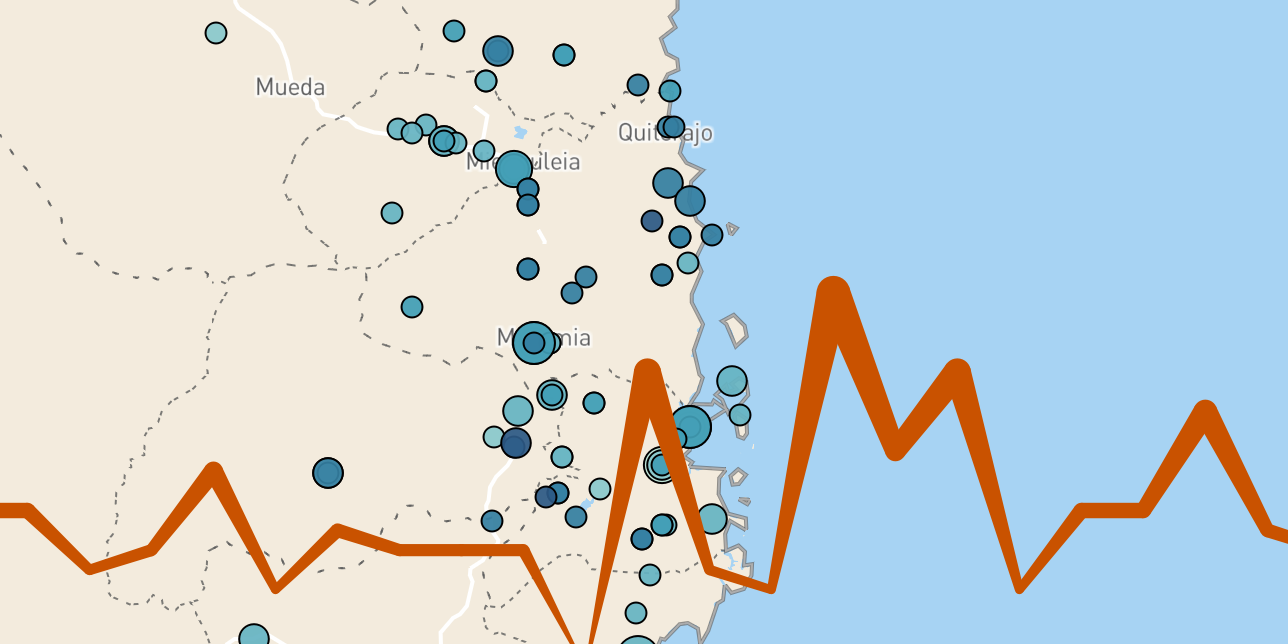 Insurgents and government forces alike spent the last week licking their wounds and consolidating their positions after the insurgents’ most recent occupation of Mocimboa da Praia town in late June. Reports this week include two incidents, as well as further updates on the toll of the battle for Mocimboa da Praia.

The first incident took place in Mocimboa da Praia, with an eyewitness reporting that members of Mozambique’s security forces shot and killed four civilians in the town during a daytime patrol on 7 July. Though that is the first clear report of deadly violence by security forces against civilians since the government regained control over Mocimboa da Praia and the circumstances are murky, the reported killings fit a pattern of government troops being quick to use violence against civilians, especially in Mocimboa da Praia town. Savana also reported shooting in Anga, a village about 10 kilometers southeast of Mocimboa da Praia town, on the same day, which it attributed to insurgents.

The next day, 8 July, a group of 13 civilians traveling from Mucojo to Ilala, in Macomia district, were waylaid by insurgents who attempted to kidnap them. The travelers scattered and escaped, most of them returning to Mucojo later that day. A further report came through of a 12 July attack on Awasse, Mocimboa da Praia district, but no details are forthcoming.

Information on the results of the most recent battle for Mocimboa da Praia continues to emerge. Local sources estimate that at least 40 civilians were killed in Mocimboa da Praia during the fighting, and that insurgents kidnapped at least 28 children in just the town’s Unidade neighborhood, with other kidnappings reported elsewhere. Media reports also described insurgents beheading local civilians who were associated with the government, either as school teachers or workers for the Frelimo party (HumAngle, 9 July 2020).

The situation in Mocimboa da Praia remains fluid, with state security forces urging civilians to leave the town and its civilian leadership reporting that government services have been shut down (O Pais, 7 July 2020). Local business owners have reached out to Mozambique’s Chamber of Commerce, the CTA, to urge the government to prevent its troops from looting their shops.

One of the ongoing debates about the Cabo Delgado insurgency centers on its local character. How much, analysts ask, is the insurgency a product of structures and grievances local to Cabo Delgado and how much is it the result of outside forces? Historian Eric Morier-Genoud sets about answering that question in a new paper based on substantial fieldwork in Cabo Delgado (Journal of Eastern African Studies, 6 July 2020). Before the insurgency was a violent anti-state group, Morier-Genoud finds, it was a religious group with a history in Cabo Delgado dating back at least to 2007.

The earliest iteration of the group Morier-Genoud found began operating a mosque in Balama district in 2007 under the leadership of a Mozambican man named Sualehe Rafayel who had spent time in Tanzania. Sualehe rejected religious and political beliefs of both local Sufi Muslims and the pro-state Wahhabism practiced by more mainline mosques, and created his own congregation which followed an idiosyncratic but anti-state interpretation of Islam. The rift between Sheikh Sualehe and the mainline Muslim community grew until the Mozambican Islamic Council (CISLAMO) formally denounced him to the state and he was arrested in 2011. He was eventually released, and his whereabouts today are not known.

Morier-Genoud finds no evidence one way or another as to whether Sualehe founded or holds any leadership role in the armed organization that seems today to represent the sect of Mozambican Islam with which he is associated. Either way, Morier-Genoud’s paper offers compelling evidence for the idea that, no matter the role of outsiders in the insurgency today, its roots are local and it is engaged with local questions of governance, politics, and religious practice.

Last week also brought more evidence that this local focus is mixed with a broader, more global view. One of the consistent themes in images from the aftermath of insurgent occupations in Macomia and Mocimboa da Praia is graffiti left by insurgents on buildings and roads (Club of Mozambique, 9 July 2020). The messages place the insurgency in a broader narrative of Islamist uprisings, identifying the fighters variously as “Mujaahid of Mozambique” and “Islamic State,” as well as by the name they are referred to locally, “Al Shabab” [sic]. More interestingly, much of the graffiti is in English, which is at best the fourth- or fifth-most popular language in Cabo Delgado but well-suited for speaking to a global audience. If the insurgency was once narrowly focused on the issues and communities of Cabo Delgado, at least some of its elements are now working on the ground to connect those issues and communities to a larger ideology.

Jacinto Veloso, a Mozambican cabinet member in the 1980s and 90s who currently sits on the government’s National Defence and Security Council, gave an interview last week in which he repeated the idea that the Cabo Delgado insurgents are backed by some outside power intent on blocking natural gas development in Mozambique. It is unclear the extent to which Veloso was speaking for the government, but his sentiment is a clear echo of language Mozambican President Filipe Nyusi has used as recently as June, when he blamed the conflict in part on “external elites” (Agencia de Informacao de Mocambique/All Africa, 2 June 2020). It is a narrative that does not bear up to very much scrutiny, as an effort primarily directed at scuttling the gas projects would presumably include attacks on the gas projects. Government officials’ tendency to point to the gas development as the key issue in the conflict is not likely to go down well with civilians suffering in the conflict zone.

Last week’s national police briefing brought a rare public acknowledgement of a major problem for Mozambican forces in Cabo Delgado: desertions. Police arrested a deserter from Cabo Delgado along with four accomplices in Manhiça province on suspicion of armed robbery. The group was arrested with an AK-47 and some ammunition, but police did not say if the gun was the deserter’s service weapon. Anecdotally, this deserter is just one of many soldiers who have abandoned the fight in Cabo Delgado. Desertions are a problem not just because they hurt the government’s fighting capacity, but because deserters are vectors for equipment, guns, and even their own loyalties to be transferred to insurgents or criminal groups (The New Humanitarian, 12 February 2020; Daily Maverick, 8 May 2020).

Among Cabo Delgado health workers, desertion is less of a problem than the simple inability to do the job in an environment of constant insecurity. Health authorities reported last week that 27% of the province’s health units have shut down, particularly those in Mocímboa da Praia, Quissanga, Macomia, and Meluco districts (O Pais, 12 July 2020). Mobile health teams are trying to fill the gaps, but they are only able to travel in secure areas. The scale of the problem they face has been demonstrated in the last month in Nkomangano, Mocimboa da Praia district, where at least five people have died from diarrhea after fleeing violence in Mocimboa da Praia town (Zitamar News, 14 July 2020). Lack of proper sanitation has also claimed eight lives in Macomia district, which has also seen mass displacement of civilians.

On the international front, South Africa argued about whether it is already deployed in Cabo Delgado, while France and Malawi dipped their toes in the water, considering if they will partner with the Mozambican government in the future.

In South Africa, shadow defense minister Kobus Marais told parliament that South African special operations forces are already deployed in Mozambique, a charge the government of South African President Cyril Ramaphosa declined to answer (News24, 9 July 2020). By law, the South African government is required to inform parliament of any foreign deployment of South African troops, which, analyst Darren Olivier pointed out, makes the confrontation somewhat awkward (@Darren_Olivier, 9 July 2020). There have been no indications from Cabo Delgado of additional South African forces on the ground and, Olivier noted, Marais may have been referring to troops working under the longstanding maritime security deployment known as Operation Copper (Club of Mozambique, 10 May 2020). If South African special operators are in Mozambique on a different mission, it would be remarkable, given the lack of logistical support in Cabo Delgado. Pemba and Nacala are the only viable ports of entry to supply such a mission, and any South African military presence in either port would be quickly noted. In addition, the South African military is currently busy at home supporting police during South Africa’s COVID-19 lockdown, which is causing severe strain on the country’s defense budget (DefenceWeb, 9 July 2020).

Malawi’s new president, Lazarus Chakwera, told his Mozambican counterpart that Malawi deplores the violence in Mozambique and offered support to help end it during a call last week (DW, 6 July 2020). The Mozambique-Malawi relationship is historically somewhat vexed, however, and it is unlikely that Malawi would be Mozambique’s first choice for on-the-ground assistance. A country with rather more to offer is France, and an Africa Intelligence report suggests that Mozambican defense minister Jaime Neto plans to ask the French for satellite imagery and other intelligence support for Mozambique’s counterinsurgency effort (Africa Intelligence, 13 July 2020). Given that French energy giant Total owns the main natural gas project camp on the Afungi peninsula, such a plea may get a sympathetic hearing. 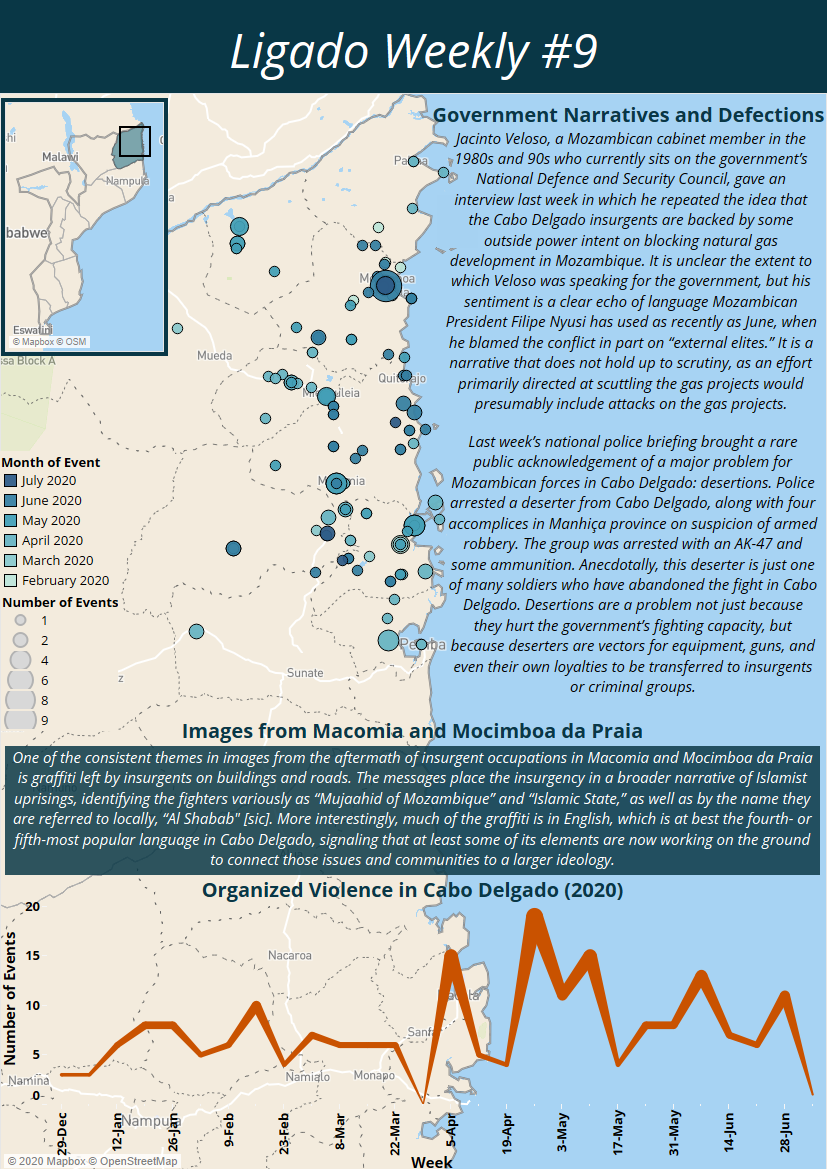 ACLED is the highest quality and most widely used real-time data and analysis source on political violence and demonstrations around the world. Practitioners, researchers, and governments depend on ACLED for the latest reliable information on current conflict and disorder patterns.
14 July 2020
Share
TweetShare on Twitter Share on FacebookShare on Facebook Share on LinkedInShare on LinkedIn