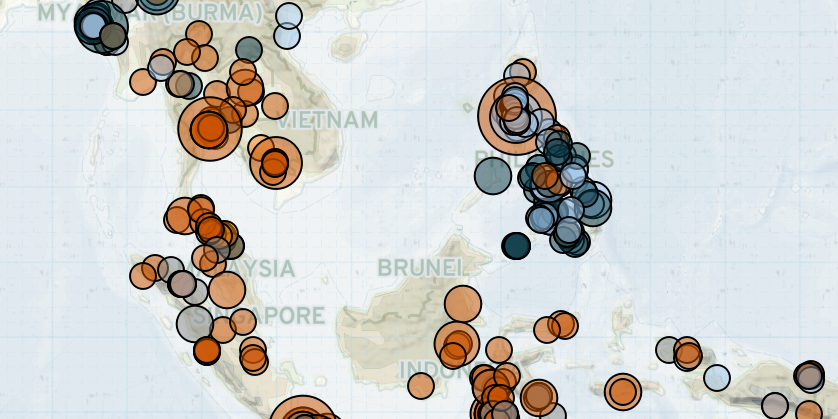 Last week in Southeast Asia, civilians were displaced in Myanmar and the Philippines amid ongoing fighting between state forces and rebel groups. Additionally, demonstrations were reported against the killing of two Papuans by the military in Indonesia, and violence against protesters in Cambodia. Meanwhile, there was a surge in the number of anti-government demonstrations in Thailand.

Following an ambush of a Myanmar military truck by the United League of Arakan/Arakan Army (ULA/AA) on 20 July, fighting between the two parties continued for three consecutive days in Rakhine state. Amid the clashes, at least 3,000 civilians fled their villages (Mizzima, 25 July 2020). This comes as the Brotherhood Alliance, of which the ULA/AA is a part, released a statement on 21 July expressing their interest in attending the government-led peace conference scheduled for August (BNI, 23 July 2020).

In the Philippines, there was a marked increase in fighting between the communist New People’s Army (NPA) and state forces, with multiple clashes reported across the country. As a result of the clashes in Caraga region, dozens of families fled their homes (Mindanao Goldstar Daily, 20 July 2020). The increase in fighting follows reports that a newly formed joint security task force arrested an NPA member who allegedly played a key role in the mass killings in Leyte province in the 1980s (SunStar, 16 July 2020). The arrest was considered a “breakthrough” for the joint task force, which was formed on 3 July, the same day President Duterte signed the Anti-Terrorism Act into law.

In Indonesia, hundreds of Papuans took to the streets after the military killed two Papuan civilians on 18 July. While the military insisted that the victims were West Papua National Liberation Army (TPNPB) rebels, locals in Papua province and rights groups assert that the victims were refugees who had been living in the jungle since the 2018 military crackdown in Nguda district (Reuters, 22 July 2020). Elsewhere in the country, demonstrations against the controversial Pancasila Ideology Guidelines bill decreased following the government’s introduction of a bill on the Agency for Pancasila Ideology Education (BPIP). The BPIP bill includes a ban on communism in Indonesia and thereby plugs the ‘pro-communist’ loophole that the public feared the Pancasila Ideology Guidelines bill would introduce (Indonesian House of Representatives, 16 July 2020).

Meanwhile in Cambodia, family members of detained Cambodian National Rescue Party (CNRP) activists protested for the third consecutive week to demand the activists’ release. The demonstrators have been protesting peacefully since mid-June, but reports over the past two weeks indicate that police have increasingly used force to suppress these demonstrations (Radio Free Asia, 24 July 2020).

Lastly, following a major anti-government demonstration held in Bangkok on 18 July, there was a surge in student-led protests across Thailand last week. Protesters are demanding three things: the dissolution of parliament, an end to state harassment of government critics, and constitutional reform (Al Jazeera, 19 July 2020). This is the first wave of country-wide demonstrations since emergency measures to curb the coronavirus pandemic were put in place in March. While the government recently extended the emergency decree until the end of August, the ban on public gatherings has been lifted (Bangkok Post, 23 July 2020).