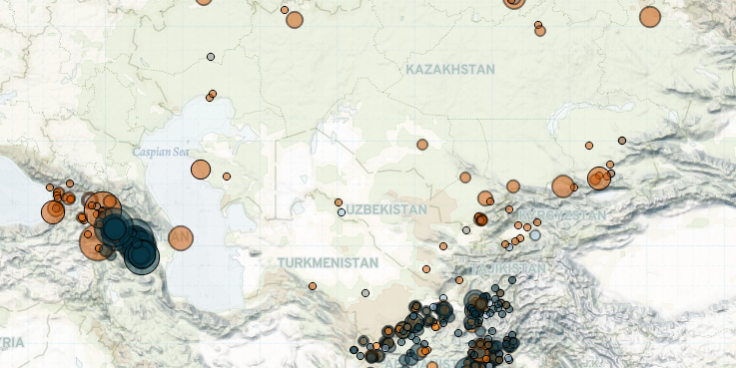 Last week in Central Asia and the Caucasus, the long-awaited intra-Afghan talks began in Doha, Qatar, amid persistent violence in Afghanistan. In Kazakhstan, different labor groups staged protests demanding better labor rights, while claims of police torture continued to spark protests in Georgia’s South Ossetia region. Another political party was excluded from the upcoming elections in Kyrgyzstan, triggering new demonstrations. In Azerbaijan, opposition protests took place upon the conviction of a political figure. Meanwhile, ceasefire violations continued along the Azerbaijan-Armenia-Artsakh Lines of Contact at the same level as weeks prior.

In Afghanistan, following months of stalemate, intra-Afghan peace talks kicked-off in Doha, Qatar on 12 September. The talks started with a call for a ceasefire by the Afghan High Council for National Reconciliation, led by President Ghani’s long-term rival Abdullah Abdullah. However, the Taliban’s negotiation team responded with a strong demand to adopt an “Islamic system” of governance (Al Jazeera, 12 September 2020). The Taliban team is led by a hardline cleric who has overseen the judicial system in Taliban-held areas. He replaced the previous moderate chief just a few days before the talks in Doha (RFE/RL, 10 September 2020). Fears are that the request of an “Islamic system” may endanger the constitutional gains on gender and social equality that are already fragile under the rule of the current war-torn Afghan government (Foreign Policy, 14 September 2020). Nevertheless, these talks already have been historically important, as this is the first official face-to-face engagement of the Afghan government and the Taliban since the US invasion in 2001 (BBC, 12 September 2020).

Still, violence remained steady last week when compared to the week prior. The Taliban continued to attack Afghan forces, launching massive offensives in Dasht-e Archi district of Kunduz, briefly overrunning the district center. The group also conducted frequent attacks in Kandahar province, and claimed territorial gains in Ghazni. Afghan forces also stepped up airstrikes, killing dozens of Taliban militants in Laghman, Balkh, Nangarhar, Helmand, and Kandahar. Moreover, unidentified assailants continued targeting government workers in Parwan, Kandahar, and Kabul. In the Kabul attack, a bomb targeted the Afghan Vice President’s convoy as it was passing through the city, killing ten civilians and injuring more. The Vice President was among the injured. The Afghan government suspects the Haqqani Network, which is affiliated with the Taliban, of conducting the attack.

In Kazakhstan, oil workers of a Chinese company in Mangystau protested against the lay-off of 175 workers. As well, over a hundred coal workers demonstrated in Karaganda, claiming that the partial privatization of the company would lead to lay-offs (RFE/RL, 7 September 2020). Meanwhile, medics of a hospital in Kaskelen township demanded extra pay for their work during the coronavirus pandemic. Labor protests have been on the rise in the country since the coronavirus-related economic hardships exacerbated existing issues around worker rights.

In Kyrgyzstan, yet another political party, Butun Kyrgyzstan, was denied registration in the upcoming elections, similar to the exclusion of the Kyrgyzstan Party, whose exclusion sparked protests during the week prior. This decision was reversed for the Kyrgyzstan Party last week upon the party bringing the case for appeal. Butun Kyrgyzstan party supporters also protested in Bishkek for two days, calling for the denial to be revoked. A Bishkek court upheld the decision to deny the party’s registration citing the election committee’s arguments about the unclear statements in the party’s application untenable. Such decisions ensuring political plurality are crucial because alliances have been inevitable in Kyrgyzstan, with no party gaining more than 30% of the votes since the ousting of the previous president in 2010 (Eurasianet, 25 August 2020).

Meanwhile, in Georgia‘s breakaway region of South Ossetia, protests against the alleged mistreatment of law enforcement officers continued for the third week in a row. The protests originally started after a detainee died under police custody. The detainee was accused of shooting at the Ministry of Interior’s car several weeks ago. The minister, who was inside the car at the time, was not injured, though some people were detained in relation to the attack. Public reactions have already led to the resignation of the government at the end of August, and the president announced that the new government would be formed in the near future. Despite that, around 1,500 people again gathered in Tskhinvali last week demanding an impartial investigation into the death and the resignation of the Prosecutor General as well (RFE/RL, 11 September 2020). Since 2017, several cases of torture have been reported in South Ossetia involving law enforcement, resulting in profound distrust towards the government.

In Azerbaijan, human rights defenders and opposition activists organized several protests in support of Tofiq Yaqublu, a politician who was arrested months ago due to his alleged involvement in a traffic fight in Baku. Claiming the government set this fight up, Yaqublu went on a hunger strike after he was sentenced to four years imprisonment. He had been detained as part of a wave of arrests that started in Azerbaijan after the president, Ilham Aliyev, claimed critics were using the government’s handling of the coronavirus crisis to destabilize the country. However, the detention of Yaqublu, a respected Karabakh war veteran and a strong opposition figure, has resulted in further criticism. Several pro-government MPs have spoken out against his sentence (Eurasianet, 15 September 2020).