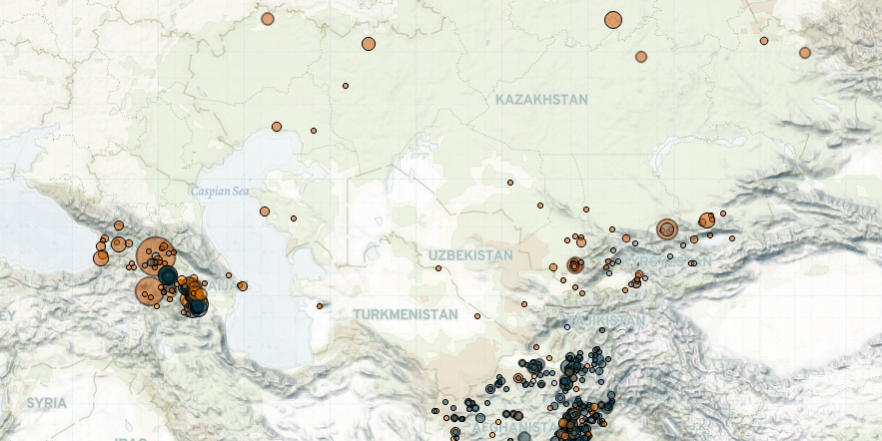 Last week in Central Asia and the Caucasus, clashes between the military forces of Armenia, Azerbaijan, and de facto Artsakh Republic continued despite a humanitarian ceasefire brokered by Russia. In Afghanistan, violence continued between the Taliban and Afghan forces. The Taliban continued to target civilians working for the Afghan government. Additionally, the surprise announcement by United States (US) President Trump to withdraw all US forces from Afghanistan by the end of 2020 was met with concern. Meanwhile, post-election riots continued in Kyrgyzstan as the parliament elected a former lawmaker, who was convicted of kidnapping a mayor in 2017 and freed by rioters the week before last, as the new prime minister.

Clashes continued last week along the Artsakh–Azerbaijan Line of Contact (LoC). For a second week in a row, the most severe confrontations took place in the southern and northeastern parts of the Artsakh-Azerbaijan LoC, in the direction of Jabrayil and Talish regions, respectively.  Armenian and Artsakh authorities reported that Azerbaijani forces, using artillery, missiles and drones, shelled Stepanakert, Shushi, and Hadrut cities, as well as other civilian settlements in de facto Artsakh territory. At the end of last week, Azerbaijan President Ilham Aliev claimed that Azerbaijan’s military forces had captured Hadrut city, which is the administrative center of Artsakh’s Hadrut region. Artsakh authorities, however, denies this. The Azerbaijani side also claims that Artsakh’s military forces targeted Beylakan, Mingachevir, and Ganja cities with missiles.

Attacks on urban areas have inevitably resulted in civilian casualties, though exact numbers remain unknown. Moreover, Azerbaijan claims that a missile fell in the Yevlakh region, very close to the Baku-Tbilisi-Ceyhan pipeline, a strategic infrastructure transporting crude oil to Europe (Caspian News, October 7 2020). Armenian forces also targeted Khizi and Absheron regions, both located in eastern Azerbaijan, far from the frontlines. Armenia also reported the shelling of a village in its southern Kapan region, which neighbors de facto Artsakh territory, but is away from the frontlines.

As of 13 October, the Artsakh Army of Defense had reported 532 military casualties from the start of the fighting on 27 September, while Azerbaijani authorities have not yet released the exact number of military deaths on their side. ACLED records over 110 organized political violence events for the period from 4 to 10 October.

On 9 October, Russian authorities managed to mediate a humanitarian ceasefire after bringing together the Ministers of Foreign Affairs of both Armenia and Azerbaijan in Moscow (BBC, October 13 2020). However, shortly after, both Azerbaijan and Artsakh authorities reported attacks along the LoC, including in Stepanakert and Ganja cities. Meanwhile, in Georgia, neighboring the two countries, two drones fell in the Kakheti region bordering Azerbaijan on 7 October. No information has yet been released about the origin of the drones and their relation to the recent battles over the Nagorno-Karabakh region. The ceasefire crumbling so quickly indicates that clashes are likely to continue. Attacks on civilian areas far from the LoCs also suggests that the parties hold powerful weapons and have been investing in their respective militaries. Considering Azerbaijan’s strict position on claiming the territories captured by Artsakh in the initial ceasefire in 1994 (RFE/RL, 9 October 2020), there may be an even higher number of clashes, as well as civilian and military fatalities, in the upcoming weeks.

In Afghanistan, more than four weeks after intra-Afghan talks started in Doha, Qatar, violence continues between the Taliban and Afghan forces. The majority of last week’s events included Taliban offensives against Afghan forces, including two suicide attacks in Nahri Saraj district of Helmand and in Mehtar Lam district of Laghman where the group targeted the Laghman Governor’s Office. Targeted killings also continued as the Taliban reportedly killed prosecutors, civil servants, and religious scholars in Kabul, Takhar, and Khost. They also abducted the deputy chief of Ghazni jail. In response, the Afghan Ministry of Interior conducted operations against a Taliban squad that had carried out targeted killings (TOLO News, October 5 2020). Meanwhile, Afghan forces seized control of a major highway linking Kunduz and Takhar provinces where clashes with the Taliban had been ongoing since mid-August 2020. ACLED records over 100 Afghan and Taliban fatalities in the clashes that have taken place since then. Increased Taliban attacks and road blockages still occur in other parts of Kunduz province where Afghan forces were reportedly ordered to remain in a defensive position since the start of the talks in Doha (Afghanistan Analysts Network, October 12 2020).

In a separate development, US President Donald Trump said that US troops will withdraw from Afghanistan by the end of 2020. US military officials were reportedly not aware of this decision (AP, October 8 2020). The US originally planned to keep 2,500 soldiers in Afghanistan until 2021. The Taliban welcomed the decision, but NATO Secretary-General Jens Stoltenberg and the Chairman of the High Council of National Reconciliation Abdulla Abdulla expressed concerns (TOLO News, October 10 2020, Voice of Jihad, October 8 2020). The complete withdrawal of US forces would leave Afghan forces without significant support and would allow the Taliban to expand its influence. The decrease in the number of US troops previously has already had a similar effect (Washington Post, October 10 2020). Since the peace deal between the Taliban and US forces was signed in February 2020, ACLED records increases in the number of Taliban attacks on Afghan forces in Kunduz, Balkh, Badghis, and Herat provinces and a higher number of low-level attacks in rural parts of Paktia province.

In Kyrgyzstan, turmoil over the contested results of the parliamentary elections, held on 4 October, continues. Demonstrations in Bishkek and other major cities in Kyrgyzstan continued for most of last week between pro- and anti-government groups. Since 6 October, ACLED records over 60 demonstration events, including violent demonstrations by opposition groups in Bishkek, Osh, and Jalal-Abad cities and in Naryn, Talas, Kyzyl-Kia, Uzgen, and Aksy townships of Kyrgyzstan. The violent uprising has also resulted in mobs of locals attacking mining projects operated by foreign companies in Jalal-Abad, Talas and Naryn regions. Attacks on mines stem from foreign investors being perceived as exploiters of the natural resources in the country, and the government is blamed for allowing such entities to operate freely (Intellinews, 7 October 2020). A gold mine was set on fire by hundreds of anti-government rioters in the Talas region.

In response, Kyrgyz President Sooronbay Jeenbekov declared a week-long state of emergency in Bishkek, although it remains unclear if law enforcement will comply with his order (AP, October 12 2020). Meanwhile, the prime minister of Kyrgyzstan resigned on 6 October amid the turbulence, and Sadyr Japarov, a former lawmaker, was elected as the new prime minister by parliament. Japarov was freed from prison the week after last when anti-government riots broke out following the announcement of the election results. During the riots, groups of demonstrators stormed into detention centers and released convicted opposition lawmakers, including former President Almazbek Atambayev. Japarov was convicted of kidnapping the Issyk-Kul governor in 2017. Immediately after being elected, Japarov said that he had met with the president and asked him to step down, signalling further uncertainty in the near future in Kyrgyzstan (Eurasianet, October 10 2020).