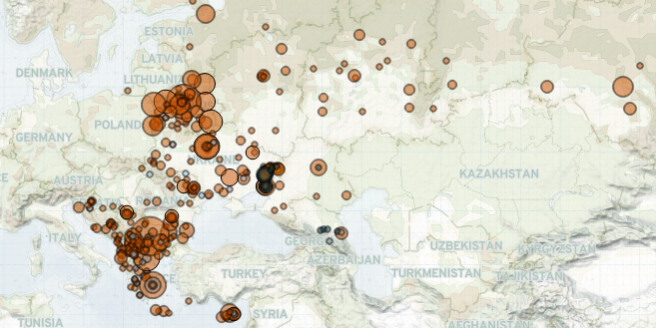 Last week, demonstration activity across Eastern Europe continued at low levels. Large demonstrations continued in Belarus against the regime of Alexander Lukashenko. Anti-government demonstrations in support of former Governor of Khabarovsk Sergei Furgal continued in Russia for the 99th day, though at a diminished scale. Meanwhile, the conservative Turkish-backed candidate won presidential elections in Northern Cyprus, prompting demonstrations and complicating negotiations over the island’s future.

In Belarus, around a hundred thousand people marched on 11 October in Minsk, demanding new elections and the resignation of Alexander Lukashenko (Charter-97, 11 October 2020; RFE/RL, 11 October 2020). The police sprayed teargas, used stun grenades and stun bullets, and arrested around 500 demonstrators. A pensioners’ march for new elections on 12 October also saw use of teargas and physical force by the riot police (RFE/RL, 13 March 2020). The Lukashenko regime provided no indication that it would comply with opposition leader Sviatlana Tikhanovskaya’s ultimatum demanding Lukashenko’s resignation, the release of political prisoners, and the end of crackdown on demonstrators by 25 October (RFE/RL, 13 October 2020). Tikhanovskaya has called for a national strike if these demands are not met.

In Russia, the Khabarovsk demonstrations in support of former-governor Sergei Furgal, whose supporters view his arrest on murder charges as politically motivated, continued into their 99th day, attracting hundreds of people (RFE/RL, 17 October 2020). The demonstrations have declined in size due to a lack of change in the status of the case against Furgal, increasing rates of  coronavirus, and general fatigue. Last week also saw an uptick in violence across the North Caucasus, with armed clashes taking place between Russian government forces and militants in Chechnya, Dagestan, and Ingushetia. The clashes resulted in at least 13 deaths, including at least two security forces (12 October 2020, 15 October 2020, Caucasian Knot, 19 October 2020).

In Northern Cyprus, Ersin Tatar, the preferred presidential candidate of Turkish president Recep Tayyip Erdogan, defeated moderate Mustafa Akinci with Turkish support following the second round of elections on 18 October. These elections will influence future Cyprus peace talks. Tatar advocates a two-state solution that would permanently partition the Greek-Cypriot and the Turkish-Cypriot communities. This would align Turkish-Cypriot policies with those of Ankara. Northern Cyprus is already economically and militarily dependent on Turkey. Akinci favored the pursuit of a federal solution advocating self-determination for Turkish-Cypriots and the reunification of the ethnically divided island (The National Herald, 17 October 2020; Ekathimerini, 18 October 2020). Demonstrations by Greek Cypriots and counter-demonstrations by Turkish-Cypriots took place on both sides of the border following Tatar’s move to open part of uninhabited Varosha, a town which legally belongs to Greek Cypriots though is de facto controlled by Turkish-backed Northern Cyprus, in Famagusta the week before (SigmaLive, 16 October 2020).

In Croatia, a man opened fire with an AK-47 on three policemen guarding the entrance to the parliament building, wounding one of them. The shooter was later found dead by apparent suicide. He was the son of a war veteran and displayed right-wing propaganda on social media and had issued a call to action against “the traitor government.” The incident is being treated as a case of domestic terrorism (Total Croatia News, 14 October 2020).

In Greece, civil servants, including health workers and educators, as well as students, held large strike-demonstrations in Athens and Thessaloniki. They highlighted the problem of understaffing and underfunding during a resurgence in the coronavirus pandemic; there was some rioting in Athens around the issue as well (Ekathimerini, 15 October 2020). These demonstrations continue the trend of demonstrations over concerns about insufficient coronavirus measures, including a major student-led movement that occupied schools across the country in recent weeks.

Lastly, in the Donbas region in Ukraine, fighting between Ukrainian government forces and Russian-led separatists remained at very low levels. There were 24 armed clashes and 36 shelling incidents, with no fatalities reported.