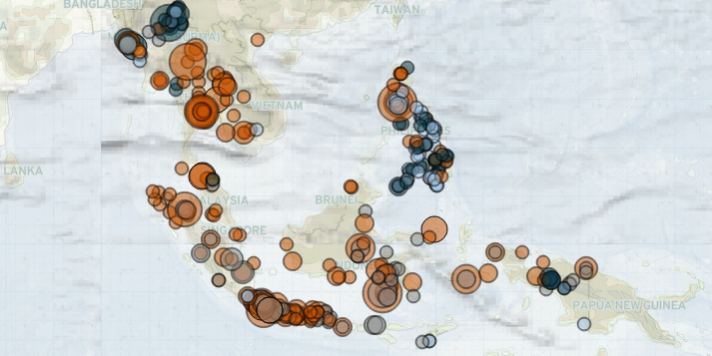 In Southeast Asia last week, fighting between the military and ethnic armed organizations (EAOs) decreased in Myanmar relative to the week prior. Meanwhile, the election commission’s decision to cancel voting for the 8 November general election in various townships in Rakhine and Shan states because of ongoing fighting sparked opposition from various parties. Demonstrations were also reported across the region in Thailand, Indonesia, and the Philippines. In Thailand, anti-government demonstrators held yet another major rally on 14 October to demand the prime minister’s resignation and constitutional reform. The rally prompted the government to declare a state of emergency banning large gatherings, but demonstrations persisted nonetheless. Amid escalating tensions, the police dispersed peaceful protesters by force, sparking widespread criticism. In Indonesia, demonstrations against the recently-passed omnibus law on job creation decreased amid reports of police repression. Lastly, in the Philippines, several demonstrations were held to condemn the state’s treatment of a detained activist whose infant child died after being separated from her. Protesters were opposed to the state’s decision to reduce the time allocated for the activist to attend her child’s wake and funeral.

In Myanmar, clashes between the military and EAOs continued in Rakhine and northern Shan states last week, albeit at a lower frequency compared to the week prior. The military kept up its offensive against a United League of Arakan/Arakan Army (ULA/AA) base in Rathedaung township, Rakhine state that the ULA/AA had taken back from the military the week prior. After a coordinated operation against the ULA/AA by ground, air, and naval military troops on 13 October, the ULA/AA withdrew from their base once again. The clash is believed to be one of the most intense battles the township has seen so far, and villagers have continued to flee from the area (Irrawaddy, 14 October 2020). Meanwhile, fighting persisted in Kyaukme township, Shan state last week, where the military clashed with the Restoration Council of Shan State/Shan State Army-South (RCSS/SSA-S) and the Palaung State Liberation Front/Ta’ang National Liberation Army (PSLF/TNLA). Clashes between the military and the RCSS/SSA-S in Kyaukme township have been reported almost every day in the first two weeks of October, after the military alleged that the group had expanded its territory in northern Shan state (BNI, 9 October 2020). Last week, the RCSS/SSA-S – a signatory to the Nationwide Ceasefire Agreement – expressed its willingness to hold talks with the military to resolve the conflict (Myanmar Times, 15 October 2020).

Separately, ahead of the 8 November general election, Myanmar’s electoral commission (UEC) announced on 16 October a list of locations where elections will not be held due to security concerns (Eleven Media Group, 17 October 2020). Many ethnic parties criticized the UEC’s decision as a political maneuver in favor of the ruling National League for Democracy (NLD) (Irrawaddy, 19 October 2020). The list includes townships that have been relatively peaceful, while excluding others that have been flashpoints of conflict (Irrawaddy, 19 October 2020). The cancelation of polling in nine townships in Rakhine state – considered to be the stronghold of ethnic Rakhine parties – could sow further dissatisfaction and lead to an increase of political violence in the state (The Straits Times, 17 October 2020). Relatedly, three NLD election candidates were abducted by the ULA/AA while campaigning in Rakhine state last week. The ULA/AA has offered to release the detainees if the government releases Rakhine politicians, students, and other civilians detained by the government and military (Irrawaddy, 20 October 2020).

In Thailand, political tensions reached new heights last week following a major anti-government demonstration in Bangkok on 14 October. The rally was held in conjunction with the anniversary of the 1973 uprising — also led by students — that ousted the ruling military government at the time. Demonstrators called for the resignation of Prime Minister Prayut Chan-o-cha, who led the 2014 coup d’etat. The demonstrators also reiterated their demands for reforms to the constitution and the monarchy, as well as an end to the harassment of political dissidents (Al Jazeera, 15 October 2020). In an unexpectedly brazen act of defiance during the 14 October demonstration, protesters chanted slogans at a royal motorcade carrying the queen that passed through (South China Morning Post, 19 October 2020). Two demonstrators have since been arrested for attempting to harm the queen, a charge that could lead to life imprisonment (Prachatai, 19 October 2020). Following the incident, the prime minister declared a “severe” state of emergency on 15 October, banning gatherings of more than five people (The Diplomat, 15 October 2020). Consequently, public transportation services were suspended. The police are looking to shut down several media outlets broadcasting the protests, as well as social media pages run by protesters (Bangkok Post, 17 October 2020; Bangkok Post, 19 October 2020). Nonetheless, people continued to demonstrate every day in various cities across the country. The police use of chemically-laced water cannons and tear gas to disperse a peaceful protest on 16 October has been criticized by human rights groups as excessive (Human Rights Watch, 17 October 2020). Prime Minister Prayut has explicitly rejected protesters’ calls for him to resign (Khaosod, 16 October 2020). He also announced that a curfew will be imposed should the situation escalate (Bangkok Post, 16 October 2020).

While demonstrations escalated in Thailand last week, protests against the omnibus law on job creation in Indonesia decreased in relation to the week prior. The proportion of violent demonstrations also decreased significantly. About a quarter of all recorded demonstrations last week turned violent, as compared to nearly half the week prior. The decrease in demonstrations comes amid increased reports of police intercepting people on the way to protest sites (Detik, 14 October 2020; Tribunnews, 13 October 2020). The government has also increased security in the capital, Jakarta, as demonstrations continue. Thousands of police and military officers have been deployed across the city (Jakarta Post, 13 October 2020). Opponents of the omnibus law criticized it for putting business interests before labor and environmental rights. They are calling for the president to revoke the law (Tempo, 15 October 2020). Civil society groups are also disputing the validity of the law, which was passed on 5 October, as they claim that a draft of the law was not submitted to the president within the stipulated deadline (Tempo, 14 October 2020). In support of the protesters’ demands, six governors have urged the president to revoke or review the law (Jakarta Post, 10 October 2020). Notably, hardline Islamic groups, such as the Islamic Defender Front (FPI) and 212 Alumni, also organized protests against the law last week. They demanded that President Joko “Jokowi” Widodo step down (Jakarta Post, 13 October 2020). Meanwhile, the World Bank issued a statement expressing support for the president’s controversial flagship legislation (Antara News, 16 October 2020).

Lastly, in the Philippines, several protests were sparked in opposition to the state’s treatment of an imprisoned activist whose three-month-old child had recently passed away. The activist was separated from her child a month after birth while in prison. The infant passed away two months later before mother and child were able to be reunited. Originally, the activist was granted a furlough of 72 hours to attend her child’s wake and funeral, but this was shortened to six hours. Authorities claimed that the reduction was a preventative measure against the spread of the coronavirus (Rappler, 14 October 2020). The activist was also handcuffed for most of the occasion and closely accompanied by armed police and prison guards who prevented protesters from joining the wake (Manila Bulletin, 16 October 2020). Demonstrators and supporters of the activist condemned authorities’ treatment of the activist as “cruel and inhumane” and called for the release of all political prisoners (Philstar, 15 October 2020).