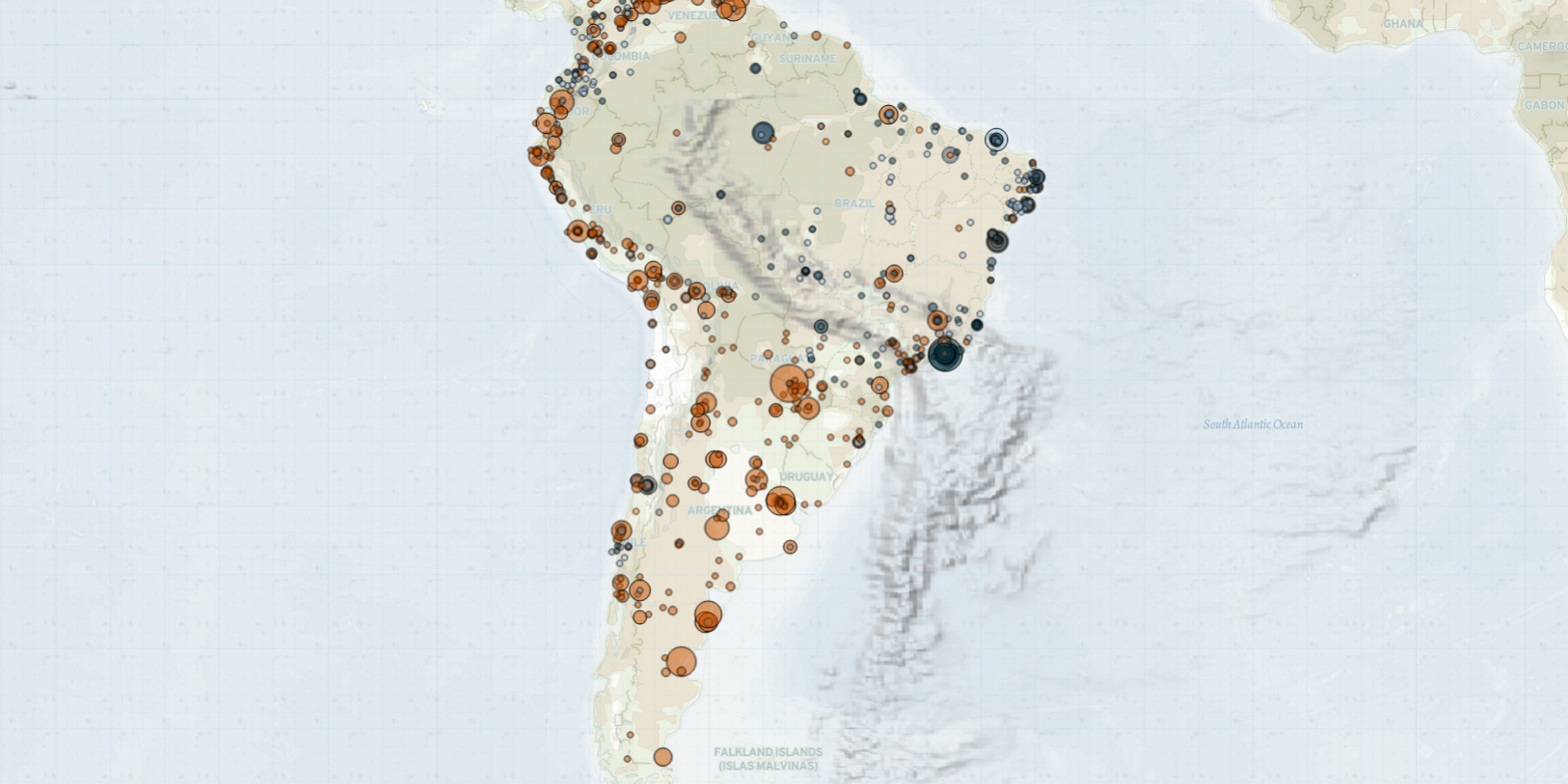 Last week in South America, demonstrations continued to decrease slightly across the region. Demonstrations over labor demands were held in several countries. In Argentina, women protested in support of a bill to legalize abortion. Political tensions increased in Bolivia and Venezuela. In Bolivia, internal disagreements led to clashes among supporters of the Movement for Socialism (MAS) political party, while a controversial national referendum led to attacks against citizens in Venezuela. Violence remains high in the region, with conflicts escalating in Chile, Colombia, and Brazil.

Demonstrations over labor rights were reported in a number of countries. In Peru, unauthorized taxi drivers called for the approval of a law that would allow them to legally work with interprovincial transport. Taxi drivers burned tires on several highways of the country. On 11 December, Congress approved a law that legalizes the services of the collective taxi drivers across provinces, specifically for station wagons (El Comercio, 11 December 2021). These drivers, commonly known as “colectiveros,”, are responsible for most of the transport between provinces, which is essential for the tourism sector in Peru. In Brazil, labor groups continue to carry out demonstrations against the enforcement of social distancing measures to prevent a second wave of coronavirus infections. Business workers, bar and restaurant owners, and event sector workers are trying to negotiate with the municipalities to keep their businesses running. Other groups, such as teachers, bus drivers, and health workers carried out demonstrations to demand the payment of delayed wages. Protests over different labor demands were also reported in Argentina, Colombia, Ecuador, Paraguay and Venezuela.

On 10 December, thousands of women protested in Argentina in support of a bill to legalize abortion (La Nación, 11 December 2020). The bill was approved on 11 December by Congress. The new law, backed by President Alberto Fernandez, allows the termination of a pregnancy up to the fourteenth week. The bill still needs to be approved by the Senate, which is expected to discuss it on 29 December. In 2018, the Senate rejected a similar bill (Estado de Minas, 12 December 2020). In most Latin American countries, reproductive rights are still limited, with abortion only allowed in few exceptional cases (El País, 12 December 2020).

Political tensions increased in Bolivia and Venezuela last week. In Bolivia, clashes were reported between different factions of MAS. In the lead-up to the subnational elections to be held on 7 March 2021, supporters disagreed on the appointment of candidates for mayor and governor in Cochabamba and Potosí departments. Displeased groups claimed the appointment was biased towards candidates favored by the head of MAS and former President Evo Morales (Correo del Sur, 15 December 2020). Local groups demanded that candidates be designated according to elections held within the local ranks of the party.

In Venezuela, opposition parties, led by self-declared interim president Juan Guaidó, held a national referendum to decide whether to accept the results of the National Assembly elections held on 6 December. President Nicolás Maduro’s alliance swept to victory in the boycotted legislative elections, securing 67% of seats in the National Assembly, thus gaining control of the last major branch of government outside his grasp (BBC, 7 December 2020) (for more on this, see ACLED’s recent infographic Social Unrest in the Lead-up to Parliamentary Elections in Venezuela). According to the organizing committee of the national referendum, more than 6.4 million Venezuelans (equivalent to over 31% of the country’s voting population) voted in the referendum (Panorama, 12 December 2020; Diario 2001 Online, 13 December 2020). No results were provided by the organizing committee on how many people voted for or against  the proposals. During the voting, several attacks were perpetrated by Colectivos members and National Bolivarian Police officers against civilians at referendum poll stations in the cities of Caracas, Catia La Mar, Ciudad Ojeda, and Palo Negro.

The Colectivos are pro-government paramilitary groups. These groups came to force in 2006 under the umbrella of the government’s “communal councils”, through which they received state funding and resources, including weapons (Insight Crime, 18 May 2018). They are mostly known for travelling in motorcycles and being active in targeting protesters during anti-government demonstrations.

The number of attacks and armed clashes remained high in the region last week, with conflict escalating in Chile, Colombia, and Brazil. In Chile, indigenous militias carried out several attacks in the Araucanía, Biobio, and Los Lagos regions. The increase in attacks coincides with congressional sessions to decide on the inclusion of seats for indigenous people and other minorities in the drafting of the new Constitution (Austral de Osorno, 9 December 2020). Indigenous people have been demanding more participation in political processes in the country (for more on this, see ACLED’s analysis piece Understanding Indigenous Conflict in Chile).

Meanwhile, in Colombia, at least 11 fatalities were reported from attacks carried out by armed groups against indigenous peoples, social leaders, and members of other vulnerable groups. Attacks happened across different departments, with the most lethal attacks reported in Cauca. In Santander de Quilichao municipality, Cauca, four Nasa indigenous individuals were shot dead by suspected members of the Revolutionary Armed Forces of Colombia (FARC) Dagoberto Ramos dissident faction. In Caloto municipality, Cauca, another Nasa indigenous man was killed by unidentified armed men on the same day, 5 December. On 15 December, the UN High Commissioner for Human Rights Michelle Bachelet issued a statement condemning violence in Colombia. The statement highlights that the Nasa community has been “one of the worst affected indigenous groups,” (OHCHR, 15 December 2020) and called for stronger and more effective action from the authorities to protect these groups.

Clashes between criminal groups for territorial control continue to be reported in Brazil. In Mato Grosso do Sul state, four prisoners and former prisoners were killed over a 10-day period. According to authorities, the attacks might be linked to the First Capital Command (PCC) and the group’s effort to take control of the border with Paraguay. In at least one of these episodes, the killing was part of a territorial dispute between the PCC and the Fahd Jamil, a drug trafficking group present on the border (Midiamax, 10 December 2020). The PCC is the largest and most well-organized Brazilian criminal group, controlling the most important drug trafficking routes in the south of Latin America (Insight Crime, 11 December 2020).

Meanwhile, in Rio de Janeiro state, disputes over territorial control continued between the Red Command (CV) and the Third Pure Command (TCP). In Niterói city, the TCP tried to regain control of areas currently under influence of the CV. Intense shoot-outs continued to be reported for the second consecutive week in the Alma Complex and Jóquei neighborhood in São Gonçalo city, as an ongoing dispute over control of the area continues. At least one gang member was shot dead (O São Gonçalo, 12 December 2020).