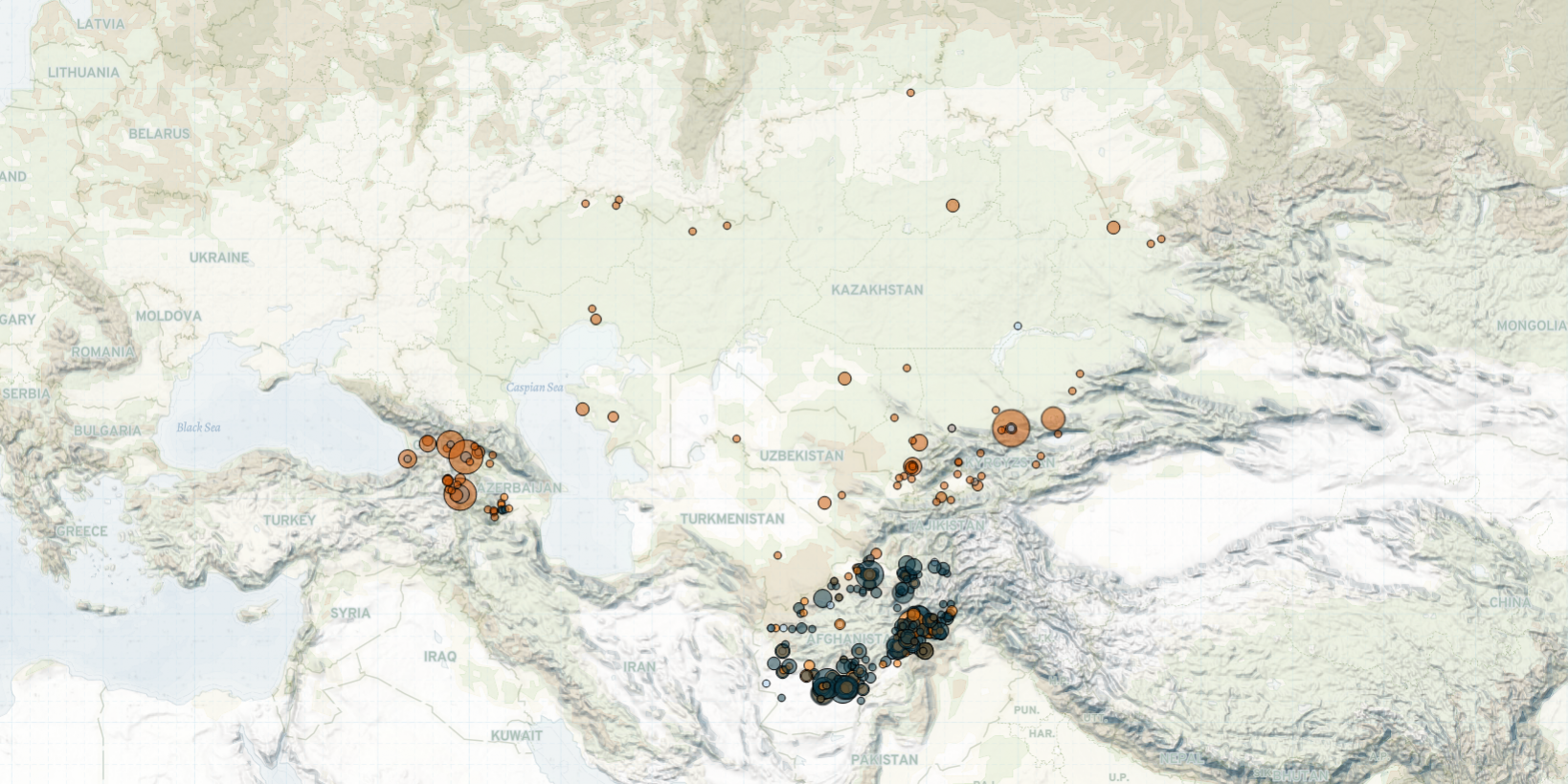 Over the past month in Central Asia and the Caucasus, violence in Afghanistan between the Taliban and Afghan Forces remained steady. The Islamic State (IS) and Al Qaeda also conducted attacks, including targeted killings of civilians at a higher rate. Several clashes took place in the Artsakh (Nagorno-Karabakh) region between Azerbaijani forces and Armenian armed groups. Opposition protests continued in Armenia demanding the resignation of Prime Minister Nikol Pashinyan as cabinet changes and snap elections were discussed in the de facto Artsakh Republic. In Georgia, the post-election crisis continued as the opposition remained critical of the parliamentary elections of October 2020 despite several rounds of negotiations. Legislative elections in Kazakhstan and presidential elections in Kyrgyzstan took place amid harsh criticism by opposition in both countries. The unpaid salaries of some labor groups also sparked demonstrations in Kyrgyzstan. Economic turmoil exacerbated by the coronavirus pandemic led to a rare protest in Turkmenistan.

In Afghanistan, the Taliban continued its offensives all over the country in recent weeks. Besides ongoing assaults in Helmand and Urozgan provinces, the group carried out two insider attacks in Ghazni and Kandahar provinces. They also captured a military base in Kunduz city last week. Meanwhile, ACLED records over 50 air and ground operations by Afghan military forces targeting the Taliban in 13 provinces between 13 December 2020 and 8 January 2021. These were primarily concentrated in southern Helmand and Kandahar provinces, where the Taliban increased its presence in recent weeks. Over 700 militants were reportedly killed in these attacks.

US forces also conducted rare airstrikes in Afghanistan. In an airstrike that the Taliban claimed was carried out by US forces, a former Taliban militant and five of his family members were killed in Bala Buluk district of Farah province. Afghan authorities reject this claim, saying all fatalities were combatants. A separate Afghan military airstrike on 6 January killed at least five people in Lashkargah city, Helmand province. The Taliban claim that such airstrikes violate its peace agreement with the US; the US, meanwhile, accuses the Taliban of being behind targeted killings against civilians (VOA, 4 January 2021).

Attacks targeting civilians have been a prominent trend in Afghanistan in recent weeks, with the number of such events considerably higher in the last quarter of 2020. Many of these attacks remain unclaimed. Last week alone, a women’s rights activist was shot and killed with her brother in Kabul city, a journalist was killed in Ghor’s province capital, and religious scholars were killed by magnetic bombs in Kapisa province. Such assassinations fuel the Afghan government and the Taliban to trade accusations about the perpetrator of the attacks, raising fears about a potential resurgence to the civil war as these killings may disrupt intra-Afghan talks (New York Times, 2 January 2021).

Additionally, the Afghan Ministry of Defense reports that Al Qaeda members, along with Taliban members, were killed in two operations in Nawa-e Barakzayi district of Helmand province on 25 and 26 December. This constitutes another violation of the US-Taliban deal as the Taliban is bound to stop organizations like Al Qaeda from operating on Afghan soil (Middle East Institute, 6 January 2021). Despite this tension, however, intra-Afghan talks restarted in Doha earlier this month. The Afghan government has demanded a ceasefire to curb the violence in the country (AP, 8 January 2021).

Lastly, IS also carried out several significant attacks in Afghanistan in recent weeks. The group fired rockets at the largest US airbase in Afghanistan, Bagram airbase in Parwan Province. Over a dozen civilians, including prison doctors and government employees, were targeted in Kabul city, while a Taliban commander was killed in Kunar.

In the Artsakh (Nagorno-Karabakh) region, following a November 2020 agreement to stop the fighting and allow the deployment of Russian peacekeepers, tensions between Artsakh, Armenia, and Azerbaijan troops continued. Several armed clashes took place in the Kashatagh and Hadrut regions of the de facto Artsakh Republic. On 27 December, the Azerbaijani Ministry of Defence claimed that six Armenian soldiers were killed when an Armenian armed group attacked Azerbaijani soldiers near the Hakaku (Aghdam) village of Hadrut and killed one Azerbaijani serviceman. Both Armenian and Artsakh authorities denied their involvement in the incident, claiming that this village is under Azerbaijani control and located far away from the Line of Contact. However, a few days before this incident on 20 December, another six Armenian soldiers were found hiding in the forests of Hadrut region, signalling that such groups may indeed be engaging in such clashes (ArtsakhPress, 20 December 2020).

Last week, the leaders of Armenia, Azerbaijan, and Russia met in Moscow in their first joint meeting and agreed on opening the regional roads and railways between Armenia and Azerbaijan, which have been out of operation since the early 1990s (Public Radio of Armenia, 11 January 2021). However, Armenia’s prime minister stated that the sides did not come to a consensus about the exchange of war prisoners (Hetq, 11 January 2021). The prisoners’ return was one of the Armenian government’s primary objectives amid growing public dissent. Since 12 December, the relatives and parents of the soldiers who went missing during the war have held at least six protests in Yerevan and Vagharshapat demanding expedited negotiations and the return of the soldiers.

Meanwhile in Armenia, opposition protests demanding Prime Minister Nikol Pashinyan’s resignation continued into a second month. Since 10 November, when a group of people broke into government houses in Yerevan, the opposition has organized over 70 protest events in Yerevan, Gyumri, Vanadzor, and other major settlements in Armenia. On 21 December, a group of people blocked the highway in Syunik province, attempting to prevent Pashinyan’s visit to the region. After this, Pashinyan avoided participating in public events, including the Christmas mass, as the head of the Armenian Apostolic Church also called for the prime minister’s resignation (1Lurer, 8 December 2021). Pashinyan has expressed readiness to meet the opposition block and has mentioned organizing snap elections during 2021. The joint opposition ignored these calls, emphasizing their distrust of the government’s ability to organize fair elections (RFE/RL, 30 December 2020).

In Georgia, the political opposition continued to boycott the new government formed after the parliamentary elections on 31 October, insisting that the results were rigged (Al Jazeera, 1 November 2020). Although several rounds of negotiations took place between the ruling Georgian Dream and opposition parties until 9 December, they did not achieve any results (RFE/RL, 9 December 2020). About a dozen anti-government protest events took place in Tbilisi, Telavi, and Batumi over the past four weeks. In Telavi, activists also reported several attempts to attack a tent set up by protesters.

In Kazakhstan, the ruling Nur Otan party received over 71% of the vote during the parliamentary elections on 10 January 2021, hence keeping the majority of seats (The Diplomat, 11 January 2021).  Many political parties were denied registration due to a number of new administrative barriers and restrictions in the Law on Political Parties (OSCE, 10 January 2021). The most prominent opposition party, the Nationwide Social Democratic Party, boycotted the elections to protest the long-running rule of Nur Otan, claiming that the system was rigged towards the victory of the same political elite (Al Jazeera, 10 January 2021). This pressure led to a large anti-government protest in Almaty city on Kazakhstan’s Independence Day, 16 December. Protesters demand freedom for all political prisoners, fair parliamentary elections, and electoral law reform. Activists also organized protests on the day of the election, but police dispersed all gatherings and detained dozens of protesters.

At the same time, medics, teachers, and other labor groups have organized over ten protest events due to unpaid salaries in Bishkek, Batken, and Aravan cities amid economic hardship brought on by the coronavirus pandemic. Rioters entered the central headquarters of the Trade Union in Bishkek city, taking a top official hostage in her office and entering the president’s office, forcing officials to resign and pay the owed salaries for previous months. In both cases, the rioters left the office of the officials shortly after police arrived.

The economic crisis in the region brought on by the global pandemic also sparked a rare protest in Turkmenistan. On 22 December, dozens of women gathered outside the regional administration building in Mary to bring to the attention of authorities that there is no flour, bread, nor drinking water in their villages.