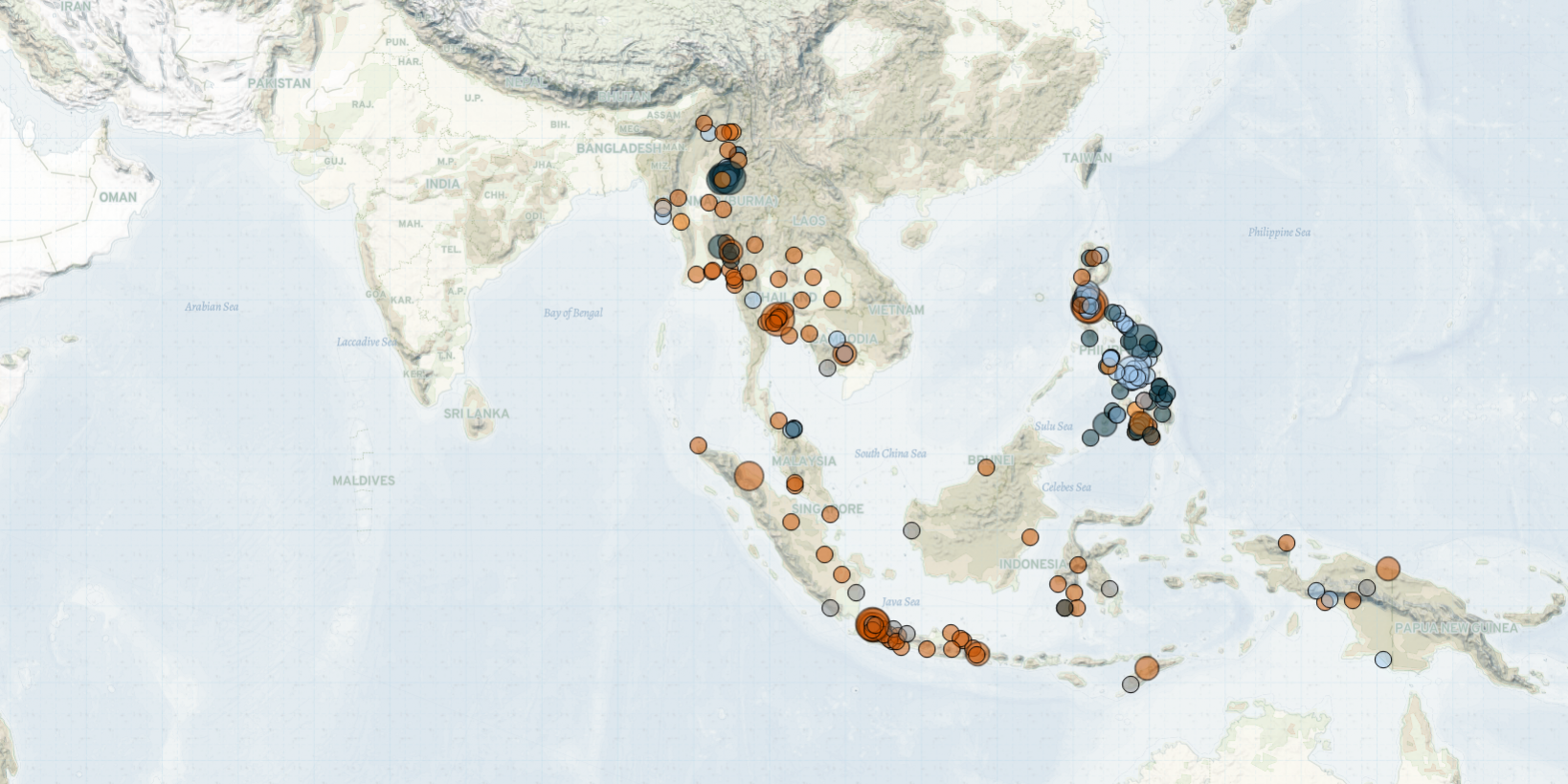 In the past four weeks in Southeast Asia, key developments in the region include intensified fighting between ethnic armed organizations (EAOs) in Shan state, Myanmar, where tensions over territorial disputes were reignited in early December. Also in Myanmar, fighting between Karen rebels and state forces in Kayin state and Bago region sparked mass demonstrations calling for the Myanmar military’s withdrawal from rebel-controlled areas. In Thailand, demonstration activity was muted as the anti-government movement took a year-end break that coincided with the second wave of coronavirus infections in the country. Meanwhile, demonstrations in Indonesia were focused on calling for the release of the leader of the hardline Islamic Defenders Front (FPI). Finally, in the Philippines, clashes between state forces and communist rebels increased in the absence of a customary Christmas ceasefire. Meanwhile, violence carried out by Islamist militants over a land dispute was also reported.

In Myanmar, fighting between the Palaung State Liberation Front/Ta’ang National Liberation Army (PSLF/TNLA) and the Restoration Council of Shan State/Shan State Army-South (RCSS/SSA-S) continued to intensify in northern Shan State. Townships where clashes between the two groups were reported include Kyaukme, Namtu, Hsipaw, and Kutkai. The clashes have taken place almost daily since the end of December. Last week, the RCSS/SSA-S occupied several temporary PSLF/TNLA bases in Kyaukme township (Eleven Media Group, 7 January 2021). Military tensions between the PSLF/TNLA and the RCSS/SSA-S were reignited in early December 2020 over an ongoing territorial dispute. The northern-Shan-based PSLF/TNLA claims that the southern-based RCSS/SSA-S has expanded its territory into the north since the latter signed the Nationwide Ceasefire Agreement (NCA) with the government in 2015. This claim is disputed by the RCSS/SSA-S (Network Media Group, 8 December 2020). Amid the standoff between the two EAOs, civilian casualties – including at least one fatality – have been reported (Shan Herald Agency for News, 4 January 2021). Meanwhile, many more homes have been damaged (Shan Herald Agency for News, 8 January 2021). The unrest has displaced thousands of villagers since late December (Irrawaddy, 6 January 2021). Civil society organizations and members of parliament are urging the warring groups to engage in peace talks so that IDPs may return home (Eleven Media Group, 5 January 2021).

Meanwhile, fighting between the Myanmar military and the Karen National Union/Karen National Liberation Army (KNU/KNLA) was reported in Kayin state and Bago region after state forces increased their troop presence in Hpapun township, which is partly controlled by the KNU/KNLA. The increased presence of state forces comes after the KNU/KNLA issued a statement calling for the military to remove its bases in KNU/KNLA-controlled areas by the end of 2020 (Eleven Media Group, 2 December 2020). Clashes between the two groups have forced more than 3,000 villagers to flee their homes in December alone (Myanmar Now, 7 January 2021). The instability stemming from the increased military presence in the area has also sparked dissatisfaction among local residents. On 30 December, more than 10,000 local Kayin people marched in Hpapun township to call on the military to withdraw its bases (Radio Free Asia, 31 December 2020). A similar mass demonstration with more than 1,000 participants was held a week later (Myanmar Now, 7 January 2021).

In Thailand, following the announcement of anti-government protest leaders that the movement would take a year-end break, demonstration activity decreased significantly in the country (Reuters, 14 December 2020). This pause in activity coincides with a spike in coronavirus infections, which in turn have prompted authorities to impose strict restrictions on movement, including the lockdown of several provinces and a nationwide ban on gatherings (Nikkei Asia, 3 January 2021; Bangkok Post, 30 December 2020). Meanwhile, authorities have continued to file lèse majesté charges against anti-government protesters, with yet another group of activists responding to a police summons on 7 January. Since November of last year, at least 39 people have been charged with royal defamation (Channel News Asia, 7 January 2021).

In Indonesia, the arrest of the controversial leader of the FPI, Muhammad Rizieq Shihab, on 13 December sparked demonstrations across the country. The cleric was arrested for allegedly contravening social restrictions to curb the coronavirus when he hosted several large gatherings at his home and the FPI headquarters in November of last year (Antara News, 13 December 2020). Rizieq’s supporters, who include members of the FPI as well as those of other Muslim organizations, called for his release alongside demands for an investigation into the death of six FPI members on 7 December. According to authorities, the six FPI members had been en route to disrupt the questioning of the FPI leader by the police when police intercepted them. However, this account has been disputed by the FPI, who assert that an unidentified armed group shot at the FPI members who were going to a religious family gathering (Jakarta Post, 8 December 2020). The number of demonstration events reached a peak on 18 December, when Rizieq’s supporters gathered for what they called the 1812 demonstration (Aksi 1812). Police reportedly arrested 455 people in relation to Aksi 1812, including at least five people who were carrying sharp weapons (Detik, 19 December 2020).

Meanwhile, in Papua province, Indonesia, the West Papua National Liberation Army (TPNPB) shot at a plane belonging to the Christian humanitarian organization Mission Aviation Fellowship (MAF). They also shot at a helicopter belonging to the mining company Freeport Indonesia, of which the Indonesian government is a majority stakeholder (Benar News, 7 January 2021). In both incidents, the pilots were foreign citizens and no casualties were reported. Following the attacks, the rebel group stated that the shootings were in line with their earlier promise to shoot at civilian aircraft that transport state forces (Jubi, 9 January 2021). The rebels assert that MAF aircraft “regularly transport military and police personnel as well as military logistical supplies including food” (Benar News, 7 January 2021). However, the MAF denies this claim (Benar News, 7 January 2021).

Lastly, in the Philippines, there was a notable increase in fighting between state forces and the communist New People’s Army (NPA) around Christmas time. ACLED records at least 13 clashes between the two groups from 21 to 30 December. The increase in battles comes on the heels of announcements by both President Rodrigo Duterte and the Communist Party of the Philippines (CPP) that they would not declare their almost-customary Christmas ceasefires in 2020 (Manila Times, 8 December 2020; Philstar, 16 December 2020). Amid the worsening relations between the rebel group and the government, the president also declared that peace talks with the National Democratic Front (NDF) — the political arm of the CPP — were “dead” (Philippine Daily Inquirer, 8 December 2020). Notably, on 25 December, the military launched a deadly airstrike against the NPA in Sultan Kudarat province where some 200 NPA members were gathered to celebrate the CPP’s 52nd anniversary the next day (Philstar, 25 December 2020).

Meanwhile, fighting also continued on the Islamist front in the Philippines. Clashes primarily took place in Maguindanao province, where the Bangsamoro Islamic Freedom Fighters (BIFF) clashed with state forces. As a result of the ongoing tensions, more than 6,000 people in Maguindanao have been displaced since December (Philippine Daily Inquirer, 7 January 2021). The BIFF has also reportedly been obstructing the delivery of relief goods into affected villages. On 31 December, the armed group launched an ambush on a convoy of aid workers in South Upi town, killing one of them. The town mayor was also part of the convoy. In response to the ambush, state forces fired back at the militants along with air support.