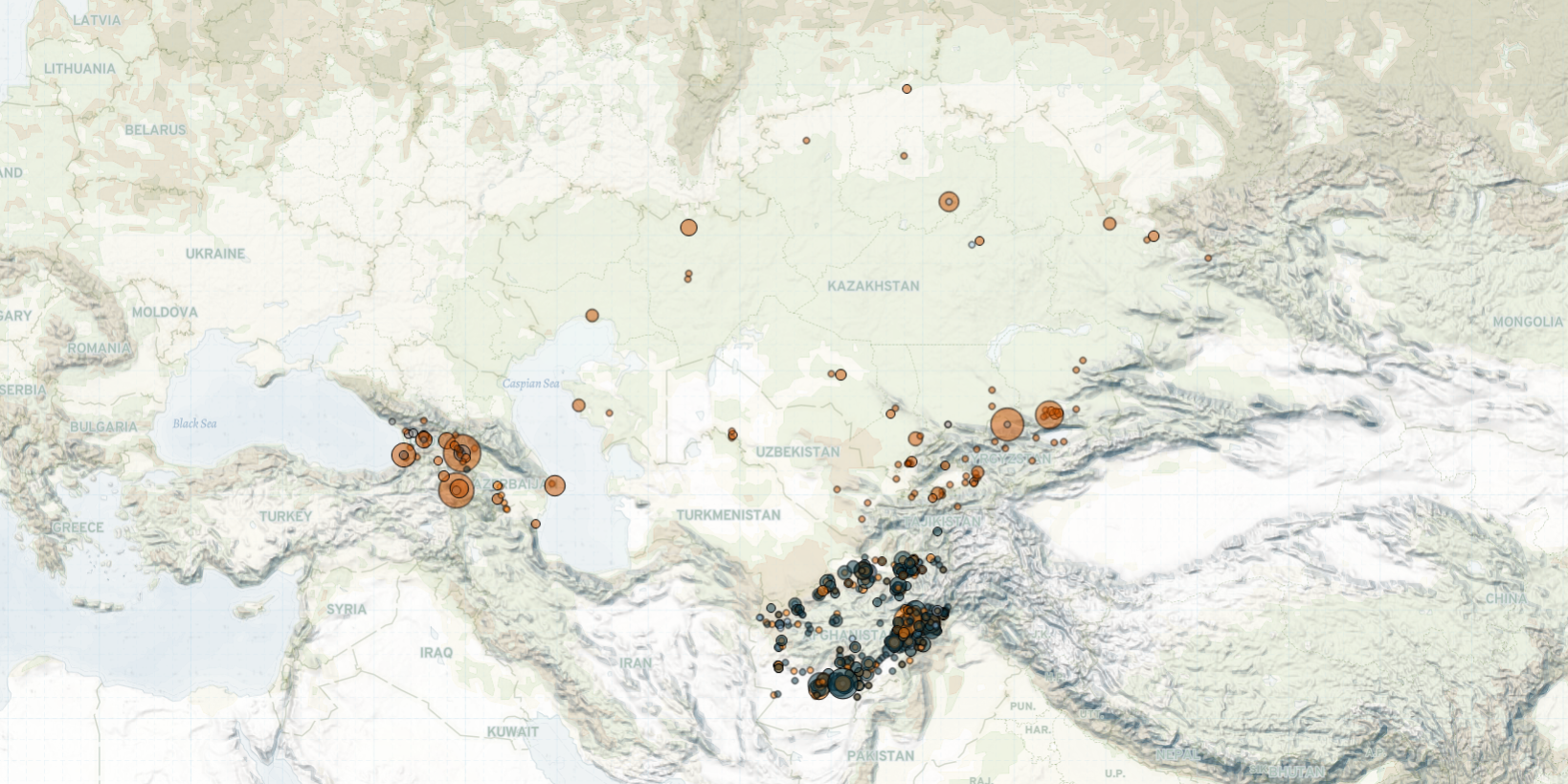 Last week in Central Asia and the Caucasus, violence continued between the Taliban and Afghan forces, as well as the targeted killing of civilians. There were new developments in the intra-Afghan talks and US troops’ withdrawal from Afghanistan. In the de facto Republic of Artsakh, remnant landmines continue to inflict civilian casualties. Meanwhile, anti-government protests spiked in Armenia. In Georgia, the arrest of a prominent opposition leader continued to fuel opposition protests. Meanwhile, in Kazakhstan, the persecution of ethnic and religious minorities in the Xinjiang region of China continues to ignite discontent among ethnic Kazakhs. In Turkmenistan, massive detentions took place as many were accused of treason for watching opposition videos.

In Afghanistan,1ACLED is currently conducting a review of sourcing and reporting of the conflict in Afghanistan since 2020. violence continues across 31 of the country’s 34 provinces. Afghan forces and the Taliban clashed primarily in Kandahar, Nangarhar, and Helmand provinces. Arghandab district of Kandahar was the district home to the most activity last week, continuing trends seen throughout the month of February when it was home to the most airstrikes by Afghan forces. The Taliban also killed ten Afghan security personnel in Arghandab when a suicide bomber drove into a military base, after which clashes ensued. Afghan forces made minor territorial gains in the Gultapa district of Kunduz province as well as some areas along the Kandahar-Helmand highway. The use of remote violence continues to remain high. The Taliban conducted the majority of roadside bomb and landmine attacks targeting Afghan forces last week in several provinces, while the Islamic State killed a police colonel with an IED in Kabul city.

Meanwhile, targeted civilian killings in the country continue. Government workers, aid workers, tribal leaders, and teachers were shot dead in different provinces by unidentified groups last week. In addition, three civilians — family members of a journalist — were killed in their home by unknown gunmen in Chaghcharan city of Ghor province. The journalist himself had been assassinated on 1 January 2021.

In a separate development, intra-Afghan talks resumed between the Taliban and the Afghan government last week, nearly a month after they were halted (RFE/RL, 23 February 2021). As the Biden administration is still to decide about the status of US troops in Afghanistan, the continuity of the intra-Afghan talks remains even more critical (Afghanistan Analysts Network, 25 February 2021). Because of the ongoing violence, rise in targeted killings of civilians, and suspicions of the Taliban’s commitment to the deal, the US is currently facing a difficult choice. Last week, to mark the first anniversary of the US-Taliban deal on 28 February 2020, the Taliban renewed its demand for US and NATO forces to withdraw from Afghanistan by 1 May 2021 (Voice of Jihad, 28 February 2021). Meanwhile, a member of the Taliban’s negotiating team warned of “unprecedented” war should the foreign forces remain in the country (Afghanistan Times, 28 February 2021).

Along the Armenia-Artsakh-Azerbaijan Lines of Contact, remnant landmines resulted in casualties last week, as in prior weeks. Last week, two landmine blasts injured Azerbaijani civilians in Tartar and Jabrayil regions in the Azerbaijani-controlled part of the de facto Artsakh Republic. According to the Azerbaijani government, most civilian victims of the landmines are Azerbaijani IDPs trying to return to the recently regained territory in and around Nagorno-Karabakh (RFE/RL, 18 February 2021).

In Armenia, demonstrations organized by the opposition alliance Homeland Salvation Movement resumed in Yerevan, calling for the resignation of Prime Minister Nikol Pashinyan. The protests began after signing the agreement to end the war in the de facto Artsakh Republic on 9 November 2020. The largest protest last week took place on 20 February, drawing about 12,000 participants, followed by other opposition rallies throughout the week, with some of them resulting in clashes and arrests (RFE/RL, 23 February 2021). On 25 February, both Pashinyan’s party, My Step Alliance, and the Homeland Salvation movement organized demonstrations in Yerevan. Meanwhile, Armenia’s political crisis escalated further. Pashinyan accused the armed forces of a military coup attempt amid the army general staff’s statement criticizing his handling of the Azerbaijan-Armenia conflict (Al Jazeera, 25 February 2021). Overall, the situation in Armenia remains tense with the current deadlock, and demonstrations are likely to continue in the coming weeks.

In Georgia, opposition demonstrations continue as the United National Movement leader (UNM), Nika Melia, was arrested on 23 February in a special operation in Tbilisi last week. Melia’s supporters clashed with the police outside UNM headquarters, attempting to prevent the arrest; at least 20 people were detained. Large opposition rallies were held in Tbilisi, with some smaller ones across the country last week demanding Melia’s release and snap parliamentary elections. Melia is accused of inciting mass unrest during anti-government protests in June 2019, and the opposition sees his case as politically motivated (RFE/RL, 17 February 2021).

In Kazakhstan, relatives of ethnic Kazakhs from China’s northwestern Xinjiang region continued demonstrating for the third week in a row in front of the Chinese consulate in Almaty city. Demonstrators reiterated claims about the repressive policies toward ethnic and religious groups in China detained in the network of facilities officially known as reeducation camps. They also demand the release of their detained relatives; however, neither the Chinese nor the Kazakh government has expressed the will to meet the protesters’ demands (RFE/RL, 22 February 2021).

In Turkmenistan, about 180 citizens were detained over the past week in Lebap Region, including Turkmenabat city, for watching videos of the opposition. The detainees were accused of high treason for clicking the “like” button on YouTube under the videos of Murad Kurbanov, the leader of the opposition movement Democratic Choice for Turkmenistan, founded in 2020. Despite constant suppression of dissent in Turkmenistan, political activity of the Turkmen opposition, particularly those living outside the country, has been on the rise during 2020. Food shortages and price hikes exacerbated by the COVID-19 pandemic led to a spike in protests throughout the past year (RFE/RL, 3 November 2020; Fergana, 9 June 2020). (For further information about demonstration drivers in Central Asia, see ACLED’s joint piece with Oxus Society for Central Asian Affairs, Understanding Disorder in Central Asia).