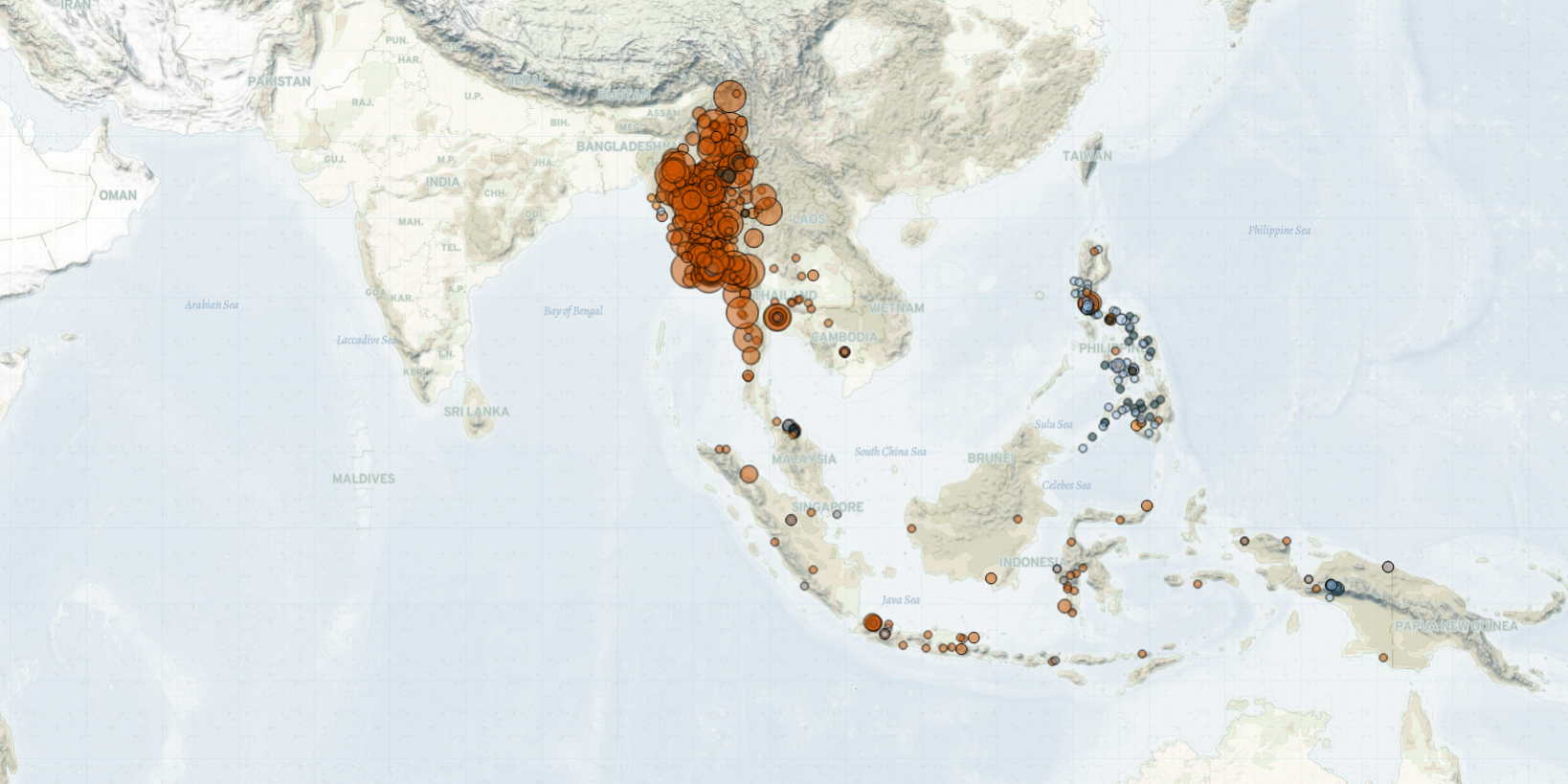 Last week in Southeast Asia, demonstrations against the military coup in Myanmar continued amid increased use of force by government authorities against demonstrators. Two demonstrators were killed when police fired into a crowd of demonstrators. Mass demonstrations were also held across the country as part of a “22222 Uprising” campaign on 22 February. Meanwhile, fresh clashes between Kachin rebels and state forces broke out in northern Shan state, Myanmar. In Thailand, an increase in anti-government protests was recorded amid an improvement in the coronavirus situation in the country. There was also an uptick in protests calling for Papuan independence in Indonesia amid government proposals to create a third province in West Papua. Lastly, in the Philippines, a bungled anti-drug operation resulted in an inadvertent yet deadly clash between police and Drug Enforcement Agency officers.

In Myanmar, tensions between demonstrators and security forces escalated as mass demonstrations against the military coup continued for the third week. In Myanmar’s second largest city, Mandalay, a fierce standoff between police and demonstrators at a shipyard on 20 February prompted police to fire live ammunition and rubber bullets to disperse demonstrators, resulting in the deaths of two men (Straits Times, 20 February 2021). This came a day after a young woman who had been shot in the head during a 9 February protest in Nay Pyi Taw was removed from life support. It also marks the deadliest day of demonstrations up to that day. On 3 March, a total of 38 people were killed, marking the deadliest day of demonstrations thus far (Channel News Asia, 4 March 2021); these events will be included in next week’s ACLED data publication.

Undeterred by the deadly confrontations over the weekend, citizens held a nationwide “22222 Uprising” campaign on 22 February — which has five 2’s in its date (22/02/2021) — as a nod towards the popular “8888” uprising on 8 August 1988. Millions of citizens across Myanmar reportedly took to the streets, intensifying their opposition to the takeover of power by the military (Irrawaddy, 22 February 2021). While the day of large scale demonstrations largely ended peacefully, security forces launched a mass arrest operation in Nay Pyi Taw and detained nearly 200 protesters — marking the highest number of arrests made in a single day (Eleven Media Group, 24 February 2021). Meanwhile, the State Administration Council appointed new committees to select wards and village administrators, prompting further demonstrations by residents against these appointments (DVB, 24 February 2021). Demonstrators remain defiant in the face of tougher crackdown by security forces, as police continue to use tear gas, live ammunition, rubber bullets, stun grenades, and water cannons to disperse demonstrators.

Meanwhile, there was a spike in battles in northern Shan state as heavy fighting between the Myanmar military and Kachin Independence Organization/Kachin Independence Army (KIO/KIA) broke out, resulting in at least two civilian fatalities. The fresh clashes between the two sides come amid the increased use of force by state forces against citizens opposing the coup in Kachin state. In Myitkyina city, the capital of Kachin state, security forces have deployed armored vehicles and fired shots to disperse protesters (Channel News Asia, 15 February 2021). Previously, the KIO/KIA had stated that it would “stand with the people” if state forces attacked those opposing its rule in Kachin state, and that “violence against the people [would not] be tolerated” (Kachin News Group, 11 February 2021).

Elsewhere, the new military-appointed Union Election Commission (UEC) convened its first coordination meeting on 26 February in its bid to reform the electoral system into a proportional representation system (Eleven Media Group, 2 March 2021). Widely seen by the public as an indication of political alignment with the military, larger political parties such as the National League for Democracy and Shan Nationalities League declined to attend the meeting to avoid legitimizing the new UEC. Representatives from 53 out of 91 registered political parties were present at the meeting, nonetheless, including the military-backed Union Solidarity and Development and the hardline Rakhine-based Arakan National Party (ANP). It is noteworthy that amid the nationwide wave of mass demonstrations, no large scale protests have been reported in the northern part of Rakhine state, which was an ANP stronghold in the 2015 and 2020 general elections (RFA, 24 February 2021; Myanmar Now, 10 November 2020).

In another extraordinary turn of events during the week, the Permanent Representative of Myanmar to the United Nations publicly denounced the Myanmar military at a General Assembly meeting, stating that he represents the democratically elected government. Concluding his remarks in Burmese, he stated that “the revolution must succeed” before raising the three-finger salute (Irrawaddy, 27 February 2021; UN, 26 February 2021), a gesture popularized by the pro-democracy movement in Thailand and Myanmar. His unprecedented act marks the first time a United Nations ambassador has condemned their country’s authorities (Irrawaddy, 27 February 2021). With him and the military junta both claiming to represent Myanmar, member states of the United Nations will likely have to decide which ambassador to recognize (VOA, 3 March 2021).

In Indonesia, there was an uptick in protests against the government’s proposal to carve out a third province in West Papua, the Central Papua province. The plan comes amid government plans to renew the special autonomy status of West Papua, which is due to expire at the end of this year. According to the government, the creation of a third province will contribute to the development of West Papua (Jubi, 8 February 2021). However, protesters assert that the creation of a new province would further divide Papuans and is against the will of the Papuans themselves. Thousands of people marched in Dogiyai Regency to oppose the plan and to reiterate their demands for a referendum on independence (HumanRightsPapua, 22 February 2021).

Finally, in the Philippines, anti-drug violence decreased sharply after a particularly deadly preceding week. However, it was still within the context of the drug war that a highly unusual event took place last week: a bungled buy-bust operation that resulted in a shootout between police and the Philippine Drug Enforcement Agency (PDEA). The clash seems to have sprung from poor coordination between the police and PDEA (Philippine Daily Inquirer, 24 February 2021). Both parties are supposed to always coordinate on drug-related operations, even if only one of the two is actually carrying out the raid itself. Nonetheless, both the police and PDEA insist that they properly coordinated the bungled operation, although many things remain unclear. The clash, which authorities have labeled a “misencounter” (GMA Network, 25 February 2021), resulted in several casualties including the deaths of two police officers, a PDEA agent, and a PDEA informant.

Relatedly, last week, the Philippine government also made an unexpected admission of the police force’s significant shortcomings in their operations related to the war on drugs. During a presentation at a high-level meeting of the United Nations Human Rights Council that surprised many, the Department of Justice (DOJ) admitted that police did not adhere to protocol in “more than half” of thousands of anti-drug operations that were reviewed (Rappler, 24 February 2021). In particular, the DOJ’s review of cases where drug suspects allegedly resisted arrest — a common allegation used by authorities to justify the killings of suspects —  revealed that “no full examination of the weapon recovered was conducted,” nor was a “verification of its ownership… undertaken” (Rappler, 24 February 2021). The revelation by the DOJ has prompted many opposition groups, as well as local and international human rights organizations, to step up their calls for the government to stop its war on drugs (Rappler, 24 February 2021; Human Rights Watch, 25 February 2021).