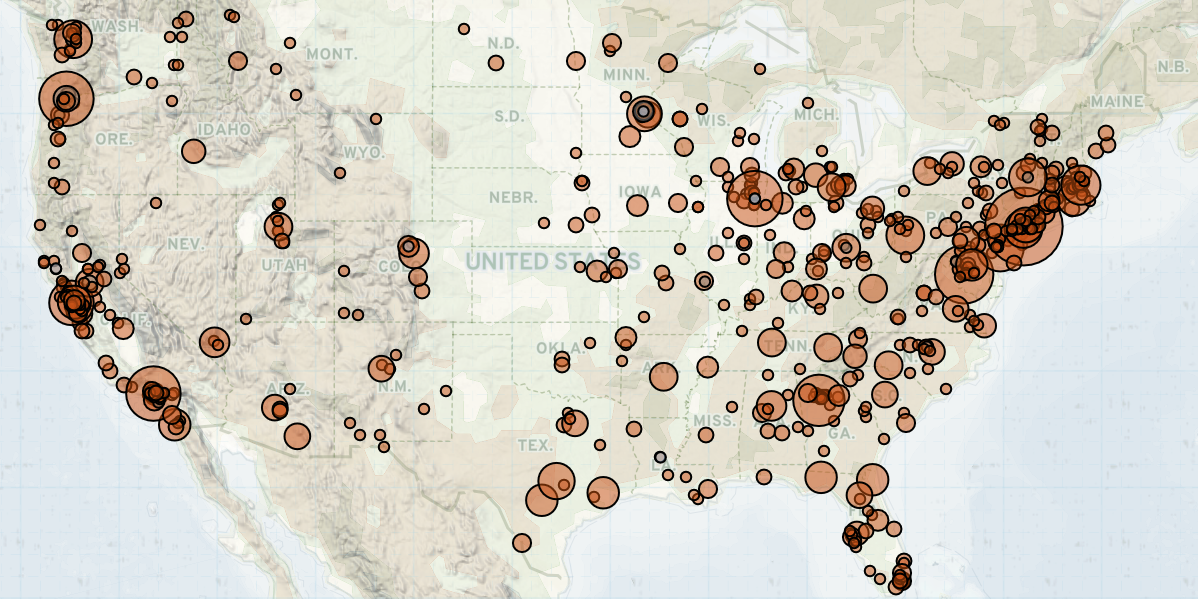 Demonstrations in the United States surged last week, increasing by about 40% compared to the week prior. The increase was primarily driven by demonstrations around the police killing of Daunte Wright, a 20-year-old Black man, and secondarily by the release of body camera footage showing the police killing of Adam Toledo, a 13-year-old Latino boy. As a result, demonstrations associated with the Black Lives Matter (BLM) movement more than quadrupled last week, accounting for over a third of all demonstrations recorded during the week. While hate crimes against Asian Americans continued, demonstrations against the attacks trended downward for the third consecutive week. Additionally, the number of demonstrations connected to the pandemic rose slightly last week as new COVID-19 cases increased in nearly half of all states (CNN, 17 April 20, 2021).

Demonstrations associated with the BLM movement spiked last week following the fatal police shooting of Daunte Wright. In Brooklyn Center, a suburb of Minneapolis, Minnesota, police officers pulled Wright over for an expired tag on 11 April. After the officers learned he had an outstanding warrant, they tried to handcuff him while he was standing outside his car. As Wright attempted to reenter the car, one of the officers pulled out her handgun and shot him, reportedly believing she had instead been holding her taser. Wright drove away from the scene but was fatally injured by the gunshot and died following a minor car crash (New York Times, 15 April 2021).

A large crowd of demonstrators immediately gathered around the Brooklyn Center police department, demanding justice for Wright. The demonstration turned violent in the evening when people threw rocks and other objects at the police department as officers pushed the crowd across the street and shot rubber bullets, flash-bang grenades, and tear gas (Associated Press, 11 April 2021). Approximately 20 businesses were reportedly looted that night (Pioneer Press, 12 April 2021).

Demonstrations associated with the BLM movement following Wright’s killing were reported in at least 34 states and Washington, DC. Over 85% of all BLM-related demonstrations took heed of President Joe Biden’s call for calm and peaceful protests the day following Wright’s killing (USA Today, 12 April 2021). However, violent or destructive demonstrations were recorded in eight states and Washington, DC. Most reported violence was directed at police. Looting was only reported in Brooklyn Center, although a mix of damage to buildings, graffiti, and egging was reported in different events.

A secondary driver behind the increase in demonstrations associated with the BLM movement was the release of body camera footage on 15 April showing the 29 March killing of 13-year-old Adam Toledo, a Latino boy, in Chicago, Illinois. The footage shows police shooting Toledo as he turns unarmed with both hands in the air, reportedly after throwing a gun behind a nearby fence (Chicago Tribune, 15 April 2021). The footage contradicts the initial police report that labeled the incident as an “armed confrontation” (BBC News, 2 April 2021). Demonstrations calling for justice for Toledo frequently occurred alongside BLM demonstrations, but several were independent of the movement. Additionally, these demonstrations were less geographically dispersed than those in support of Wright, with events reported in six states and Washington, DC.

Demonstrations related to the coronavirus pandemic continued at a slightly elevated level last week as new COVID-19 cases increased in the US, with at least 21 states recording a 10%-or-greater rise in daily average positive cases (CNN, 17 April 2021). Nevertheless, demonstrations calling for reopening businesses and schools doubled last week, albeit at lower levels than in March. More than half of all demonstrations against coronavirus restrictions last week were focused on mask mandates. For more on the pandemic’s impact on protest trends, see ACLED’s report: A National Emergency: How COVID-19 Is Fueling Unrest in the US.

White nationalists also planned a series of ‘White Lives Matter’ demonstrations across the US last week, though these events largely failed to materialize (NBC News, 11 April 2021). Almost a dozen events garnered crowds, but in at least three instances the only people present were counter-demonstrators. In seven other cases, the ‘White Lives Matter’ crowd consisted of a small group of fewer than 20 people, including several with fewer than five participants. Only in Huntington Beach, California did a sizable crowd of ‘White Lives Matter’ demonstrators appear, including members of the Proud Boys, the KKK, and neo-Nazi groups (LA Times, 11 April 2021). Their numbers, however, were dwarfed by counter-protesters associated with the BLM movement (Forbes, 11 April 2021).

Myung-Gyun Lim is a US Assistant Research Manager at ACLED. He holds a Master’s degree in Political Science from Georgia State University. His research interest centers on threat inflation and military intervention. He speaks English, Korean, and basic Mandarin.
21 April 2021
Share
TweetShare on Twitter Share on FacebookShare on Facebook Share on LinkedInShare on LinkedIn

Myung-Gyun Lim is a US Assistant Research Manager at ACLED. He holds a Master’s degree in Political Science from Georgia State University. His research interest centers on threat inflation and military intervention. He speaks English, Korean, and basic Mandarin.