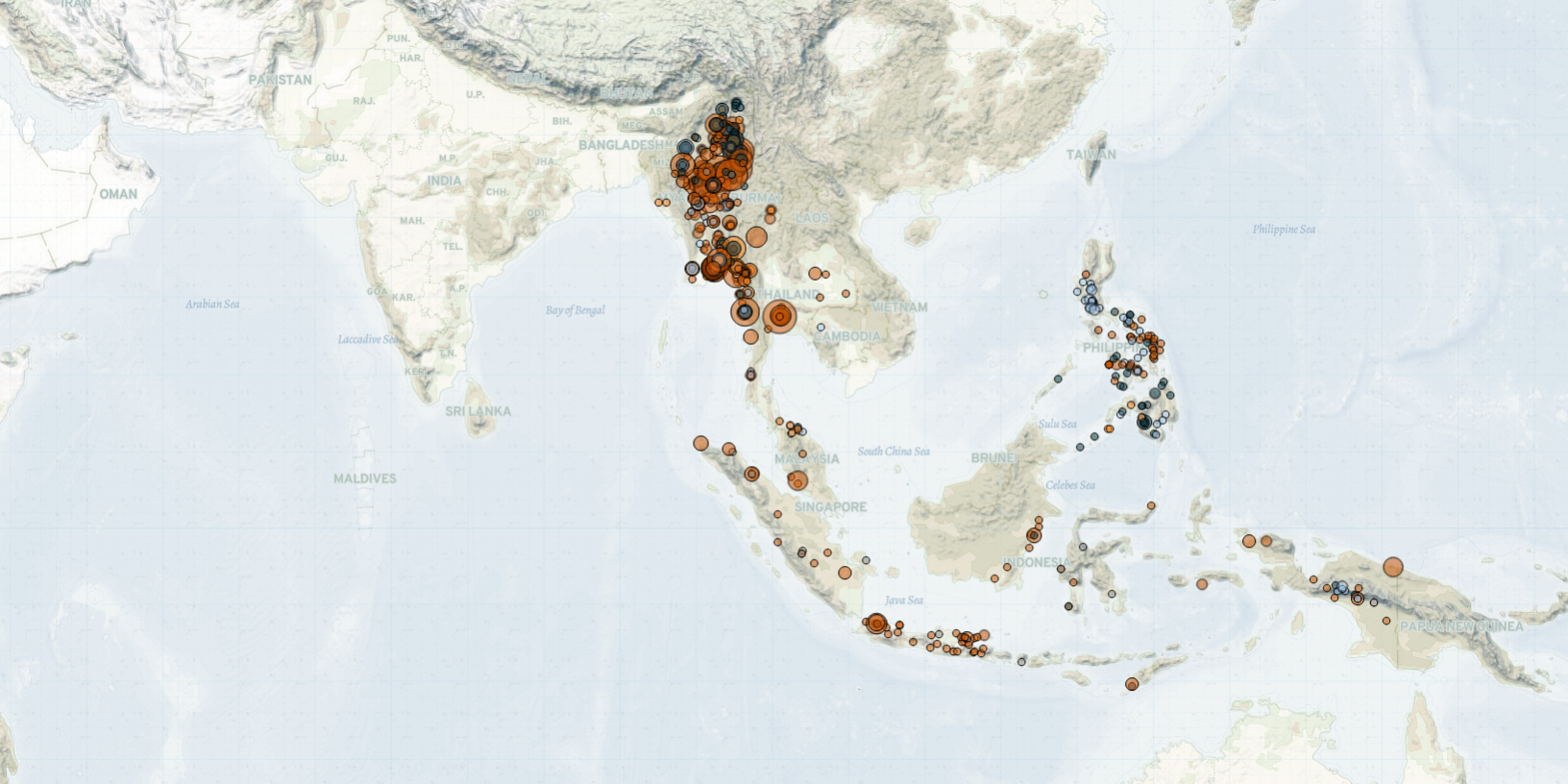 Last week in Southeast Asia, anti-coup demonstrators in Myanmar boycotted celebrations of the national Thingyan holiday, which marks the Burmese new year, in honor of those who had been killed by security forces since the 1 February coup. Demonstrations also decreased as demonstrators took up more symbolic forms of protest to evade violent crackdowns by security forces. Meanwhile, fighting between ethnic armed organizations (EAOs) and the Myanmar military increased in Kachin and Shan states. In Sagaing region, armed anti-coup demonstrators joined forces with a small EAO to carry out a deadly ambush on military trucks. Meanwhile, in the Philippines, tensions with China remain high as Philippine authorities detected more Chinese vessels in the Philippines’ Exclusive Economic Zone (EEZ). Elsewhere, separatist violence increased in Thailand and Indonesia. Finally, anti-government demonstrators in Thailand continue to call for the release of detained protest leaders who have been on a hunger strike.

In Myanmar, anti-coup demonstrations continue despite the lower turnouts at demonstrations over the past few weeks due to violent crackdowns by security forces. Over the Thingyan holiday, which is the largest national holiday in Myanmar, anti-coup supporters called for a boycott of any form of celebration to honor those who had been killed by security forces since the 1 February coup (Irrawaddy, 6 April 2021). Instead, activists and anti-coup supporters launched a five-day campaign over the holiday to keep up the momentum of the anti-coup movement (Channel News Asia, 13 April 2021). As part of the campaign, anti-coup supporters protested in a variety of symbolic ways, such as by painting traditional flower pots with pro-democracy slogans and splashing red paint on the street to signify the blood shed by those killed by the military during the anti-coup movement.

Meanwhile, the Sagaing region continues to be a flashpoint between security forces and demonstrators. On 10 April, in Tamu town, near the Indian border, an operation launched by security forces to tear down barricades set up by residents turned violent when security forces used heavy weapons, including grenade launchers, against demonstrators. In turn, the demonstrators tried to fight back with homemade bombs and hunting rifles. Additionally, the Kuki National Organization/Kuki National Army (KNO/KNA) reported that its troops joined demonstrators to ambush a convoy of military trucks, killing several soldiers (Irrawaddy, 11 April 2021). Following the deadly clashes, security forces continued their operations in the town over the next few days, which resulted in several more civilian deaths and forced many residents to flee to India (Myanmar Now, 14 April 2021).

Separately, the Brotherhood Alliance launched an attack against the military junta’s security forces last week by attacking a police station in northern Shan state (Myanmar Now, 10 April 2021; Irrawaddy, 10 April 2021). Several police officers were killed during the incident. The alliance of three EAOs includes the Myanmar National Truth and Justice Party/Myanmar National Democratic Alliance Army (MNTJP/MNDAA), the Palaung State Liberation Front/Ta’ang National Liberation Army (PSLF/TNLA), and the United League of Arakan/Arakan Army (ULA/AA). This is the first assault by the alliance after it issued a statement on 30 March pledging to defend anti-coup demonstrators if the military junta does not stop killing civilians (Mizzima, 31 March 2021).

Additionally, the Committee Representing Pyidaungsu Hluttaw — a body representing lawmakers ousted by the coup — announced the formation of an interim National Unity Government (NUG), which comprises 11 ministries and 26 lawmakers. The NUG is seeking to position itself as the legitimate government of Myanmar; the announcement has been met with much fanfare from the public (Reuters, 17 April 2021). A minister from the newly formed cabinet claims that several countries are making preparations to recognize the NUG as the rightful government of Myanmar (Myanmar Now, 16 April 2021).

Elsewhere, separatist violence increased in Indonesia and Thailand. In Papua province, Indonesia, Papuan separatists carried out several arson attacks and also opened fire at state forces and civilians. At least two civilians were killed last week, while dozens more fled their homes in light of increasing instability in the region (Indonesia Tribune, 13 April 2021). Similarly, in Thailand’s deep south, there was a surge in activity by Malay-Muslim separatists as the month of Ramadan began. On top of attacks against security forces, several incidents of arson were also recorded across Pattani and Songkhla provinces. In recent years, there has generally been a spike in separatist violence in Thailand’s Muslim-majority deep south around Ramadan.

Lastly, also in Thailand, anti-government protesters continue to take to the streets. The majority of anti-government demonstrations last week consisted of ‘standing protests’ where protesters stood still, well apart from each other, while holding up placards to reiterate their demand for the release of detained protest leaders. These protests have been held in Bangkok almost daily for nearly a month. Last week, similar protests were also recorded in several other provinces. The spread of these protests outside of the capital city comes as reports emerged about the deteriorating health of two detained protest leaders who have been on hunger strikes (The Nation, 17 April 2021). Meanwhile, an increasing number of activists and anti-government protesters have been joining in the hunger strike in solidarity with the two detained protest leaders (Prachatai, 15 April 2021).