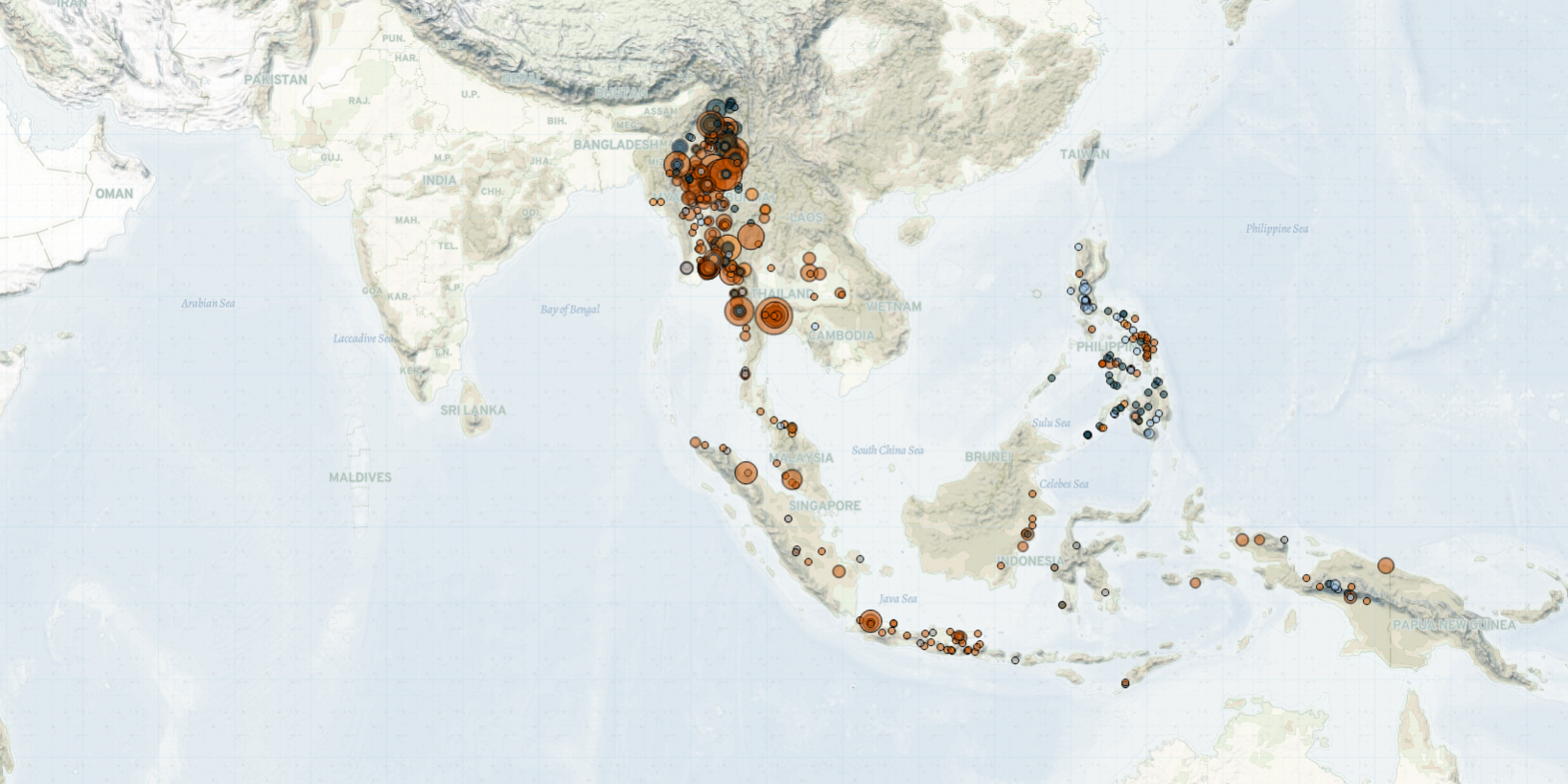 Last week in Southeast Asia, anti-coup demonstrations continued in Myanmar, as demonstrators expressed their support for the newly formed National Unity Government (NUG) composed of lawmakers elected in the November 2020 elections. Demonstrators also demanded the Association of Southeast Asian Nations (ASEAN) invite NUG representatives to the ASEAN leaders’ meeting convened on 24 April. Meanwhile, the Myanmar military launched deadly offensives against anti-coup demonstrators in Sagaing and Mandalay regions. Fighting between the Myanmar military and Kachin and Kayin rebels also continued throughout the week. Elsewhere, in the Philippines, a diplomatic spat with China continued after Chinese vessels delayed their withdrawal from disputed areas in the Philippines’ Exclusive Economic Zone (EEZ). In Thailand, anti-government demonstrations increased last week as members of the People’s Party rallied across the country. In Indonesia, labor unions held a protest ahead of the first hearing of the judicial review for the controversial Omnibus Law. Finally, in Malaysia, opposition parties led a protest calling for an end to the state of emergency, which has been in place since January 2021.

In Myanmar, anti-coup demonstrators took to the streets for the twelfth consecutive week to express their opposition to the military junta. Demonstrators also expressed their support for the newly-formed NUG and called on countries to recognize the NUG as the legitimate government of Myanmar. The NUG, made up of elected lawmakers and prominent activists, was formed on 16 April. Ahead of the ASEAN leaders’ meeting on 24 April, the NUG issued a statement calling for international recognition and an invitation to the meeting (Channel News Asia, 18 April 2021). The bloc has been criticized for only extending an invitation to the leader of the military coup (Irrawaddy, 23 April 2021). On the day before the meeting, around 150 demonstrators held a protest march in downtown Yangon, stating that the military leader’s attendance would only serve to legitimize the unlawful takeover of power on 1 February (AP, 24 April 2021). The march also marks the first open demonstration in downtown Yangon in recent weeks after crackdowns and increased surveillance by security forces have quelled protest activities.

Meanwhile, clashes between the military and anti-coup demonstrators continued in Sagaing region, which has seen some of the most persistent armed resistance to military rule in the past few weeks. On 20 April, Myanmar military soldiers launched a deadly operation against demonstrators in Yinmarbin township, which resulted in the deaths of five demonstrators and two soldiers. During the offensive, drones and long-range artillery were reportedly used by the military to track and attack the positions of demonstrators (Myanmar Now, 21 April 2021). Elsewhere, in Mandalay region, a two-day battle between security forces and demonstrators defending themselves against the regime’s violence resulted in six members of the regime’s security forces being killed (Irrawaddy, 19 April 2021).

In Thailand, there was a significant increase in anti-government demonstrations last week, with the majority of demonstrations led by the People’s Party. During the week, daily demonstrations were held by the People’s Party members who stood still for 112 minutes to denounce the use of Article 112 of the Thai Criminal Code — or the lèse majesté law — to detain protest leaders. The series of demonstrations were held to express solidarity with protesters, who have been demonstrating daily for over a month in front of the Supreme Court in Bangkok. On 23 April, two prominent leaders of the anti-government movement were released on bail after two months of detention. Nineteen other protesters remain behind bars, including two leaders who have been on a hunger strike for over a month (Bangkok Post, 23 April 2021).

Lastly, in a rare show of unity, members of several opposition parties in Malaysia submitted a memorandum to demand an end to the state of emergency (Malaysiakini, 21 April 2021). Following a surge in the number of COVID-19 cases in January 2021, Malaysia has been placed under a state of emergency to tackle the third wave of the pandemic. Under the state of emergency, all parliament and state assembly sittings — and all national, state, or by-elections — have been suspended (The Straits Times, 12 January 2021).

Anders Lee is the East Asia Assistant Research Manager at ACLED. He holds an MSc in Development Studies and has experience conducting research on development issues in Myanmar. His research interests include international migration and post-conflict state building.
Luther Aquino

Luther Aquino is a Southeast Asia researcher at ACLED with a focus on the Philippines. He holds an MA in Philosophy, with a focus on political philosophy. His primary research interests are democracy, social movements, and queer theory.
Shintya Felicitas

Shintya Felicitas is a Southeast Asia Researcher at ACLED handling Brunei, Indonesia, Malaysia, and Singapore. She holds a BSc in Communication Science and had experience working as a journalist. Her interests include advocacy for human rights and gender equality in the political field.
29 April 2021
Share
TweetShare on Twitter Share on FacebookShare on Facebook Share on LinkedInShare on LinkedIn

Anders Lee is the East Asia Assistant Research Manager at ACLED. He holds an MSc in Development Studies and has experience conducting research on development issues in Myanmar. His research interests include international migration and post-conflict state building.