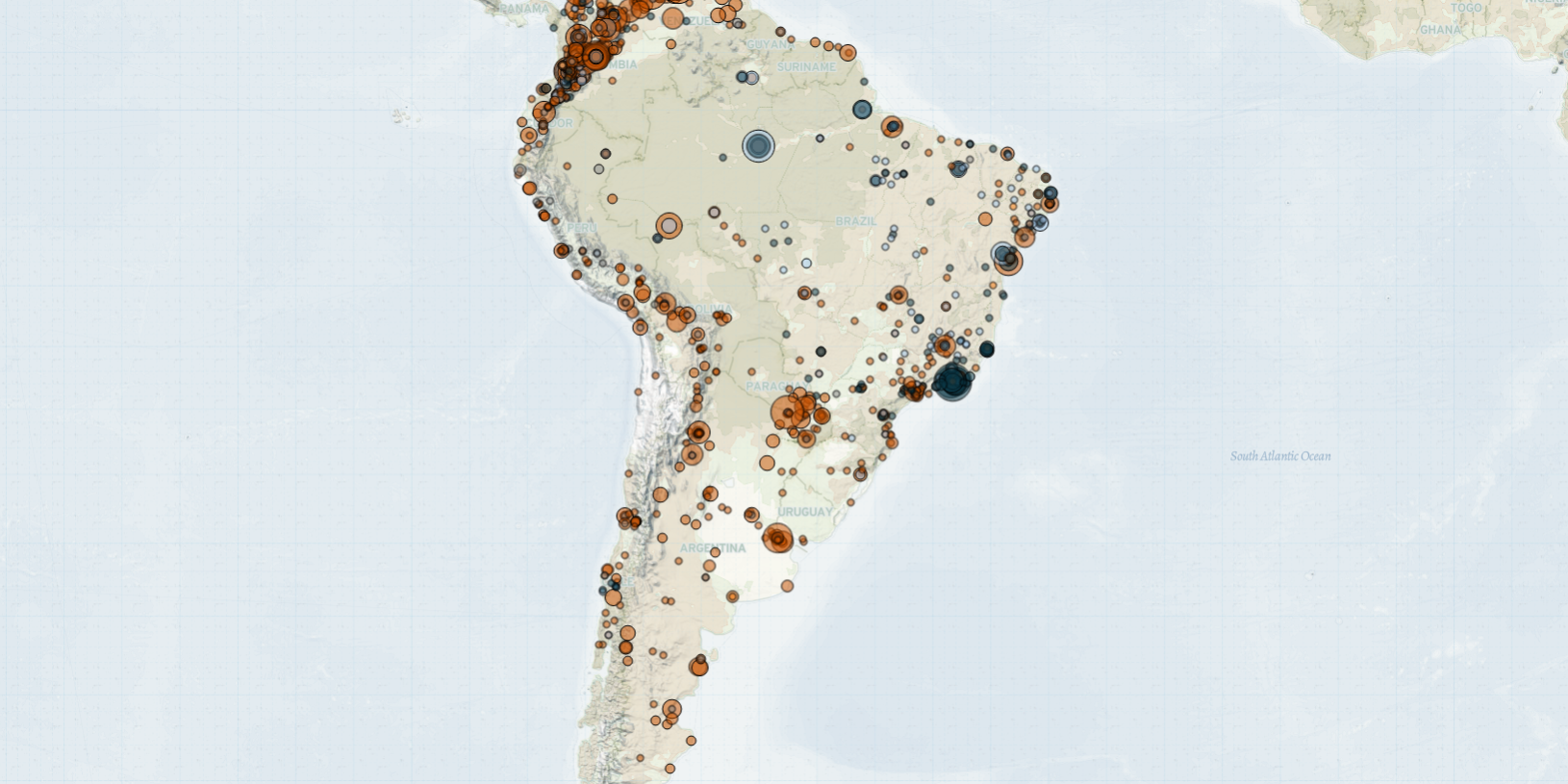 Last week in South America, nationwide anti-government demonstrations were held in Colombia. In Venezuela, a ceasefire was reached after more than two months of clashes in Apure state. Tensions continued to mount in Peru ahead of the second round of the presidential elections, which took place on 6 June. In Brazil, thousands took to the streets to protest against President Jair Bolsonaro and his mishandling of the coronavirus pandemic (Folha de São Paulo, 29 May 2021). Meanwhile, feminist organizations took to the streets in Argentina against femicide and gender-based violence. Finally, small farmers protested in Paraguay against a bill aiming to modify the country’s Agrarian Statue.

In Colombia, anti-government demonstrations continued for the fifth consecutive week, although events decreased by almost a quarter compared to the previous week. Demonstrations were mostly reported in the departments of Santander, Norte de Santander, Valle del Cauca, Cauca, and the capital city of Bogotá (El Espectador, 3 June 2021). Despite several meetings, no agreement was reached between government representatives and members of the National Strike Committee (CNP), which initially called the protests (El Tiempo, 4 June 2021). The CNP demands the demilitarization of the main cities to further advance talks (El Espectador, 31 May 2021). Demonstrators are calling for reforms in several sectors of the government, including in health, education, and security.

Furthermore, backlash against the National Strike (Paro Nacional, in Spanish), as the protest movement is being called, has begun to mount. Pro-government demonstrators in the main cities of the country — such as in Bogotá, Medellín, and Santiago de Cali — express support for the police repression of anti-government demonstrations and demand an end to the strike. Since the beginning of the unrest, more than 2,800 roadblocks have been reported, disrupting transportation of food supplies and other essential goods across the country (El Colombiano, 31 May 2021). As a result of increasing public pressure and negotiations, the main roads have been cleared of blockades and normal traffic has been restored.

Meanwhile, a ceasefire was declared between the military forces of Venezuela and members of a dissident faction of the Revolutionary Armed Forces of Colombia (FARC) after 11 weeks  of intense clashes in Apure state (El Carabobeno, 31 May 2021). The conflict, which erupted on 21 March on the Venezuelan-Colombian border, has cost the lives of at least 16 soldiers and 10 FARC dissidents. At least eight soldiers were also kidnapped and later released by rebels, while three soldiers are still missing (El Pitazo, 30 May 2021).

Tensions continued to mount in Peru during the week before the second round of the presidential elections on 6 June. Last week, thousands marched through the streets of the capital, Lima, in support of right-wing candidate Keiko Fujimori, leader of the Popular Force party (FP) (Diario Correo, 30 May 2021). Demonstrators raised concerns over the possible ascension of communism in the country if left-wing candidate Pedro Castillo wins the presidential election. Meanwhile, supporters of Free Peru (PL), Castillo’s party, took to the streets in the city of Iquitos to complain about the risk of election fraud. They claim the FP party was planning to illegally interfere with the voting, and called on authorities to act with transparency. On 29 May, in Arequipa city, Keiko Fujimori and her supporters were met with locals throwing fruit and rocks at them as she arrived in the city to attend a debate. Some of Keiko’s supporters were slightly injured during the event (Diario Correo, 29 May 2021). As of 8 June, with 97% of the votes counted, Castillo leads with over 50% of votes, with Fujimori narrowly behind with just under 50% (Oficina Nacional de Procesos Electorales, 8 June 2021).

Meanwhile, in Brazil, thousands of people took to the streets in dozens of cities to call for the impeachment of President Jair Bolsonaro due to his mishandling of the coronavirus pandemic (Folha de São Paulo, 29 May 2021). Protesters demand a more efficient vaccination campaign and the payment of an emergency allowance for the duration of the pandemic. The demonstrations were organized by unions, social organizations, and left-wing parties and were mostly peaceful. A case of police brutality was reported in the city of Recife in Pernambuco state, where two civilians, who were not taking part in the protest, went blind after being hit by rubber bullets (G1, 30 May 2021). In the cities of São Paulo and Rio de Janeiro, large-scale protests took place, with organizers estimating 80,000 participants in São Paulo alone (Folha de São Paulo, 29 May 2021). On 2 June, pot-banging protests were also reported in several cities during the president’s televised speech, demanding his resignation amid increasing dissatisfaction with the economic, social, and political situation in Brazil (G1, 2 June 2021).

In Argentina, feminist groups took to the streets across the country on 3 June to celebrate the six year anniversary of the first march “Not one (woman) less” (Ni una menos, in Spanish). They called for government measures to reduce femicide cases, provide justice for the victims, and to end gender-based violence. The annual march began in 2015 in repudiation of the killing of a pregnant 14-year-old girl by her boyfriend in the city of Rufino (BBC, 3 June 2020). The “Not one (woman) less” movement has since spread across Latin America and other regions. The social movement gives visibility to femicides and other gender-related topics, such as the legality of abortion and the gender pay gap (The Guardian, 4 June 2020).

Finally, in Paraguay, small farmers and members of the National Peasant Federation (FNC) staged several protests in at least five departments of the country against the approval of a land-related bill by the Lower House. The bill aims to modify the Agrarian Statute, by allowing the formal demarcation of around 1,300,000 hectares of state land illegally occupied by producers (ABC, 4 June 2021). The FNC claims the measure would benefit the powerful agribusiness from both Paraguay and Brazil, who mostly occupy these lands instead of small and local farmers (Ultima Hora, 3 June 2021). On 3 June, the bill was rejected by the Senate and sent back to the Lower House (Ultima Hora, 3 June 2021).