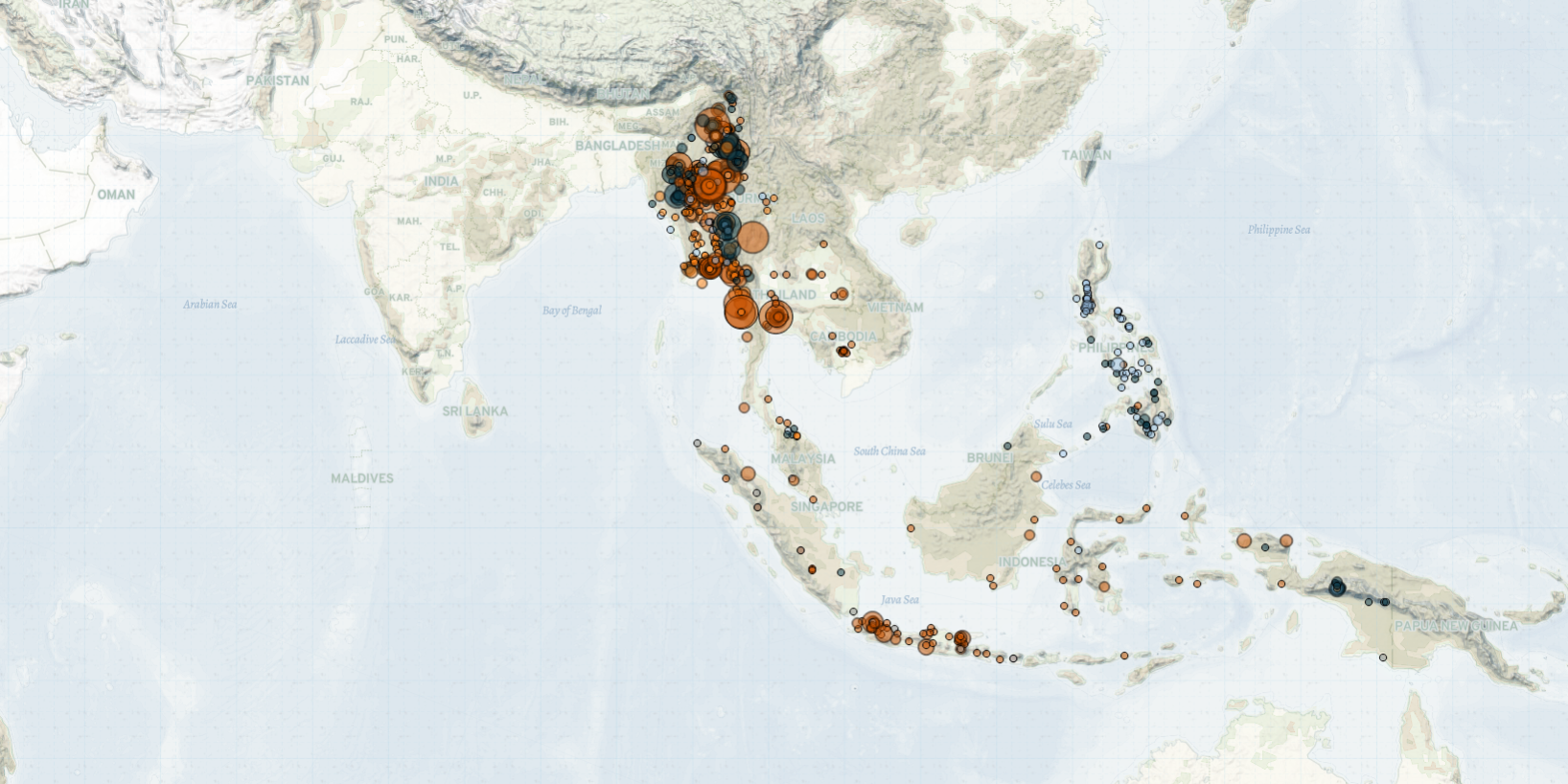 Last week in Southeast Asia, anti-coup protesters in Myanmar continued to demonstrate against military rule. Meanwhile, there was an increase in targeted killings of security forces and military-appointed administrators. Additionally, fighting between the Myanmar military and local civilian defense groups continues unabated across the country. Local defense groups are also increasingly fighting against the Myanmar military alongside ethnic armed organizations (EAOs). In the Philippines, the high profile killings of peace consultants for the National Democratic Front (NDF) by police was strongly condemned by human rights groups and the Communist Party of the Philippines (CPP). Meanwhile, separatist violence increased in West Papua, Indonesia as the government persists in its efforts to renew the region’s Special Autonomy status. Lastly, tensions in the South China Sea were reignited following accusations by Malaysia that Chinese warplanes flew into its airspace.

Four months after overthrowing the democratically-elected government, the military in Myanmar continues to struggle to bring a defiant population under its control despite deadly crackdowns by security forces. Anti-coup demonstrators continue to stage rallies across the country, with the majority of protests concentrated in Mandalay, Sagaing, Tanintharyi, and Yangon regions. Notably, a reported 400 protesters held a flash mob-style protest in downtown Yangon on 4 June, said to be one of the largest protests in the city in recent weeks (Straits Times, 4 June 2021).

Separately, targeted killings of military and police personnel, local administrators, and members of the military-backed Union Solidarity and Development Party increased last week. Similar attacks also targeted individuals not participating in the civil disobedience movement as they were accused of being military informants. While some events were claimed by local civilian defense groups, the perpetrators for the majority of these attacks remain unknown. In Magway region, five civil servants were killed for allegedly assisting the military regime’s operations in Gangaw township. A local defense group later claimed responsibility for the clash and accused those killed of transporting arms for the regime, possibly as part of the new military-backed Pyu Saw Htee groups being formed to counter local defense groups (Irrawaddy, 1 June 2021).

Elsewhere, in the Philippines, the 28 May killing of two men who have served as peace consultants for the NDF — the political arm of the CPP — and an aide drew widespread condemnation from human rights groups and the CCP. Police claim that one of those killed — Reynaldo Bocala, whom they also claim to be a New People’s Army (NPA) leader — fired at them while they were serving him an arrest warrant, prompting them to return fire (Rappler, 29 May 2021). However, this account has been disputed by the CPP, which insists that the elderly victim was unarmed (Philstar, 29 May 2021). Human rights groups condemn these killings and call for an investigation. They especially want Bocala’s killing investigated because he should have enjoyed immunity from “arrest and killing” under the 1995 Joint Agreement on Security and Immunity Guarantees signed between the government and the NDF (Bulatlat, 30 May 2021).

In Indonesia, activity by Papuan separatists increased in Puncak regency, Papua province. In a series of events on 3 and 4 June, the West Papua National Liberation Army (TPNPB) fought with state security forces and shot dead at least four civilians, including the family of a village head. Civilian infrastructure, including airport facilities and villagers’ homes, were also burned down in the wake of the fighting (Tribun News, 4 June 2021). This spike in violence comes amid a boost in government efforts to renew the Papua Special Autonomy Law, which is due to expire in November of this year (Antara News, 7 June 2021). If the law is renewed, West Papua would remain part of Indonesia and would continue to receive funds from the federal government for development. While Jakarta has asserted that this arrangement is for the benefit of West Papua, Papuan groups say these funds have not brought meaningful peace nor development to the region (Jakarta Post, 11 March 2021). Since last year, Papuans have been protesting regularly to call for a referendum on independence.

Finally, tensions in the South China Sea heated up again last week after Malaysia accused China of flying 16 warplanes in tactical formation into the airspace over the Malaysian Maritime Zone (ZMM) near Borneo (Free Malaysia Today, 1 June 2021). Analysts remain skeptical of this claim, however (SCMP, 3 June 2021). The Royal Malaysian Air Force scrambled jets to intercept the Chinese planes, and they turned back without further incident (Free Malaysia Today, 1 June 2021). Nonetheless, Malaysia filed a diplomatic protest with the Chinese government and summoned the Chinese ambassador over what it considers to be a “serious threat to national sovereignty and flight safety” (Straits Times, 2 June 2021). Beijing, on the other hand, insists that its planes were carrying out “routine training” and that they did not violate any international laws (Asia Times, 2 June 2021). The rise in diplomatic tensions between the two countries comes just as tensions between China and the Philippines over territorial disputes in the South China Sea are simmering down. Over the past couple of months, Manila has filed numerous diplomatic protests with Beijing over the presence of Chinese vessels in its Exclusive Economic Zone (EEZ) (ABS-CBN, 29 May 2021).

Fiona Wong is a Methodology Coordinator at ACLED. She holds an MA in Human Rights and Democratisation, and her past research includes work with public policy think tanks and international human rights organizations. Fiona has also worked with human rights defenders across Asia and the Pacific.
Anders Lee

Anders Lee is the East Asia Assistant Research Manager at ACLED. He holds an MSc in Development Studies and has experience conducting research on development issues in Myanmar. His research interests include international migration and post-conflict state building.
10 June 2021
Share
TweetShare on Twitter Share on FacebookShare on Facebook Share on LinkedInShare on LinkedIn