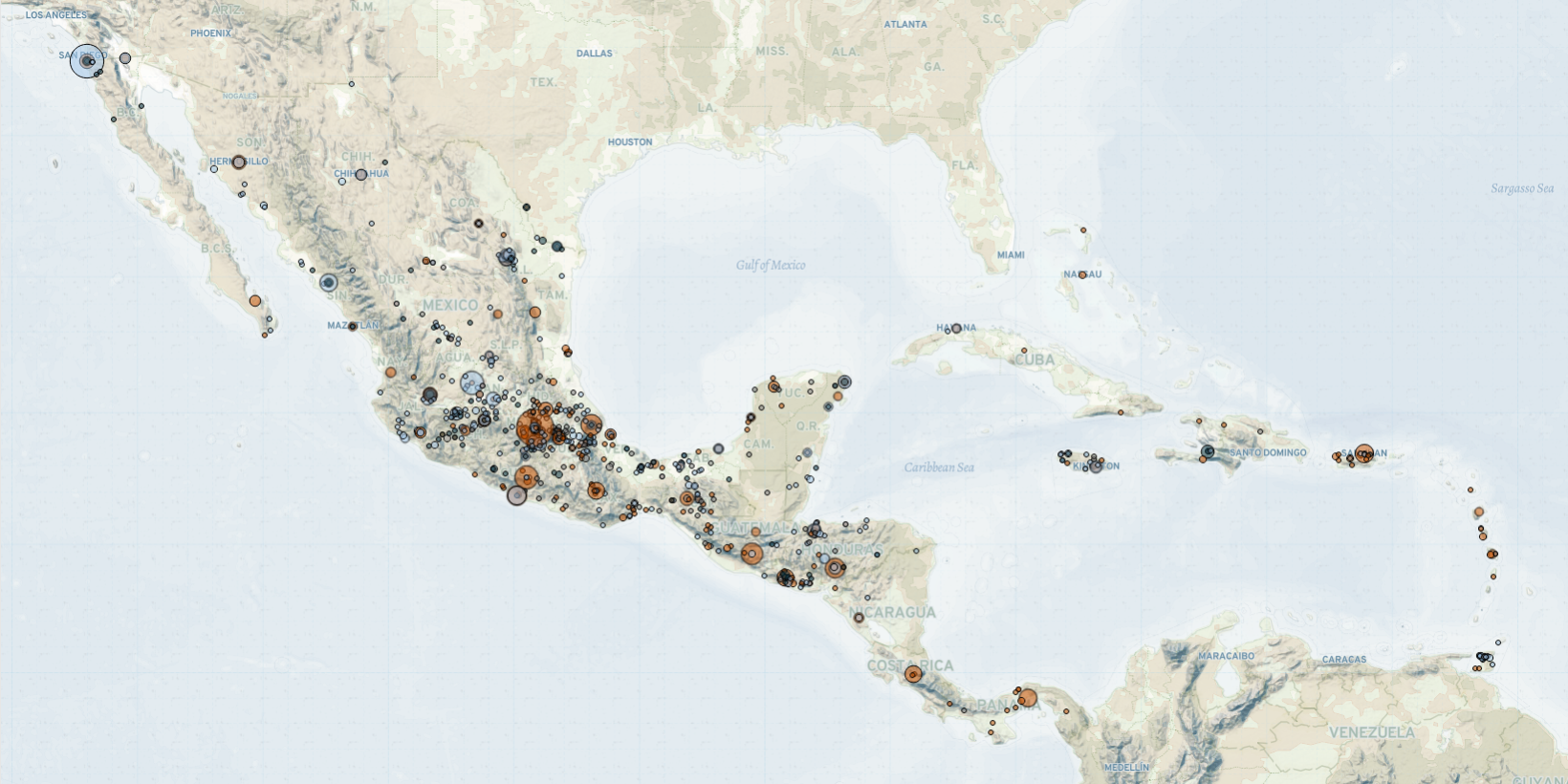 Last week in Mexico, Central America, and the Caribbean, levels of violence remained high. In Guatemala and Nicaragua, members of vulnerable communities continue to be the targets of attacks. In Guatemala, at least three members of the LGBT community were shot in the last two weeks, triggering a protest during Pride month. In Nicaragua, a member of the Miskito indigenous group was shot and killed by settlers in an attack likely related to land-grabbing. Meanwhile, Nicaraguan police continue to detain members of the opposition ahead of the November presidential election. In Mexico, two journalists were killed by unidentified armed men in the states of Mexico and Oaxaca. In Jamaica, high homicide rates prompted women to protest and demand security measures. Finally, in El Salvador, municipal workers protested against the mass dismissal of workers.

In Guatemala, protesters gathered in Guatemala City against corruption and the killing of two transgender activists. On 9 June, a members of OTRANS Queens of the Night, an organization advocating for the rights of transgender women, was beaten to death by two unidentified people. Days later, the leader of the same organization was shot and killed by unknown assailants in Guatemala City. In addition to the killing of the two activists, a gay man was shot and killed by unidentified armed men in Morales (France 24, 22 June 2021). Human rights organizations denounced the lack of investigations into hate crimes and the absence of legal provisions to protect members of the LGBT communities from discrimination and targeted attacks (Human Right Watch, 22 June 2021). Members of the LGBT communities in the Northern Triangle region have been facing high levels of persecution from law enforcement agents, gangs, and the wider community, leading many to attempt migrating to the United States (Amnesty International, 28 January 2021; Human Rights Watch, 7 October 2021). Anti-LGBT violence in the region can partially be explained by the role of religion in shaping societies and the promotion of homophobic views. Violence is further encouraged by impunity and weak anti-discrimination legal frameworks (CNN, 4 March 2017).

In Nicaragua, two Miskito indigenous men were ambushed and fired upon by an alleged group of settlers in the municipality of Waspam, killing one and injuring the other. In recent years, attacks over land conflicts have been increasing, as settlers seek to expand their farming and illegal logging activities (The Guardian, 29 April 2020). During this time, the government of Daniel Ortega has been accused of siding with corporate interests (Mongabay, 4 May 2020). Thus far in 2021, ACLED records at least four attacks against members of the Mayangnan and Miskito indigenous groups in Nicaragua. All attacks took place in the Costa Caribe Norte region.

Meanwhile, in the capital, Managua, police continue to detain members of the opposition, months ahead of the presidential elections scheduled for November 2021. On 13 June, police arrested at least six members of Unamos, an opposition party made up of dissident members of President Daniel Ortega’s Sandinista National Liberation Front (FSLN) party. They are accused of inciting foreign interference in national affairs, receiving foreign funds to conduct acts of terrorism, and supporting foreign actions going against the interest of the country (Deutsche Welle, 16 June 2021). Thus far in June, at least 13 members of the opposition have been arrested by state forces, as President Daniel Ortega seeks to secure his fifth term. This string of arrests has been criticized by the international community. While the United States, the European Union, and the Organization of American States (OAS) are discussing how to respond to Ortega’s crackdown, Argentina and Mexico have already recalled their ambassadors to Nicaragua (The Wall Street Journal, 14 June 2021; BBC, 21 June 2021). In addition to these arrests, the government has also adopted several legislative measures aimed at silencing the opposition. In May, parliament approved an electoral reform restricting members of organizations receiving foreign funds from participating in the elections (Human Rights Watch, 22 June 2021).

In Mexico, two journalists were shot and killed by unidentified armed men last week. In the state of Oaxaca, the editor of a local news platform was killed, presumably for his coverage of crimes during the electoral period. The victim was previously targeted for his journalistic activities in July 2020 and was awaiting police protection (Tabasco Hoy, 17 June 2021). This marks at least the fourth killing of a journalist in Mexico this year, with press workers often threatened and targeted for their investigative work into corruption and organized crime activities (The New York Times, 22 December 2020). On 3 May, World Press Freedom Day, civil society organizations demanded further action from the government to investigate and prosecute attacks against journalists, claiming that over 90% of attacks remain unpunished (Deutsche Welle, 3 May 2021).

In Jamaica, high homicide rates in Kingston Central prompted women to demonstrate against violence in the constituency, urging the government to declare it a Zone of Special Operations (ZOSO). Violence and homicides on the islands can largely be attributed to the operation of gangs, which trade marijuana for weapons coming from Haiti (Insight Crime, 1 April 2021). The government has attempted to combat gang violence by declaring areas ZOSOs. This special designation grants security forces additional powers, such as the setting of curfews and the possibility of searching a person or home without a warrant (Jamaica Observer, 31 March 2021). Thus far in 2021, at least 34 homicides have been recorded in Kingston Central by 16 June, representing a steep increase compared to January-June 2020 (Jamaica Observer, 20 June 2021). On 21 June, the government announced the imposition of a curfew in Kingston Central, in an attempt to curb homicide rates (Jamaica Gleaner, 21 June 2021). This comes days after the approval of an Anti-Gang Bill, adding a number of new gang-related offenses and setting provisions to improve the protection of witnesses (Jamaica Information Service, 2 June 2021).

Finally, in El Salvador, municipal workers protested in the San Salvador and La Paz regions against the dismissal of workers. Since the change of leadership in municipalities in May 2021 following the February elections, thousands of workers have been dismissed from municipalities ruled by President Nayib Bukele’s allies (Infobae, 13 May 2021). Similarly, at least 150 workers at the Salvadoran Legislative Assembly, who were hired by the opposition National Republican Alliance (ARENA) party, were dismissed last week (La Prensa Grafica, 5 June 2021). The mass dismissals are likely part of a “cleaning” process announced by the president following the removal of the attorney general and five judges of the Supreme Court in May (Semana, 3 May 2021; Deutsche Welle, 2 May 2021). Members of the international community and local civil society organizations have raised concerns about the seizure of the three branches of government and the Bukele administration’s increasing authoritarian turn (El Comercio, 2 May 2021). Following the legislative and municipal elections of 28 February,  President Bukele’s party, New Ideas (NI), and other parties supporting the government, have held the majority in Congress. With its ally, the Grand Alliance for National Unity (GANA) party, NI also won 179 out of the 262 municipalities of the country during the elections in February (Infobae, 13 May 2021).