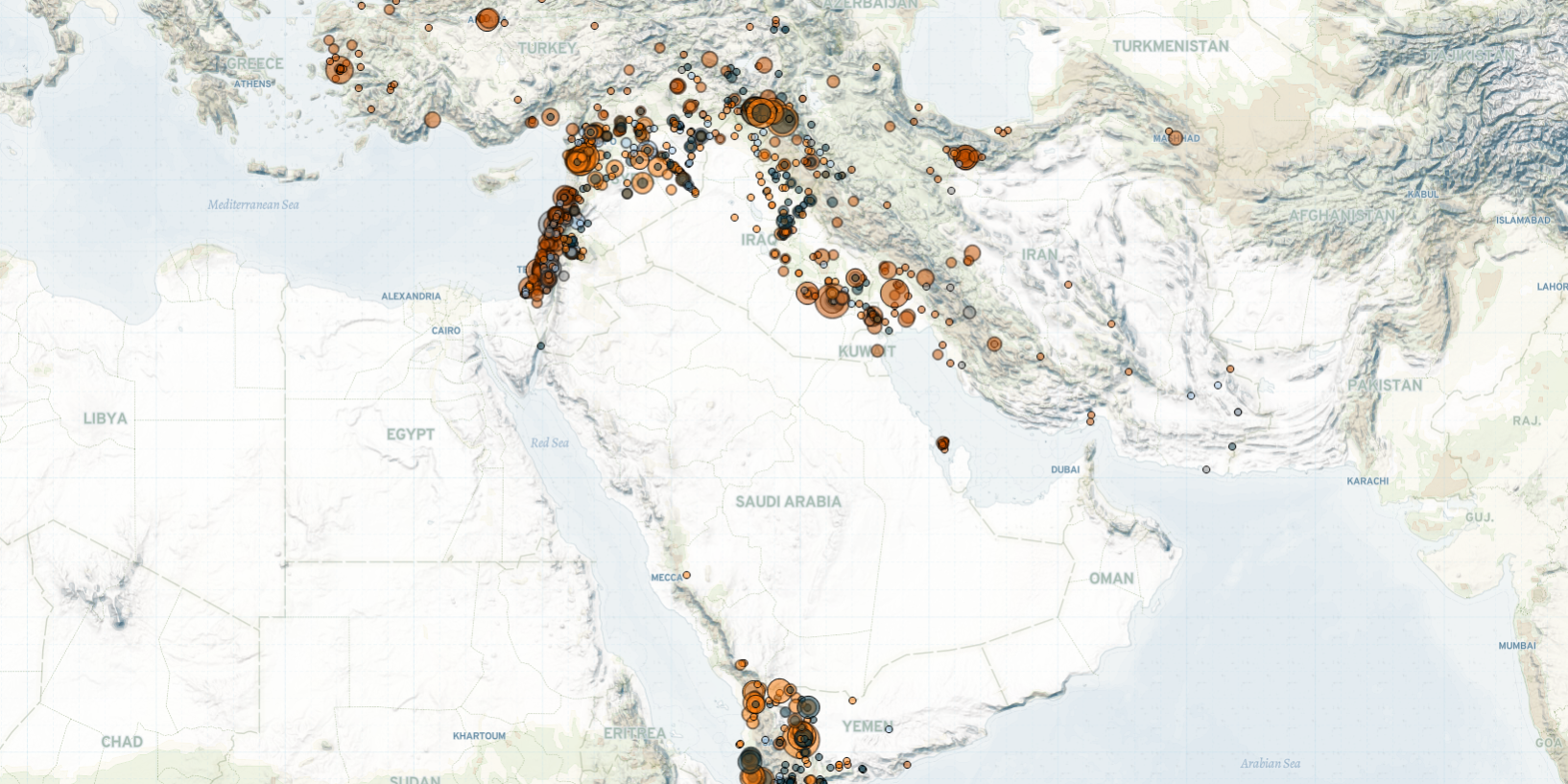 Last week in the Middle East, political violence increased in Yemen due to a Houthi offensive on Marib city, while Houthi attacks against Saudi Arabia continued. Meanwhile, Syrian regime forces shelled Turkish military positions in Idleb province, while suspected Islamic State (IS) militants attacked the vehicle of a Civil Council member in Deir Ez-Zor. In Palestine, the death of a critic of the Palestinian Authority (PA) led to anti-government protests. In Iraq, armed groups targeted power transmission towers across different provinces, damaging power lines and leading to electricity cuts. The attacks come amid ongoing protests against power outages. In Turkey, two attacks against Justice and Development Party (AKP) targets were reported. Lastly, demonstrations over deteriorating economic conditions continued in Lebanon.

In Yemen, the renewal of the Houthi offensive on Marib city last week resulted in levels of political violence in Marib governorate comparable to those seen at the height of the offensive in February and March 2021. Houthi attacks were launched on pro-Hadi forces on several fronts west of the city, in the Medghal, Raghwan, and Sirwah districts. No clear advances were recorded for either of the warring parties, with pro-Hadi forces being able to fend off Houthi attacks with the support of sustained Saudi-led coalition airstrikes.

In Shabwah governorate, tensions ran high between the Hadi government and the Southern Transitional Council (STC) last week, ahead of an event organized by the STC in Nisab district. Pro-Hadi forces arrested STC sympathisers and deployed forces to the district throughout the week. They also fired artillery shells towards residential areas, reportedly to scare people away from participating in the event (Al Mashhad Al Araby, 26 June 2021). As a result, the STC announced the suspension of all communications with the Hadi government in the ongoing talks between the two parties in Riyadh (South24, 26 June 2021).

In Saudi Arabia, Houthi attacks continued at a sustained rate last week, targeting the provinces of Asir, Mecca, and Najran. On 19 June, Saudi forces claimed to have intercepted as many as 17 drones launched towards the kingdom (Al Arabiya, 19 June 2021).

In Palestine, the death of Nizar Banat, a vocal critic of the PA, led to ongoing demonstrations in the West Bank beginning on 24 June. Banat was beaten to death during a raid by over 20 PA security officers on his home in Dura. He was a candidate for the Freedom and Dignity electoral list for the Palestinian legislative elections that were to take place last month. The elections were postponed due to a dispute over voting rights in East Jerusalem (BBC News, 25 June 2021). Banat had called out PA officials for corruption and urged Western governments to stop providing financial support to the PA (NBC News, 24 June 2021). Thousands of people attended Banat’s funeral in Hebron and chanted slogans against the PA and President Mahmoud Abbas (Times of Israel, 25 June 2021).

In Turkey, a local AKP party building was targeted by unidentified assailants with a Molotov cocktail in Hani town last week (Rudaw, 19 June 2021). In a second attack, an AKP executive was injured by a firearm in Hazro town. Both incidents occurred in the Kurdish-majority Diyarbakir province (Rudaw, 19 June 2021). The attacks came a week after an attack on a pro-Kurdish Peoples’ Democratic Party (HDP) provincial office in Izmir that left a female party member dead.

Lastly, in Lebanon, demonstrations against deteriorating economic and living conditions continued nationwide. Around 50 demonstration events were reported, approximately a third of which turned violent as demonstrators blocked roads with rocks, burning waste bins, and tires. The demonstrations came as the Lebanese pound fell to a record low on 24 June (L’Orient Today, 24 June 2021), and electricity cuts left citizens relying on private generators amid a fuel shortage. Several fistfights at gas stations were reported as residents waited in line for hours to get fuel. In response to the fuel shortage, caretaker Prime Minister Hassan Diab approved fuel imports at a rate higher than the official exchange rate, effectively reducing fuel subsidies (Al Jazeera, 25 June 2021).