Fact Sheet: Global Demonstrations Against the Russian Invasion of Ukraine

Following the Russian invasion, a wave of demonstrations in solidarity with Ukraine spread around the world. Between 24 February and 4 March, ACLED records more than 1,800 demonstrations in support of Ukraine and against Russian aggression globally. During this time, demonstrations were reported across at least 93 countries and territories (see map below). Nearly all of these demonstrations — over 99% — were peaceful (i.e. protesters engaged in neither violence nor destructive activity).

A significant number of these demonstrations were recorded in Russia, which was only surpassed by the United States, Italy, and France.1The United States, France, and Italy were three of the five countries home to the most demonstrations last year. The high level of mobilization comes despite concerted government efforts to suppress anti-war protest activity in the country (see map above). Authorities intervened in 95% of all anti-invasion and Ukraine solidarity demonstrations in Russia between 24 February and 4 March (see map above). Russian forces also intervened in at least five anti-invasion demonstrations in occupied areas of Ukraine. In the Zaporizhia region, Russian forces opened fire on anti-invasion demonstrators, injuring several.

The state response in Russia is the second most significant crackdown on demonstration activity in the country since ACLED coverage began in 2018, eclipsed only by the level of state intervention in demonstrations responding to the arrest of prominent dissident Alexei Navalny in January 2021 (see line graph below). 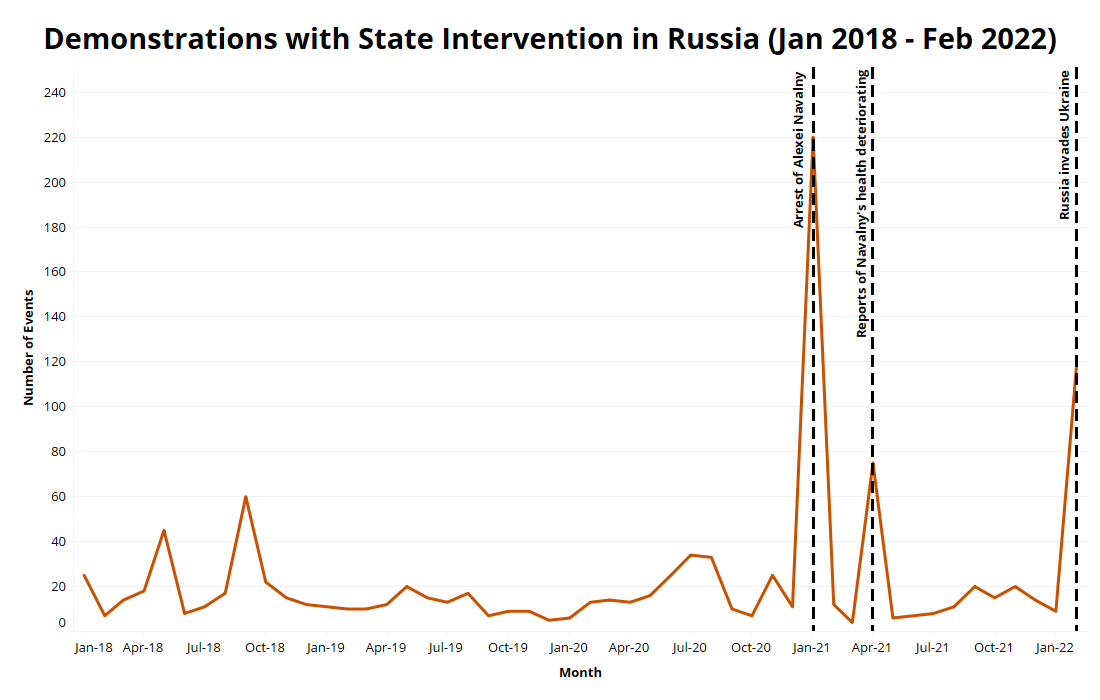 Outside of Russia, the opposite is true, with the overwhelming majority of demonstrations — 98% — proceeding without state intervention. Exceptions included demonstrations involving acts of graffiti outside Russian embassies and on monuments, as well as some clashes with police, which led to a small number of arrests in several countries. In Kazakhstan, demonstrators were arrested for carrying out an ‘unsanctioned’ demonstration outside the Russian consulate in Almaty. Notably, the intervention by Kazakh authorities comes less than two months after they sought Russian intervention to suppress a nationwide anti-government demonstration movement.