< Back to Africa hub

In January, political violence events involving Wagner Group reached their highest level in Mali since the Russian private military company deployed in late 2021 (for more on Wagner Group, see Wagner Group Operations in Africa). Wagner Group primarily operated alongside Malian military forces in the Mopti region, with notable growth in airstrikes in January. Over half of violent events involving Wagner Group in January targeted civilians. This violence was concentrated in the Djenne and Douentza circles, and resulted in more than 40 reported civilian fatalities. While less frequently than in Mali, Wagner Group also operated across the Central African Republic (CAR) in January, primarily clashing with militias allied with the Coalition of Patriots for Change (CPC). Fighting with CPC militias was widespread across Nana-Mambere, Ouaka, and Vakaga prefectures.

Meanwhile, the Siriri Coalition – a political and armed group composed of several rebel militias – announced a southward offensive from their northern bases in Vakaga and Bamingui-Bangoran prefectures towards Bangui to overthrow the Touadera government.2Siriri-Paix, 1 February 2018; Corbeau News 1 January 2023 After the announcement, the former general officer of the Unit for Peace in the Central African Republic, Abakar Amodou, deserted the demobilization process with fighters in the southeastern Haut-Mbomou prefecture and announced his alignment with the Siriri Coalition.3Corbeau News, 2 January 2023 Emerging reports on the Siriri Coalition show evidence of foreign mercenary involvement from Chad and Sudan.4Corbeau News, 12 December 2022

Cameroon: Ongoing escalation of Ambazonian violence in the Nord-Ouest and Islamist militant raids in the Extreme-Nord

Levels of political violence in the Nord-Ouest region rose for the fourth consecutive month in January, driven by violence against civilians committed by Ambazonian separatists and military forces. Cameroon military deployed additional troops to areas within Bui and Mezam divisions; yet, the latter became an area of increased attacks on civilians by soldiers.5Cameroon Online, 19 January 2023; Cameroon Online, 3 January 2023 In addition, Ambazonian separatists reportedly killed two Nigerian Fulani pastoralists who had crossed over to Cameroon to find food for their livestock and refused to pay a tax to the separatists. The attack led to a reprisal attack by Fulani pastoralists, resulting in several reported casualties and the death of the traditional ruler of Munkep. Despite escalating violence, the government refused an offer of external mediation from Canada, the most recent foreign government to offer such assistance.6Voice of America, 24 January 2023

In the Extreme-Nord region, Islamist militants continued a sustained increase in looting and property destruction in recent months in Mayo-Sava and Mayo-Tsanaga departments. While the rise in looting and property destruction does not correspond to usual increases during the dry season, some have linked the raids to the rising criminalization of jihad and partnerships with criminal groups in the Extreme-Nord region, with looting in Cameroon used to fund activities in neighboring countries.7Institute for Security Studies, 26 October 2022; Institute Françaid des Relations Internationales, 8 June 2022

International negotiations and the East African Community (EAC) joint military forces failed to force a withdrawal of the March 23rd Movement (M23) from conquered territories in Rutshuru territory of Nord-Kivu province, as reports emerged of ongoing Rwandan support and M23 reinforcing its ranks in Bwito chefferie (chiefdom).8Radio Okapi, 19 January 2023 The failure of the M23 to withdraw comes amid increasingly direct confrontations between Rwanda and the DRC, with Rwandan forces (RDF) shelling a Congolese military plane on 24 January. The fighter jet allegedly crossed into Rwandan airspace and was the third time the RDF had shot at a Congolese military aircraft in recent months. Additionally, an attack by the Union of Revolutionaries for the Defense of the Congolese People faction of Cooperative for the Development of Congo (CODECO) at an internally displaced persons camp in Plaine Tsavo reportedly left seven civilians dead.

Local perceptions of international peacekeepers and joint forces further diminished following the ongoing violence carried out by armed groups in the eastern provinces, evidenced by protests and riots against foreign troops in Nord-Kivu and Ituri provinces. Demonstrators cited the failure of international forces to respond to a series of attacks by the CODECO in the Djugu and Mahagi territories. The violence sparked unrest among residents, who demonstrated outside a nearby United Nations peacekeeper’s compound. UN forces retaliated by opening fire on demonstrators, reportedly injuring 16 people. In addition, the discovery of mass graves of 49 civilians around Nyamamba in Djugu territory, led to anti-EAC demonstrations by civil society organizations in Goma who questioned the effectiveness of the EAC joint force.9Actualite, 18 January 2023

In Nigeria, election violence continued throughout January, including a more than doubling of violence targeting government officials compared to the monthly average over the past year. Attacks against government officials surged in Imo, Osun, and Niger states. In Imo state, an unidentified group abducted and reportedly beheaded the Sole Administrator of Ideato North Local Government Area (LGA). Violence targeting political party supporters was also highest in Imo state, and included the reported killing of an All Progressives Congress ward chairman and the abduction of five other party chieftains in Onuimo LGA.

In addition to the violence surrounding the upcoming general elections on 25 February, state forces carried out sustained high-fatality airstrikes in January, including rare bombardments in Sokoto state. Military forces have increased the use of airstrikes against bandits and Islamist militants since August 2022. Yet, some aerial operations have resulted in severe collateral damage among civilians and unintended armed groups. In Niger state, a local defense militia was mistaken for bandits and was bombed while on patrol, reportedly killing scores.10Nigeria Punch, 25 January 2023 Another airstrike from an alleged military drone allegedly killed at least 38 Fulani pastoralists and their cows in the Rukubi community, Nassarawa state. However, the state governor claimed that the bomb was not deployed by military forces.11Daily Trust Nigeria, 26 January 2023 Collectively, remote violence in January resulted in over 200 reported fatalities. While lower than the estimated total fatalities in December, fatalities from remote violence in the past two months have been the highest since November 2020.

For additional resources and in-depth updates on the latest political violence and protest trends, check our local observatories for Mozambique and Ethiopia, as well as our special Nigeria Election Violence Tracker project. 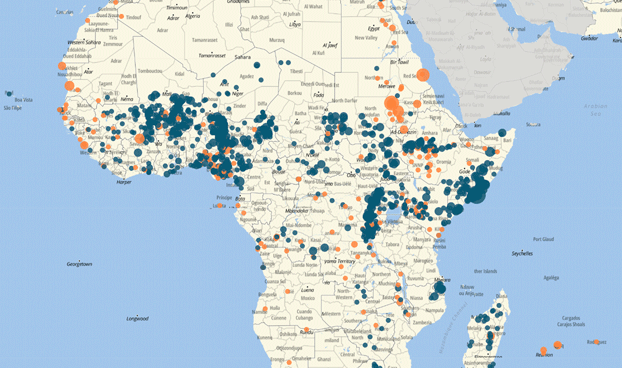 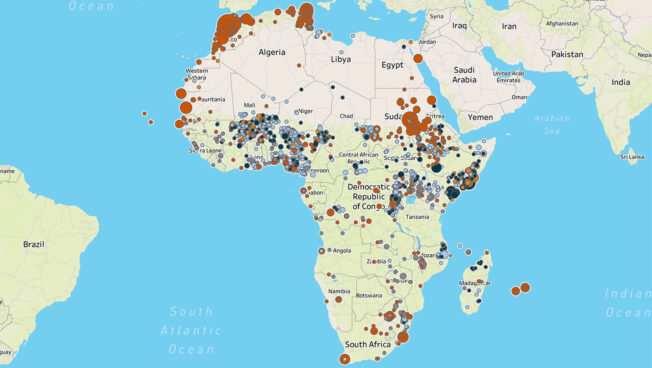