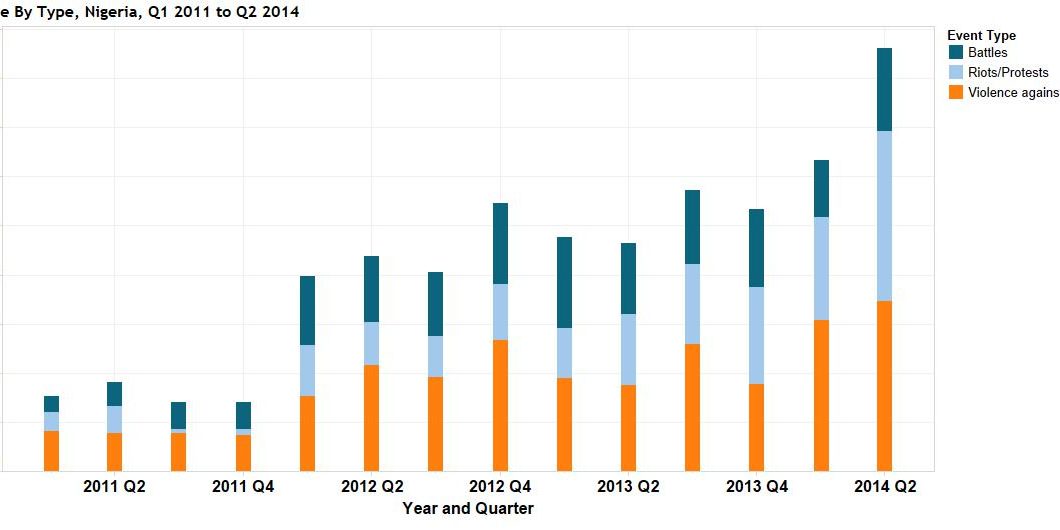 Nigeria is one of the most active countries in the ACLED database, in terms of both volume of events and fatalities. The country is currently host to numerous violent political actors including ethnic militias, militant regional groups and Islamist insurgents. Political violence of all types has risen substantially since 2011 with violence against civilians seeing the most dramatic increase. ACLED researchers have compiled a range of resources to aid the analysis of political violence within Nigeria. This includes a file specifically containing all events involving the militant Islamist insurgent group Boko Haram.

ACLED Nigeria Monadic File (January 1997 – July 26th 2014)
A monadic file providing data on all events involving Boko Haram within Nigeria. For a discussion of the difference between monadic and dyadic files, please see the User Guide below.

ACLED Nigeria Dyadic File (January 1997 – June 1st 2014)
A dyadic file for analysing all politically violent activity in Nigeria since 1997. For a discussion of the difference between monadic and dyadic files, please see the User Guide below.

ACLED Guide and FAQs for Media Users
A document which provides an overview of the ACLED project, the structure and content of the data, and addresses frequently asked questions.

Working Paper on Nigeria’s Boko Haram and Uganda’s LRA – Some Parallels
Boko Haram activity in comparative perspective with other violent groups on the continent.

The following reports have been published in the past two years, providing analysis of various aspects of Nigeria’s conflict dynamics, and the activity of Boko Haram specifically.
July 2014