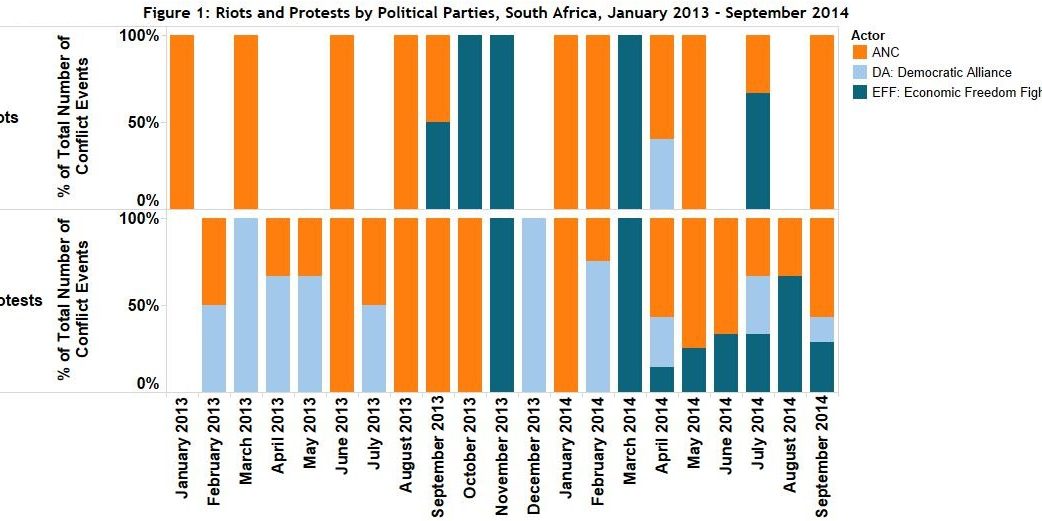 The May 2014 South African general election proved that the ruling African National Congress (ANC) is far from secure in its ruling seat. The ANC secured 62% of the vote, the rival Democratic Alliance (DA) won 22%, and in third place, the Economic Freedom Fighters (EFF) with 6%. EFF has proved to be one of the most interesting on the South African political scene (BBC, 9 May 2014).
The EFF was formed by Julius Malema, after he was evicted from his leadership position in the ANC’s Youth League for sowing discontent and failing to stick to the party’s line on multiple issues. The EFF platform is to move beyond the political freedoms won by the black majority in 1994, and secure ‘economic freedom’ through nationalisation, land redistribution and anti-capitalism (Desne, 2014). In essence, the EFF’s manifesto rests on the idea that the ANC has stalled in its drive to improve the lives of the South African majority, in failing to bring about change. Malema’s militant rhetoric and past use of racially charged language has led to the EFF being labelled by the ANC as ‘Nazis’ and ‘fascists’ (Marrian, 26 September 2014).

One of the defining features of the EFF is its use of stunts and protests to embarrass the South African government. Figure 1 shows that- in spite of the EFF’s relatively small size- their supporters and members have been responsible for an increasing number of politically motivated protests and riots. The most notable recent example is EFF MPs disruption of President Zuma’s question time by repeatedly chanting ‘Pay Back the Money’, a reference to Zuma’s lavish use of public funds to upgrade his house in Nkandla (Africa Confidential, 9 October 2014). Other examples include clashing with police in an attempt to storm Gauteng legislature, and throwing stones during a speech by Zuma in Sharpville.

Figure 2 shows the spatial distribution of riots and protests by political party members and supporters. Demonstrations by the EFF are highly concentrated within Gauteng, South Africa’s political and administrative centre. This suggests that the EFF is relying on the visibility afforded by protesting near the centres of power, where the eyes of the media are fixed upon them, rather than marching in the rural towns and disadvantaged suburbs where their message of economic redistribution and unfulfilled revolution carries the most weight.
The EFF is already showing signs of weakness. Dissatisfaction with the EFF’s ready acceptance of government resources, coupled with disagreements over land reform (the most controversial aspect of the EFF’s manifesto) has already led to a splinter party called the ‘New Economic Freedom Front’ (Raaf, 10 October 2014). In spite of this setback, the EFF seems to have caught the attention of South Africa’s media and provided another more radical alternative to the incumbent ANC.
The DA, as the other main opposition party, seems to be following a similar tactic to the EFF and has also staged numerous demonstrations in Gauteng over issues such as jobs and the proposed toll system for the roads. However these demonstrations differ from the EFF’s stunts by being largely peaceful. The DA also has a majority of seats in the Western Cape provincial parliament, giving the party a base where they can stage demonstrations that are guaranteed a significant turnout. This is an asset that the EFF currently lacks and the spatial distribution of its activity reflects this fact.
The spatial distribution of demonstrations by the ANC indicates that the party may be responding to the challenge posed by the opposition protest movements with counter-protests, disruption and even violence. Figure 2 shows that one of the hotspots for ANC protest is the DA stronghold of the Western Cape, where confrontations between ANC and DA supporters have repeatedly occurred. The other main hotspot, particularly for violent riots, is Gauteng, where both the DA and EFF are concentrating their demonstrations against the ruling party.
One trend that is not shown in the data is alleged involvement of ANC councillors in service delivery protests. Intra-ANC competition is apparently the driving force a significant portion of the increasingly violent demonstrations (Paton, 9 September 2014). This indicates that the ANC does not just face a challenge from the established DA and rising EFF, but also from factionalism within its own ranks.