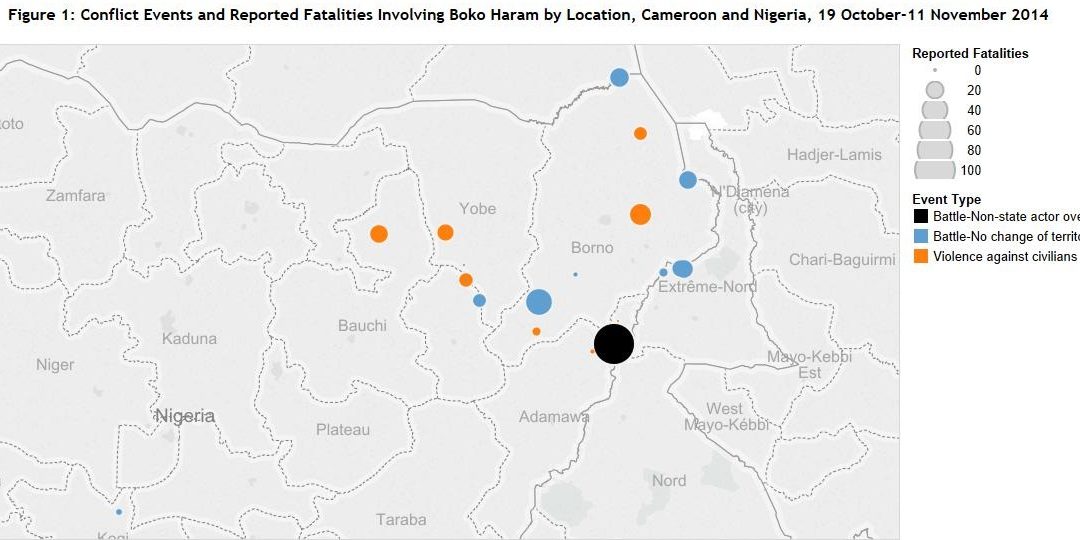 On the 17th of October, Hassan Tukur, a senior aide to President Goodluck Jonathan, announced that the Nigerian government had agreed a ceasefire with Boko Haram and secured the release of the 219 girls kidnapped from Chibok earlier this year (Al Jazeera, 18 October). Doubts were immediately cast on the validity of the government’s claim. Danladi Ahmadu, the alleged representative of Boko Haram, was unknown to experts and referred to the organisation by its internationally recognised name (Boko Haram), whereas the group’s leadership uses the title Jama’atu Ahlis Sunna Lidda’awati wal-Jihad.

Since the announcement of the ceasefire, violence involving Boko Haram has continued unabated. Figure 1 shows that battles between Boko Haram and the government have continued in both Nigeria and Cameroon. One of these engagements resulted in Boko Haram seizing control of Mubi, a commercial town in Adamawa with a population of over 100,000.
Figure 2 shows that the number of fatalities and conflict events resulting from Boko Haram activity  in the recent past. The composition of the group’s targets and opponents has not drastically changed since the announcement of the ceasefire. The weeks before and after the announcement both show similar levels of volatility and a similar pattern of peaks and troughs.

In early November, Boko Haram leader Abubaku Shekau released a video denying that Boko Haram agreed to a ceasefire with the government and reasserting that the group had no intention of releasing the kidnapped school girls (Johnston, 1 November 2014). The Boko Haram insurgency is a heavily politicised issue that could play a critical role in the 2015 election. Smear campaigns have attempted to tie politicians to the group and attempts to secure funding to fight the insurgency have been purposely blocked for political gain (Noaks, 22 October 2014). This raises the possibility that Danladi Ahmadu could have been a political trap set by rivals to embarrass the ruling People’s Democratic Party (PDP) before the election. As per the Nigerian constitution, the PDP needs to win 25% of the vote in at least 24 states in order to win the election (Noaks, 22 October 2014). Continually failing to address the security problems in the North could seriously damage the party’s chances of re-election, especially considering that Boko Haram is active in multiple northern states (see figure 1).
Nevertheless, both senior Nigerian and Chadian officials maintain that negotiations are being held with credible senior representatives of Boko Haram (Africa Confidential, 7 November 2014). Ahmadu supposedly got in contact with the Nigerian government through Chadian President Idriss Deby (Noaks, 22 October 2014). The seniority of the figures involved in negotiations with Boko Haram, as well as the involvement of more politically impartial actors such as President Deby, raises the possibility that negotiations could be occurring with a faction of Boko Haram. Analysts have argued that there are multiple Boko Haram factions and multiple ‘Abubaku Shekaus’, each a faction leader adopting the persona in order to communicate with the public and the state at large (Zenn, 30 September 2014). While the Nigerian state could be negotiating with a faction of Boko Haram,  the recent video denying the ceasefire agreement could be evidence of a schism emerging within the group.