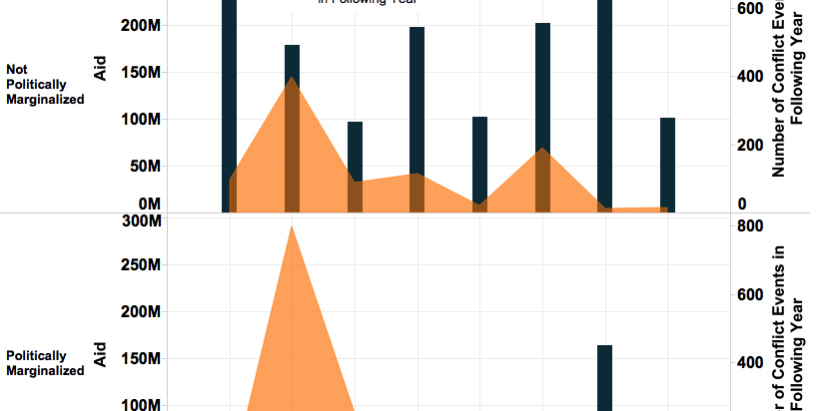 With aid to developing countries at an all time high (OECD, 2014), aid effectiveness – as well as the possible detrimental effects of aid – have been gaining increased attention from both the academic and policy worlds. One of these detrimental effects is the relationship between aid and conflict – especially given the further burden conflict can be on a state when pursuing development goals.
The relationship between aid and conflict, and the role of inequality, is clearer when using the most recent, disaggregated information on each critical parameter, including georeferenced conflict data from ACLED showing where conflict has occurred; georeferenced aid data from Findley et al. (2011a) and AidData to determine where aid projects are located;[1] and ethnic group mapping and political hierarchies from Raleigh (2014) based on the GeoEPR dataset to determine where ethnic groups are located and what groups are politically marginalized.
Reports and studies describe the aid and conflict nexus in a variety of ways.  Some argue that large inflows of aid can increase the ‘prize’ of conflict (especially if aid is lootable), hence increasing the opportunity for unrest (Collier & Hoeffler, 2004; Fearon & Laitin, 2003).  This argument would suggest that regions that receive a large amount of aid inflows in a given year might subsequently see higher instances of conflict, though the data suggest that there is only about a 0.3 correlation between the two. This contests the notion that large aid flows increase the size of the ‘pie’, making conflict more attractive to greedy individuals as these findings suggest that more aid will not necessarily lead to more conflict.
A question often asked about the interaction of aid and conflict is how one can determine whether aid fuels conflict, or whether aid goes to regions that have been experiencing conflict. Arguably, this would suggest that the relationship between the two may not be as ominous as some expect.  This argument suggests that regions seeing high instances of conflict in a given year might subsequently see high aid inflows, though the data suggest that there is again only about a 0.3 correlation between the two. This challenges the argument that the relationship between aid and conflict is simply a function of aid going to conflict zones.