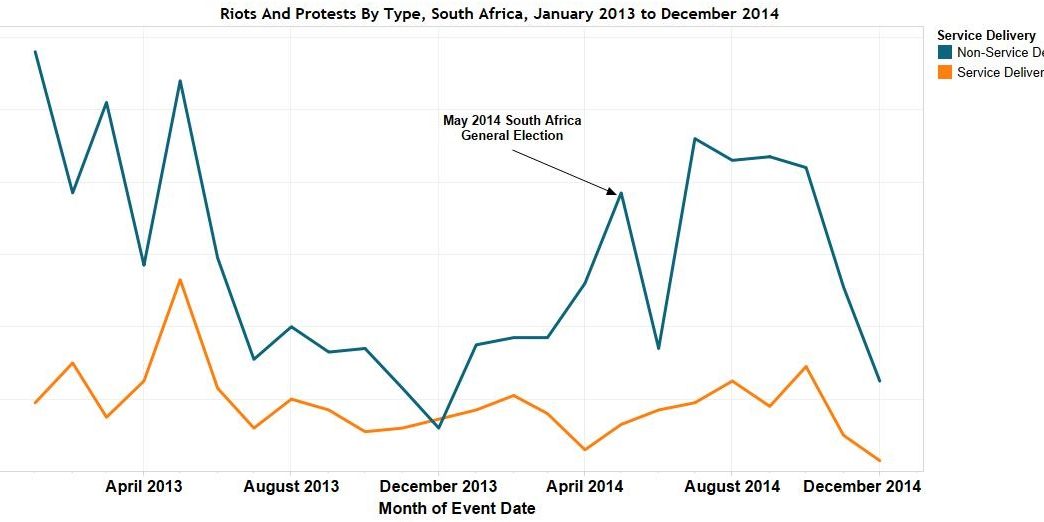 South Africa was the seventh most active country in the ACLED dataset in 2014, in spite of lacking any form of armed insurgency or rebellion. This means that the form of conflict in South Africa differs drastically from countries with similar activity levels such as Libya and Sudan. What has defined South Africa as a politically volatile country is the prevalence of protest and civilian collective action as a method of provoking a response from a secure incumbent government which faces no severe political threat, armed or otherwise.
The general election in May 2014 showed that the ANC still retained a secure, albeit diminishing, lead with 62% of seats in parliament and a majority in eight out of nine provincial legislatures (Smith, 9 May 2014). Elections, both general and municipal, are on a five year rotation; the population is unable to impose their political will through the ballot box for long periods of time. Furthermore, the ANC policy of ‘cadre deployment’, in which loyal and politically connected individuals are given municipal positions, means that public servants are more concerned about the support of party bosses than the electorate (Alexander, 2010).
As a result, demonstrations have become an important method by which communities interact with the local government. Riots and protests accounted for 82% of all conflict events in South Africa. The emergence of the ‘service delivery’ demonstrations by communities against the perceived substandard provision of utilities (such as water, sanitation, electricity and subsidised housing) by the local government shows that civilian collective action is becoming an useful tool in provoking a response from a secure government, which is often perceived as inflexible.