Egypt: Developments in Political Violence Patterns Through a Comparative Analysis of the January 25th Protest Anniversaries 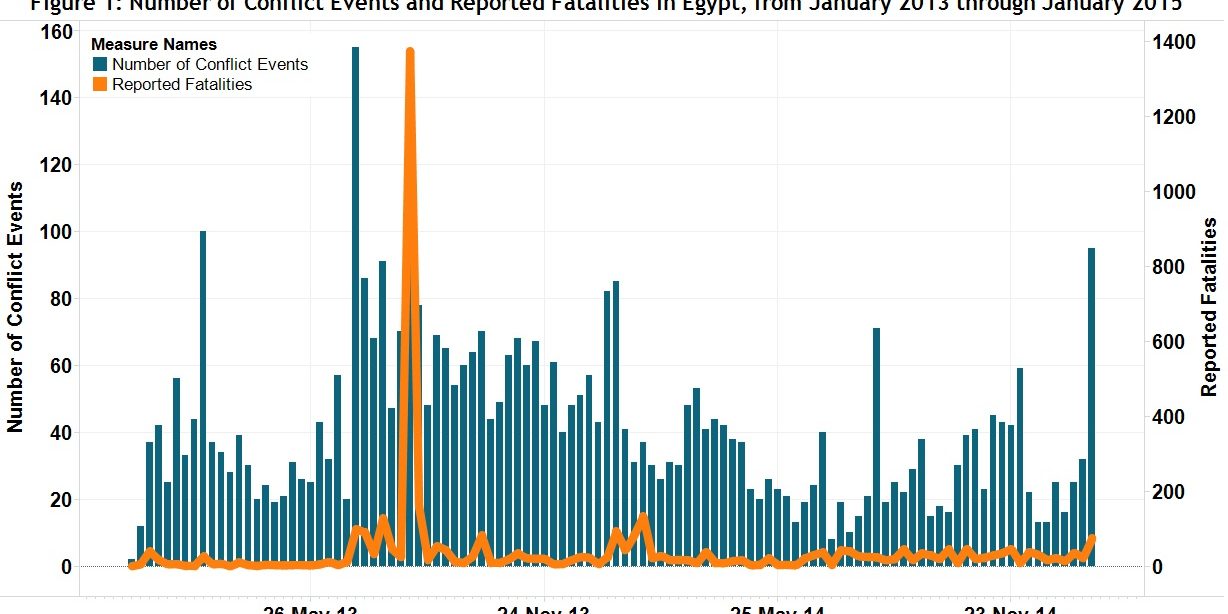 January saw heightened conflict activity in Egypt; a pattern that is evident in both 2013 and 2014. The over-whelming majority of these events can be understood as a resurgence of protests as demonstrators take to the streets during the week of the 25th January, the anniversary of the Arab Spring uprising. January 2015 was no exception, with the highest political violence levels recorded since Abdul Fattah al-Sisi assumed office in June 2014 (see Figure 1). In fact, last week was the most violent period in Egypt’s transition since similar protests in January 2014.

The events that unfold each year throughout the week of the 25th January can be explained by the incompatible “universes” that continue to occupy Egyptian political space. These are the “universes of transition” and the “universe of revolution” (Sallam, 10 February 2012). The first of these can broadly be defined by the attempt to subvert and channel the goals of the Egyptian revolution into organised institutional politics by the military leviathan. The universe of revolution on the other hand is representative of the civilian movements – NGOs, activists, and social movements – that continue to seek real trans-formation and a departure from limited reform within a framework of governance dictated by the Supreme Council of the Armed Forces (SCAF).
Whilst the jump in riots and protests emanates from the centrifugal processes dividing Egypt’s domestic political sphere, several other dynamics were also witnessed throughout the month. A comparative analysis of the 25th January protests reveals some interesting developments in the dynamics of political violence in Egypt. Firstly, fewer riots and protests were witnessed in January 2015 compared to 2014, although higher than in 2013. Second, a higher proportion of the violence involved remote violence (over a quarter of all conflict events from January 24th-31st), with energy infrastructure, train stations, security services and government buildings targeted nation-wide.
The Islamist militant group Ajnad Misr had previously claimed responsibility for a number of similar IED events to exact revenge for police repression of civilians, but the identity of attackers this month was largely unreported, despite the Egyptian government hastening to attribute blame to the Muslim Brotherhood (NYT, 31 January 2015). Some cases were attributed to cells operating in the Lower Egypt region. Whichever political actors were responsible, the attacks are indicative of measures taken by militants to display their capacity to informally organise and challenge the strength of the state despite the limits placed on their operations – following concerted efforts by the government to create a buffer zone in the border region of the Sinai and the revised protest law.

Thirdly, notwithstanding the fact that riots and protests accounted for over 46% of all conflict events from 25th-31st January, the highest number of fatalities were sustained through battles (approx. 44 recorded deaths) be-tween state security forces and political militia groups (see Figure 2). Furthermore, whilst protests diffused across many cities in the Lower Egypt region (see Figure 3), overall fatality levels from the protest events were lower than in 2013 and 2014. The bloodiest clashes occurred in Matariya district of Cairo, known for being a Muslim Brotherhood strong-hold.

The crackdown on the Muslim Brotherhood is not purely a campaign against the role of political Islam or anti-Islamist sentiment, as Egypt’s largest Salafist party, the Al-Nour Party, supported al-Sisi’s presidential campaign. Despite functioning as a religious-based party (which runs counter to article 74 within the revised Egyptian constitution) with ultraconservative belief systems, the party not only seized the window of opportunity left by the Brotherhood’s marginalisation to enter mainstream politics, but its members have not been subject to such large-scale repression (Ahram Online, 25 November 2014; Washington Post, 1 June 2014). This stands in direct contrast to the fate of the Freedom and Justice Party, the political wing of the Muslim Brotherhood, which was officially dissolved in Au-gust 2014, ruling out its participation in upcoming parliamentary elections in March.
However, the party suffers from internal rifts after initially backing the Muslim Brotherhood and then later sup-porting the push for their relegation with the ousting of Morsi in 2013. The party will have to ally with al-Sisi’s military-backed government to counter negative perceptions of Islamist currents, retain its influence, and guarantee the spoils of electoral privilege. But this will necessitate the party becoming more compromising on its ultraconservative policies. How long the Al-Nour party can continue this balancing act with rising challenges from Egypt’s secular parties may influence the political landscape in the coming months.
A more useful interpretation of al-Sisi’s continued campaign to crush the Muslim Brotherhood support base is that it is a reaction to the rising power the Islamist move-ment enjoyed during the formation of a Constituent Assembly in the post-Mubarak period. With Morsi as incumbent, he undertook a “purging of the governance net-works loyal to the former regime” (Slaughter and Isakhan, 2014: 157). Whilst critics of Morsi immediately accused this of being a strategy to secure outright power, it may well have been the case that he was attempting to fortify his position as President to carry out reforms, against the gaze of the threatened SCAF. All this points to need to examine the regime politics of Egypt, with two competing blocs, the army and the Muslim Brotherhood, locked in a political game for dominance.