Where’s ISIS in all this crisis? 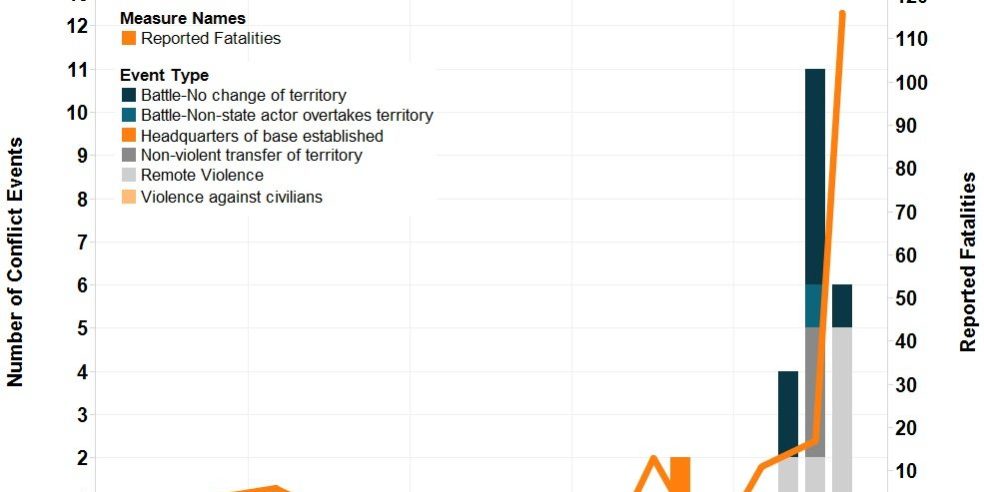 The Egyptian air force’s bombing campaign in Libya’s eastern city of Derna on the 16th February in retaliation of the killing of 21 Coptic Egyptians has sought to raise fundamental questions over the extent and reach of the Islamic State’s presence in Libya.  Yet somewhat less explored is the impact the heightened activity by militants supporting and pledging allegiance to the Islamic State will have on the political negotiation process between the divided Tripoli and Tobruk-based governments and the role that regional players may have on the future of stability in Libya.
Who stands to benefit?
On the battlefield, Islamic State militants pose a threat to both Dawn and Dignity factions currently opposed to each other. Misratan battalions were deployed by the Tripoli-based government to ‘re-establish control of Sirte’ after IS militants overran it. Members of Operation Libya Dawn have engaged in clashes in Nawfaliyah near Sirte. The Petroleum Facilities Guard, who lend tacit support to Operation Dignity forces in guarding the oil installations around Sirte, have clashed with Islamic State militants at Mabruk oil field.
However, it could be seen that amidst UN-backed negotiations to form a unity government, one party stands to gain from increased attention on IS in Libya, despite significant progress being made by Bernardino León in bringing the warring sides to the table. As Jason Pack illuminates in his Al Jazeera article on fracturing power blocs inside Libya, the UN talks have acted as an opportunity “to detach the extreme factions who favour military conflict from those who favour dialogue”. In theory, this approach holds that by seeking out moderates from both sides of Libya Dawn and Operation Dignity, consensus can be built to sketch out a framework for power sharing to move forward with plans for national stability. However, rampant attacks by violent Islamists could be understood as a mechanism to catapult IS into the political marketplace of elite bargaining, where they act as spoilers and may re-orientate the demands of the Operation Dignity-backed coalition.
In practice, this appears to be exactly the card being dealt. The announcement by Abdullah al-Thani’s internationally recognised House of Representatives to suspend participation in further talks scheduled in Morocco to broker a deal (Asharq Al-Awsat, February 24, 2015) appears to signal an attempt to renegotiate positions at the bargaining table.
The decision to boycott talks in reaction to the deadly Islamic State attacks in Qubbah this week that left over 40 people dead appears to be a set-back for the peace process. However, al-Thani looks to be reasserting his side’s legitimacy by capitalising on these events to galvanise support for the HoR at the expense of Omar al-Hassi’s General National Congress (GNC). This further marginalises disparate groups acting under the IS sphere of influence. This perspective on the Tobruk government’s bold move suggests that the recent upsurge in IS violence is changing the price of al-Thani’s bargaining chips, with the suspension of participation a tactical signal of his unwillingness to share power with Islamist-leaning factions, whether moderate or not.
International condemnation of Islamic State attacks has provided a further foothold for the HoR to elevate its legitimacy and crystallise the anti-Islamist agenda of Operation Dignity. In addition, the spate of attacks could not have come at a more opportunistic time for the government of Egypt, enabling Fattah al-Sisi to conduct a coordinated regional operation against Islamist militants to reaffirm his internal national agenda against the Muslim Brotherhood.
Localised nature of conflict vs. international network
Interpretation of the mobilisation of violent Islamist groups under the loose network the Islamic State is attempting to establish across North Africa and the Middle East must be treated with caution. Large-scale violent attacks and resultant casualties have become more pronounced over the last few months (see Figure 1) including a targeted attack on the Corinthia hotel in Tripoli on January 27th, the beheading of Egyptian Christians, and a concerted drive to gain control of institutions in Sirte. Groups acting under the remit of the Islamic State are not necessarily newly emergent groups but nascent groups competing for recognition of power. Acting under the auspice of Abu Bakr al-Baghdadi enables groups to build up their own capacities and channel resources to solidify their local dominance.

Nowhere has this been more pronounced than in the eastern city of Derna. Whilst frequently cited as being under the control of Islamic State militants, the situation on the ground appears to be more complex, reflecting intergroup tensions that are a microcosm of Libyan society at present. Following the breakdown of the Qaddafi regime, the various revolutionary, Islamist and criminal brigades that had formed in the uprising assumed control of a number of regions, with Ansar al-Sharia taking de facto control of Derna. Similarly, the Abu Salim Martyrs Brigade, a local Salafi group (Wehrey, July 12, 2012) established a security presence in the city throughout 2012 but has rejected support to ISIS which inflamed relations with the Islamic Youth Shura Council (SCIY) who have openly declared their loyalty to Abu Bakr al-Baghdadi. “The SCIY’s decision to join the caliphate is probably an attempt to obtain religious credibility as well as funding and military tactical assistance from Islamic State…to secure full control of Derna” (IHS Janes 360, October 6, 2014), indicating the highly localised geography of violence in Libya.