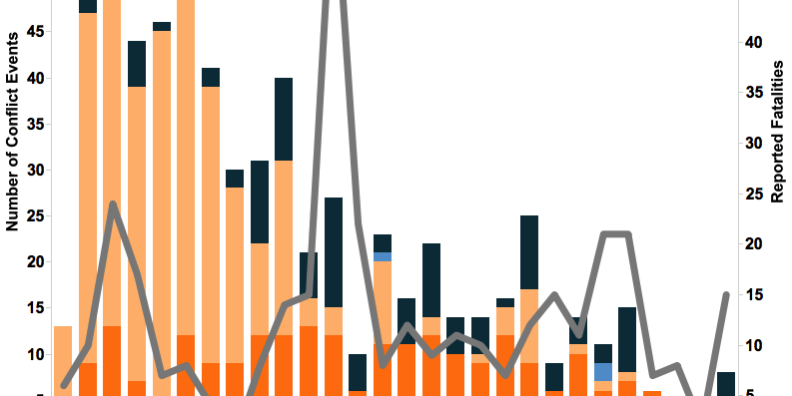 A new update of the recent unrest in Burundi, covering events from 26 April to 31 October 2015 has been released by ACLED. This update can be found here. These real-time data draw primarily on crowd-sourced information available from 2015Burundi as well as from ACLED’s weekly real-time conflict data release.
Burundi saw a sharp rise in conflict events during the week of October 26, with eight battles and 15 fatalities reported. Fourteen fatalities occurred on October 26 and 27 (Reuters, 28 October 2015). On October 26, unknown gunmen threw grenades at security forces in the capital of Bujumbura, sparking an exchange of fire with police and military forces. Several policemen and soldiers were wounded, one civilian was killed, and another body was found the following morning. Battles also occurred on October 26 in Kamenge, where one policeman was killed, and in Mwaro, where a battle of 50 gunmen resulted in four fatalities. Violence continued on October 27, with gunshots heard in the Cibitoke, Mutakura, and Ngarara neighbourhoods of Bujumbura. In Nyarusange, in the center of the country, seven gunmen were killed in clashes with security forces. At least one person was killed on October 31, when bus passengers returning from a funeral clashed with policemen searching for perpetrators of recent attacks.
In addition to the spike in battles and fatalities over the past week, reports surfaced of violence occurring the week of October 19 that were previously undocumented. The week of October 19 was initially reported as calm, marked by no conflict events or fatalities – the first uneventful week since political violence was triggered in April 2015 (ACLED Crisis Blog, 27 October 2015). However, reports have since surfaced of one battle and two incidents of violence against civilians, each occurring on October 24. In the Musaga area of Bujumbura, heavy gunshots and grenade explosions were heard as unknown gunmen targeted a police post. Also on October 24, a local administration official was shot dead in Kinama, and another civilian was killed in Cibitoke.
Attempting to quell the violence, as well as threats to the legitimacy of his third term, President Pierre Nkurunziza has issued a November 7 deadline for those carrying out attacks on security forces to disarm and receive amnesty and “civic training” (News24, 2 November 2015). 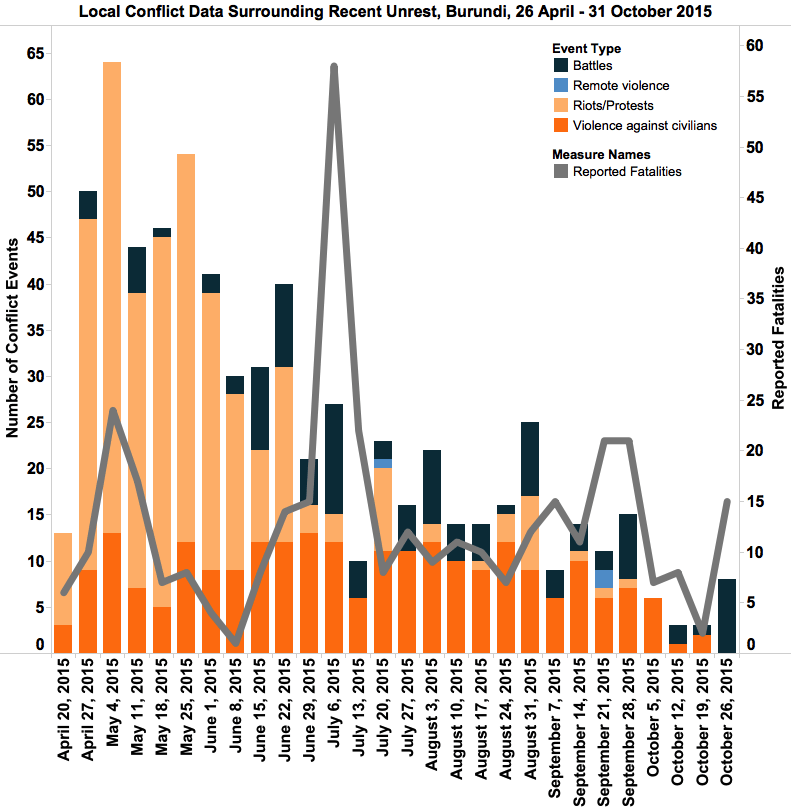