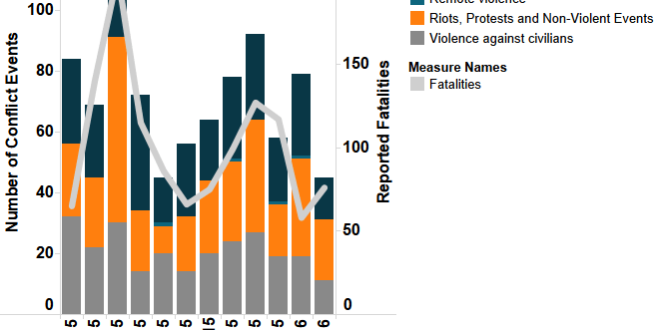 In the first quarter of 2016, many of the trends that marked the previous year continue to play out in the Democratic Republic of Congo (DR-Congo). The past year has witnessed volatility with respect to the number of riots, protests and politically violent events. This includes notable peaks in riots and protests in May and November 2015 (see Figure 1). Also prevalent throughout these months was violence between Bantus and Pygmies; violence against civilians attributed to the FDLR; ongoing military offensives by the Congolese armed forces (FARDC) against the ADF in May, as well as the FDLR and NDC-C in November. May also saw a significant number of protests during a 72-hour strike by MONUSCO staff, while November’s profile was more diverse, with roughly equivalent numbers of riots/protests, battles and violence against civilian events (see Figure 1). 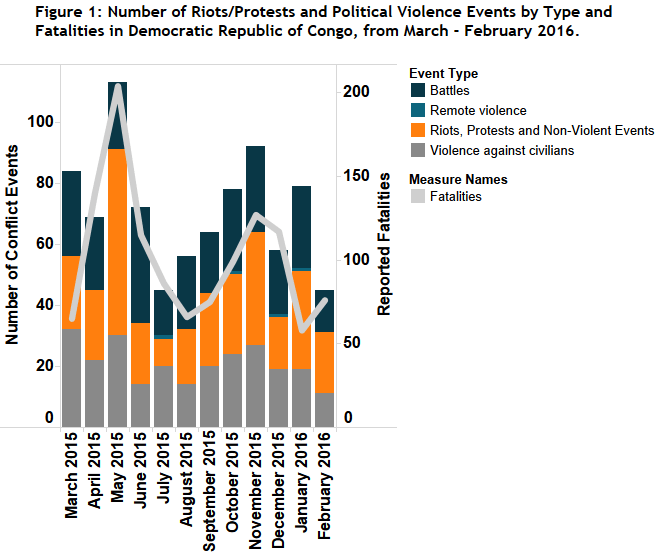 The ADF and FDLR continue to be active, particularly in clashes with FARDC and MONUSCO forces and civilian-targeted violence continues to recur, albeit at a diminished rate compared to 2015. Changes in the type of violence both groups are engaged in gives an impression of the effectiveness of the ongoing offensives against them by FARDC and MONSUCO. In the case of ADF, fewer cases of violence against civilians are being reported, especially when compared with the number of battles, suggesting that the pressure being put on them has been effective. However, the ADF’s recent killing of at least 16 civilians in mid-February in the Oicha area suggests that this observed dynamic is subject to change (Premium Times, 15 February 2016).

The FDLR has also come under increasing pressure from multiple conflict agents — not simply from FARDC — despite the considerable success of FARDC in taking back territory from the FDLR since the beginning of the year. In early January, the FDLR was accused of killing at last 14 Nande in the village of Miriki in the Lubero area. Since this incident, the spectre of ethnic conflict has been a running theme in the Eastern DR-Congo following what was considered a retaliatory attack by the Nduma Defence of Congo-Renewal (NDC-R). The NDC-R is seen as aligned with the Nande against the FDLR and the attack resulted in 21 Hutu killed during an attack on Mukeberwa, an FDLR stronghold (Reuters, 8 February 2016). Whether this will continue to escalate is yet to be seen.

Finally, protests related to President Joseph Kabila’s attempts to extend his mandate have also continued, and accounts of a mass grave found which may hold bodies of murdered protestors is casting a long shadow.  Significant protests related to the presidential elections have occurred in 2016. These have included demonstrations to mark the anniversary of violently dispersed protests on 19 January 2015. These protests occurred in Kinshasa, Lubumbashi, Bukavu and Goma, but were largely repressed, collectively resulting in at least 100 arrests by security forces (Al Jazeera, 28 January 2016). More recently, a national strike was called by the G7 coalition of opposition parties on 16 February, resulting in shut-downs of a number of urban centres, but most notably Kinshasa, Bukavu, Uvira and Goma (Human Rights Watch, 23 February 2016).