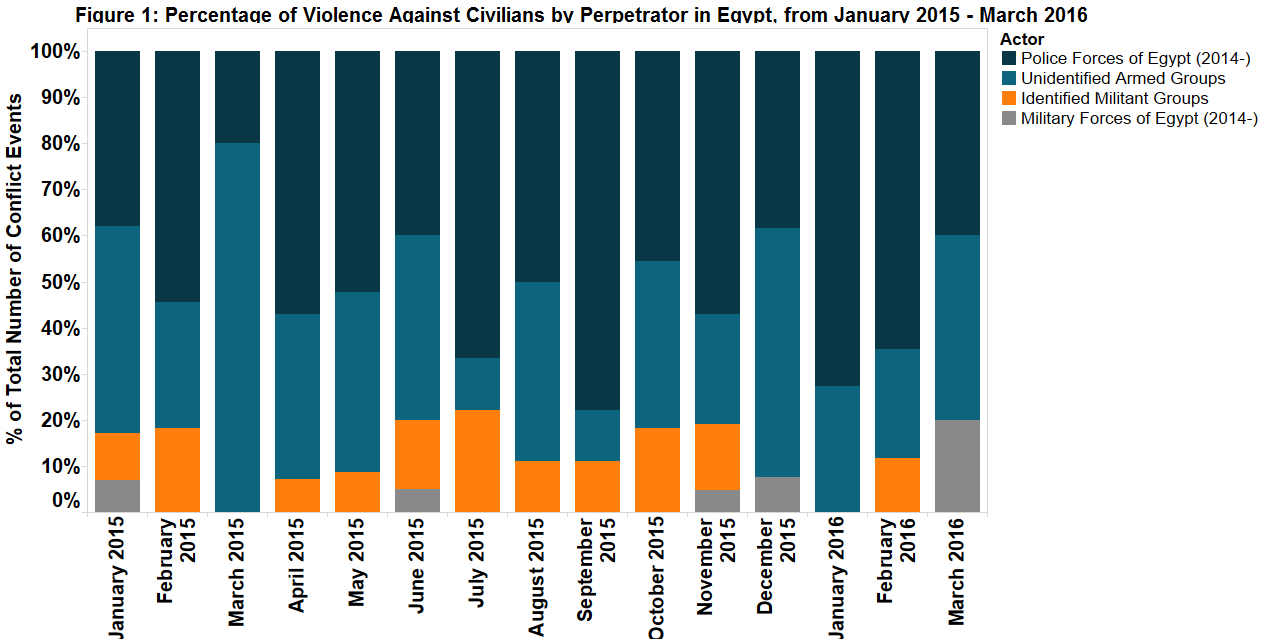 The number of reported abuses committed by Egyptian police forces dropped in March following a turbulent four months. Between November 2015 and February 2016, police forces perpetrated an average of 58% of all violence against civilians as old tensions between the Interior Ministry and ruling regime once again boiled to the surface (Africa Confidential, 18 December 2015). Police forces were the single largest threat to civilian safety in the same period, more so than unknown armed groups and political militias (see Figure 1). Police violence was predominantly recorded in the Lower Egypt region, particularly in Cairo, where opposition to the regime remains strong, albeit diffuse. 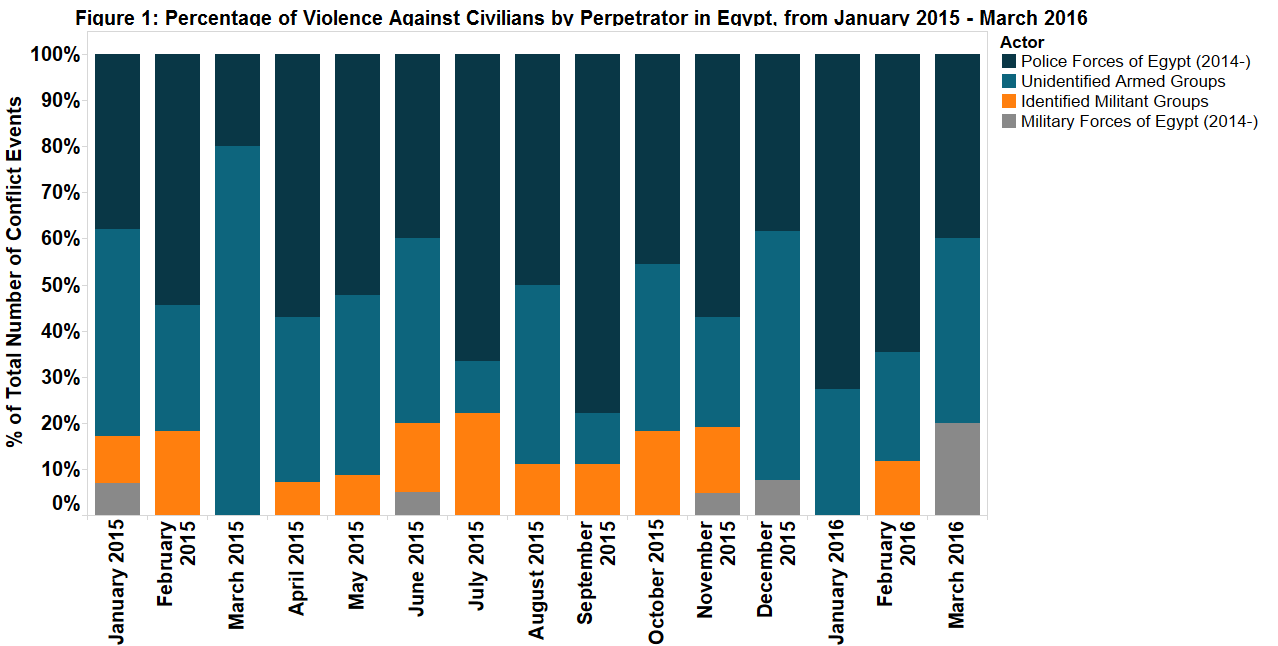 Public anger over such visible police excesses was renewed following the late November torture and killing of a man in Luxor in possession of Tramadol, a painkiller widely used as a recreational drug in Egypt. Two days of riots and protests in Luxor appear to have set the precedent for further unrest to challenge the hubris demonstrated by individual police officers. On the same day in 6 October City, west of Cairo, a traffic policeman was remanded in custody for four days pending investigations over allegations that he had violently beaten a microbus driver and threatened to fabricate a drug possession to incarcerate him. These incidents were followed in January by an assault on doctors by a policeman receiving medical care in Matariya district of Cairo. The embarrassment continued for the Interior Ministry on the 18 February when a plain clothed policemen shot and killed a taxi driver in a personal dispute in el-Darb el-Ahmar district in Cairo. The swift response of the Cairo Criminal Court in handing the officer in question a life sentence – who have previously acted with relative impunity – illustrates the reproach with which the regime views these actions as it attempts to quell dissent and distance itself from continued police abuses (Egypt Independent, 2 April 2016).

Al-Sisi’s regime is on rocky ground amidst the continual denial by the Interior Ministry of systemic extrajudicial arrests and enforced disappearances, severely strained relations between Egypt and Italy over the death of Italian PhD student Giulio Regeni, a mounting crackdown against human rights NGOs such as El Nadeem Center for Rehabilitation of Victims of Violence, and a stagnating economic recovery that forced Egypt to devalue the pound in March by 13 per cent against the U.S. dollar to stimulate investment (Bloomberg, 5 April 2016).

The death of Regeni has more recently been linked to the police beating of Khaled Said in 2010, a catalytic event for the 25 January 2011 uprising. Both the Editor-in-Chief Mohammed Abdel-Hadi Allam of the pro-government newspaper Al-Ahram and the mother of Khaled Said have made the connection between the two events, with the former warning of the incendiary potential of continued police impertinence (Daily News Egypt, 3 April 2016; New York Times, 3 April 2016; The Big Story, 3 April 2016). Given the pragmatism with which the ruling Egyptian military treats its interests, if the embarrassing situation continues unchanged, a reshuffle in the Egyptian top leadership could be on the horizon.