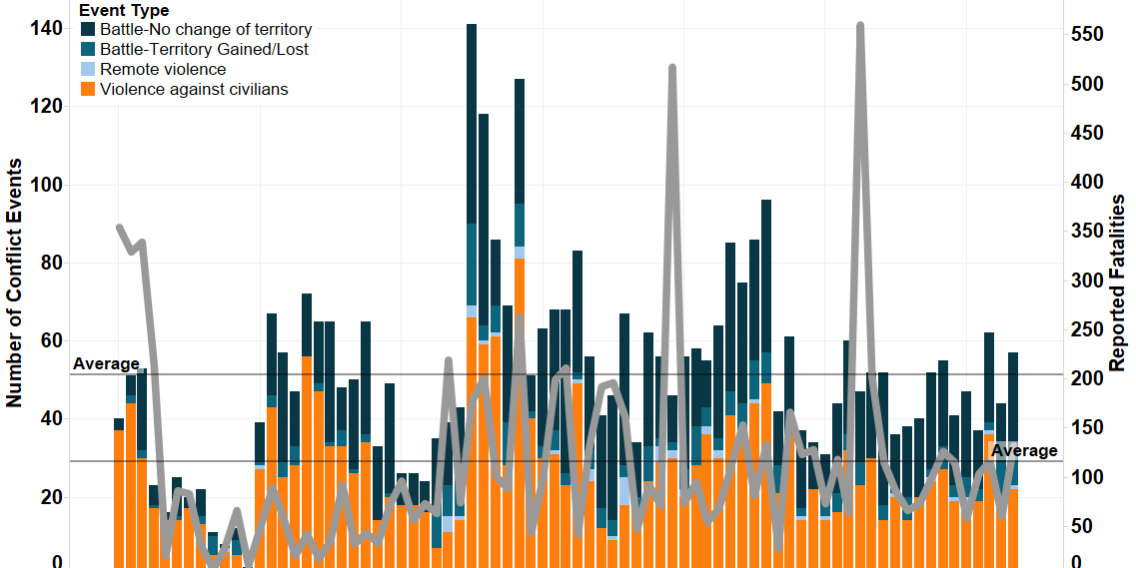 Over the past few months, the Democratic Republic of Congo (DR-Congo) has witnessed the consolidation of several trends going back as far as early 2015. These include offensives against armed groups in the East, frustration by civilians at the military’s inability to provide security to recaptured territories, and growing tensions related to the expectation that the upcoming elections will be delayed.

Insecurity in the Eastern DR-Congo has remained relatively stable with both the number of events and fatalities over the last 6 months comparable to the average over the past 5 years (see Figure 1). This is despite continued military offensives, such as renewed efforts by FARDC and MONUSCO to root out ADF bases in Beni territory (Radio Okapi, 23 May 2016). Although this cooperation has produced victories for the military forces, ADF rebels continue to show their ability to carry out high fatality attacks on civilians, with at least 30 killed in early May by the group (AFP, 11 May 2016). Similarly, offensives against the FDLR, APCLS and Raia Mutomboki militias have all produced modest gains, notably in terms of recovered territory, but have failed to produce decisive victories or lasting results. 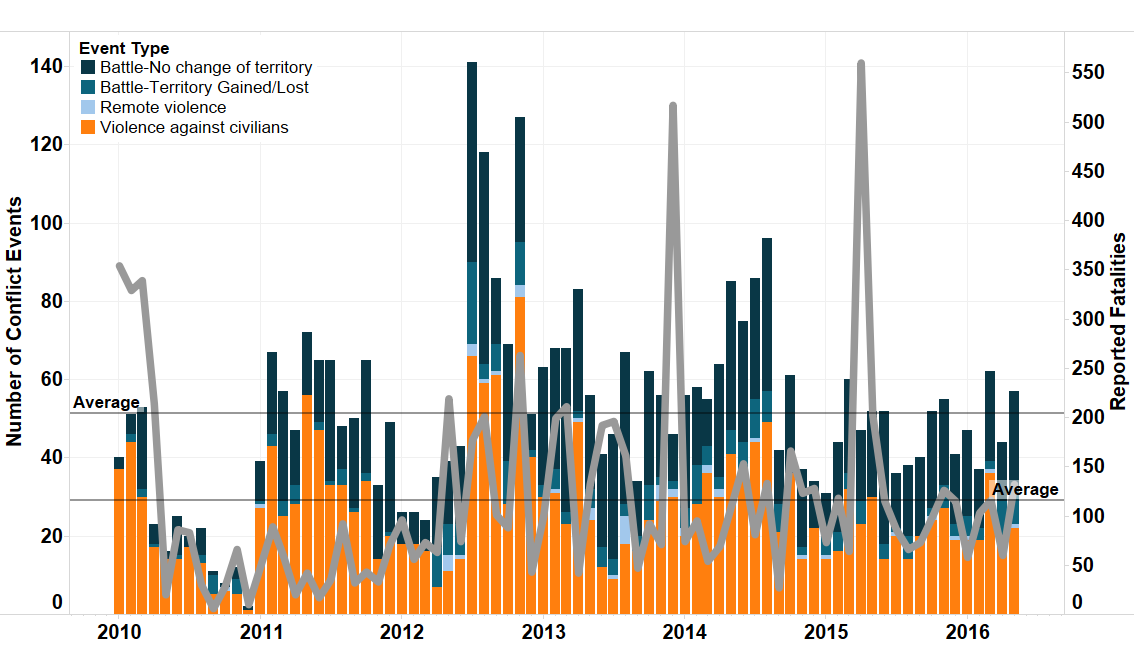 One particularly notable example of this is the Congolese military’s inability to hold recaptured areas. For example, an operation in the Bashali-Mokoto grouping in March succeeded in taking back territory from the Nyatura-FDLR coalition (Radio Okapi, 17 May 2016) but as FARDC soldiers withdrew to focus on other areas, this armed group simply reoccupied the areas as they were vacated (Radio Okapi, 31 May 2016). This trading of territory has characterised operations in the East, especially given non-state actors’ recognition of the military’s limitations (Oxfam, 6 March 2015). Clashes have contributed to the ongoing insecurity of the civilian population, with the return of militias leading to significant displacement as well. Because of this, frustration has continued to mount among residents of these areas, as portrayed by regular “dead city” protest strikes against insecurity, most recently on 5 May and 18 May (Radio Okapi, 18 May 2016).

The DR-Congo has also seen a number of large-scale protest events over the past few months related to uncertainty surrounding the elections which are constitutionally mandated to occur in November 2016. However, the Independent National Electoral Commission (CENI) has signaled that electoral delays are likely (AllAfrica, 14 March 2016) and the Constitutional Court ruled that President Kabila may continue his term in office during these delays (France24, 12 May 2016). Together, these have provided the motivation behind a number of large and almost universally banned protests which occurred on 26 May in a number of Congolese cities (Al Jazeera, 26 May 2016). Of these protests, casualties were reported in Bunia, Goma, Kananga and Kinshasa, including at least one fatality in Goma. More recently, a large rally in support of President Kabila was held by his People’s Party for Reconstruction and Democracy (PPRD) on his birthday, where a party notable suggested that a referendum should be held to extend the President’s rule. If this comes to pass, planned protest actions are likely to result with the potential for DR-Congo to experience election-related violence on a similar scale to that seen in similar referenda in Burkina Faso and Burundi.