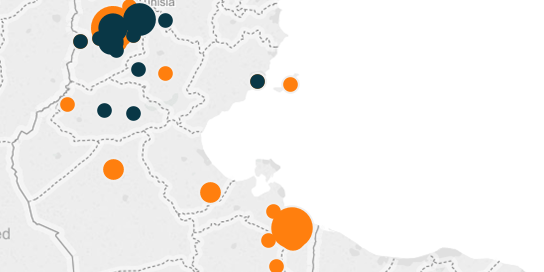 In 2016, Tunisia is experiencing increasing conflict activity in the southeast of the country. Figure 1 shows the distribution of political violence incidents across the Tunisian territory over the past twelve months, revealing how armed conflict has spread to the regions near the Libyan border. Whilst most conflict events are located around the western town of Kasserine, security concerns have extended to the province of Medenine and to its neighbouring regions since the March attack on Ben Gardane. 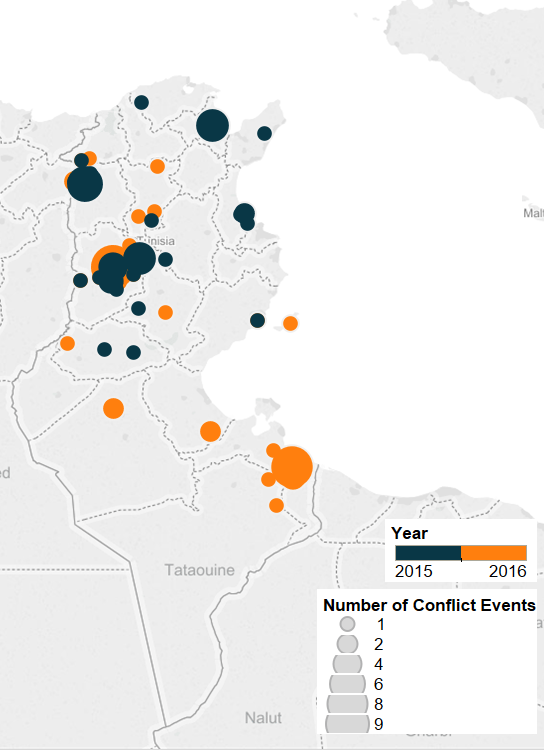 On March 7, the Islamic State (IS) launched a coordinated attack designed to overtake the town of Ben Gardane to establish an ‘emirate’ across the Tunisian-Libyan border. After shooting a local military officer outside his house at dawn, the IS command assaulted the local police stations and military barracks and engaged in a one-day battle with the security forces that left 53 people dead, including 35 militants, 11 soldiers and 7 civilians (International Business Time, 7 March 2016). The failed raid on Ben Gardane has not wiped out the threat posed by IS in Tunisia. On May 11, two alleged Islamist militants were killed and 16 people were arrested during a security operation in a suburb northeast of Tunis (Al Jazeera, 12 May 2016). The same day, four police officers died near Tataouine when a militant detonated an explosive belt while trying to escape arrest (Jeune Afrique, 11 May 2016).

These episodes carry wider implications for Tunisia’s security prospects. The Ben Gardane attack point to the IS’ improved military capabilities. While last year’s attacks on Bardo National Museum in Tunis and on tourist resorts in Sousse were carried out by “lone wolves” or small militant cells, in Ben Gardane IS militants aimed at overtaking the town attacking the military facilities while simultaneously inciting a popular insurrection (Crisis Group, 9 March 2016). Despite the eventual failure of the strategy, the episode marks a radical shift in the IS’ tactics in Tunisia.

In addition, the IS’ increasing presence on the Tunisian territory shows the growing concerns over the spill over of violence from Libya. Earlier this year, Tunisian authorities erected a 200-km barrier along the frontier with Libya in the attempt of securing the border and combat weapons smuggling. However, it is unclear how effective the barrier was in containing the spread of violence. Commentators have recently linked the attack on Ben Gardane with a previous US air strike in north-western Libya, after which several Tunisian Islamist fighters have slipped across the border and returned to their home country (International Business Time, 8 March 2016).

While Libya has become a training ground for hundreds of young Tunisians who have joined Islamist organisations since 2011, Islamist militants exploit illegal trade routes to cross the border and smuggle weapons into Tunisia (Reuters, 24 May 2016). Given how the local economy relies on cross-border trafficking, collaboration with the local population is crucial to secure the Tunisian-Libyan border and contrast IS recruitment in the region.