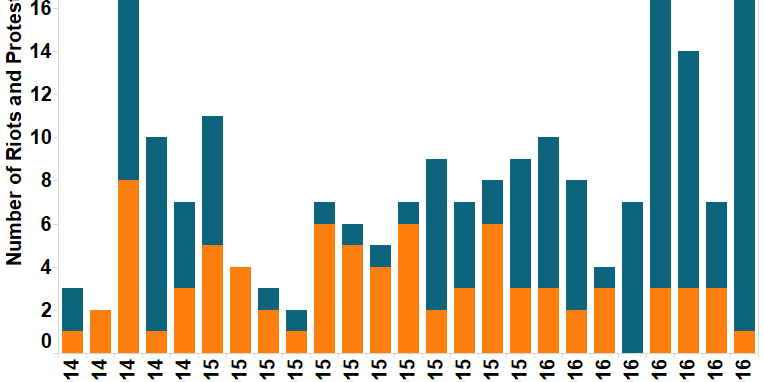 Zambia provides a typical case study for the growing protest movements appearing in sub-Saharan Africa in response to fragile economies and illiberal multiparty democracy (The Economist, 20 August 2016). With declining copper prices, unequal distribution of wealth (World Bank, 8 April 2016) and claims of a fraudulent election victory for Edgar Lungu, since May 2016 Zambia has been hit by the highest levels of riots and protests since October 2014 (see Figure 1). 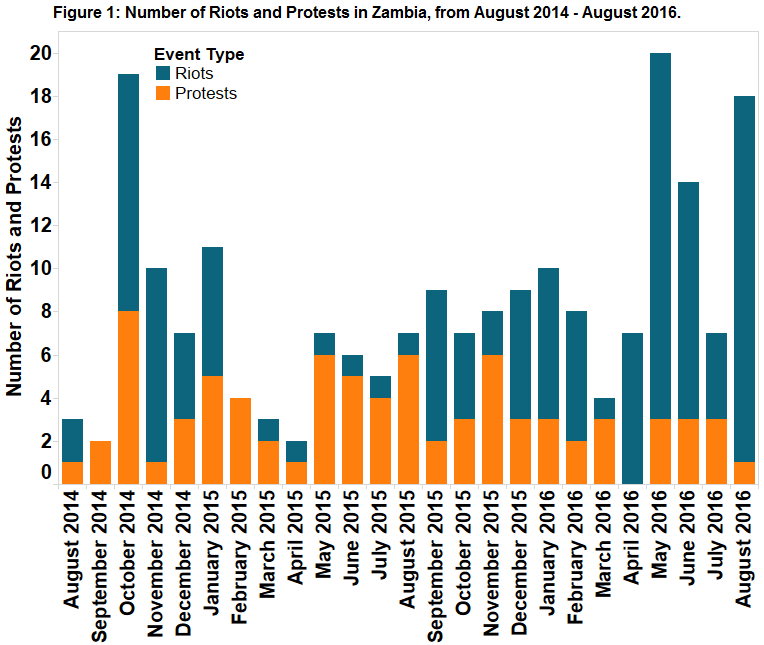 Whilst low-level diffusion of rioting has taken place, it is regionally clustered. Furthermore, police activity and the abandonment of non-violent strategies of resistance signal a changing approach that suggest that violence is providing a substitute for the inability to generate the widespread adoption of protest.

Whilst mid-August protests predominantly concentrated in Southern province, the recent unrest in Zambia signals a shift in the primary mode of resistance by aggrieved populations. Since August 2014, Zambians predominantly staged protests, which accounted for over 61% of popular contention. Since May 2016 however, riots constituted an average of 83% of collective action events, reaching a climax in August 2016 with nearly 95% of events being riots.

The reason for adoption of more violent techniques may be partly explained by the geographically-contained nature of protests across Zambia. Since May 2016, protests have largely been staged within Southern, Lusaka and Copperbelt provinces. Even within these provinces, the protesters have not always been unified solely against a national grievance or a common target such as the ruling Patriotic Front (PF). For example, Copperbelt has witnessed the expression of immediate grievances over specific economic demands such as student riots, protests by university lecturers over the allocation of parking spaces and cement worker protests. Therefore, the increased rate of riots may signal a growing frustration with the fragmented organisation of protests in light of the most recent elections.

Police repression has not displayed strong systematic activity, with police activity reported sporadically across Central, North-Western and Lusaka Province in roughly equal measure. Slightly higher levels of repression have been recorded in Copperbelt and the opposition stronghold of Southern province, but no obvious trends emerge that suggest the regime is under pressure.

Similar to Gabon, protests beginning the week of 14 August 2016 took place in provinces that already have networks and organisational capacity to mobilise protesters. Yet, Zambia diverges from Gabon when analysing the specific subnational level locations, where riots diffused to new areas in Southern province that in the past two years have not experienced political violence (see Figure 2). In the map, the red translucent circles indicate locations with protests since August 2014 and the blue circles represent the most recent protests. New locations include Choma, Batoka, Muzoka and Monze. 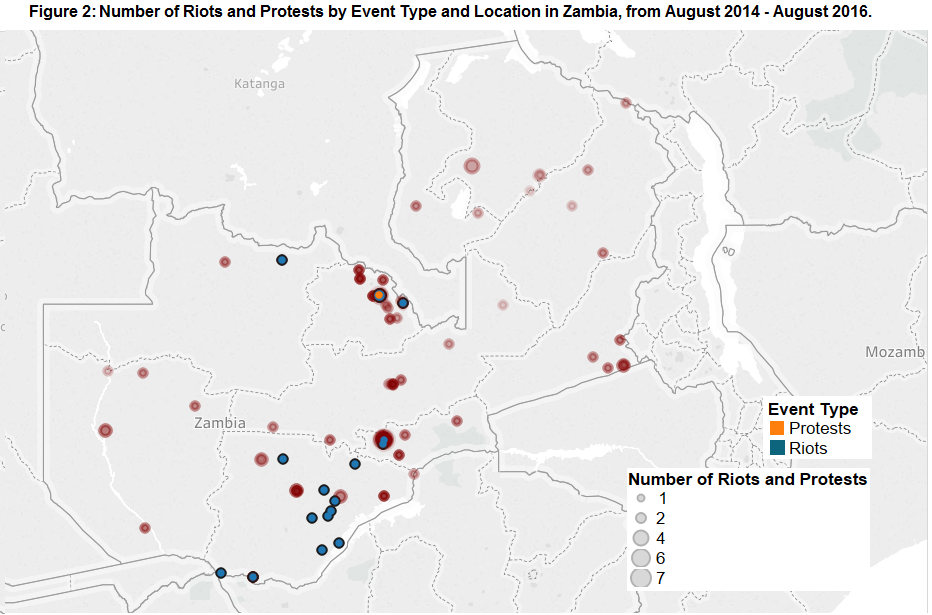 Whilst national media reports a series of isolated protests (Zambia Reports, 17 August 2016), these riots clearly indicate a localised success in generating new support and momentum for the opposition United Party for National Development (UPND) and an increased propensity for Zambians to take to the street to change the status quo. Nevertheless, the absence of recorded protest activity since 22 August and limited police crackdowns suggests that the diffusion of protests will struggle to reach beyond Southern province to pose a credible challenge to the Lungu regime.