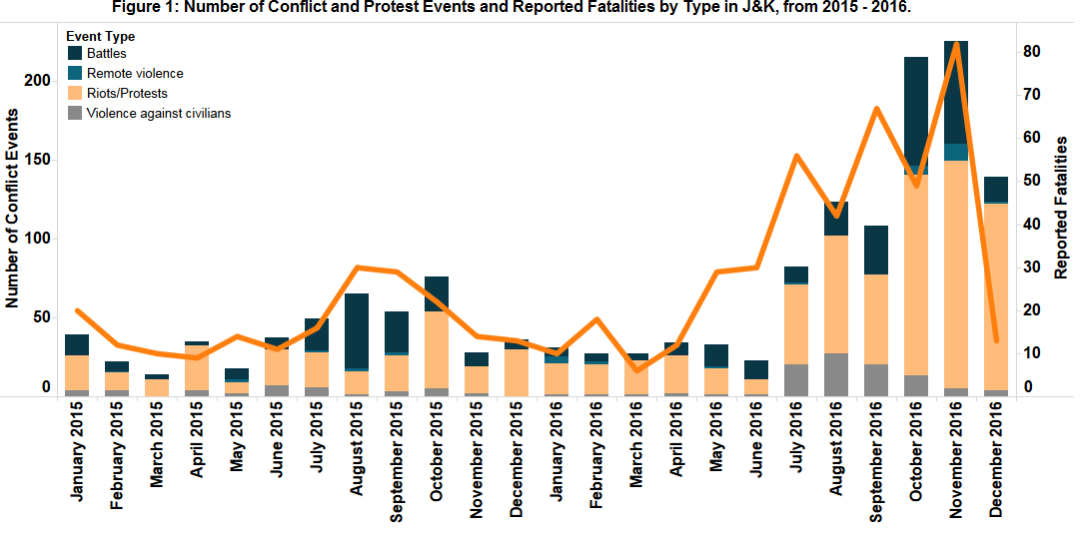 The end of 2015 signalled a high note in India-Pakistan relations with Indian Prime Minister Narendra Modi paying a historic visit on December 25 to his Pakistani counterpart, Prime Minister Nawaz Sharif (BBC News, 1 January 2016). This was the first visit by an Indian Prime Minister to Pakistan in over a decade. However, hopes for peace between the two rival countries have since been shattered by the precipitous deterioration in India-Pakistan relations during 2016. The most dramatic catalyst was a deadly attack in September by Jaish-e-Mohammad (JM) militants on an Indian army base in the Uri region of Indian-administered Jammu and Kashmir. The Indian army responded later that month with ‘surgical strikes’ in Pakistan-administered Azad Jammu and Kashmir. With the current tensions along the border and mutual distrust between the governments on either side, an analysis of ACLED data since 2015 can offer both insight and perspective on the current situation.

A main obstacle to peace between the two countries remains their dispute over the Jammu and Kashmir (J&K) region. Early 2016 was fairly stable with a relatively low number of events and fatalities. However, the region began to see an upward trend in fatalities and events starting in May and continuing throughout the Summer. This included a significant rise in incidents of riots and protests in July, including incidents of violence against protesters. This unrest was touched off by the July 8 killing by Indian security forces of a Hizbul Mujahideen (HM) militant, Burhan Wani, who was well-known in the region due to his social media presence. Riots and protests following Burhan Wani’s death, along with the police actions in response, became a major driver of violence in the region, with as many as 85 people killed and a large number injured (11,000 people injured according to the Times of India), during riots and protests in July and August 2016 alone (Times of India, 27 August 2016).

It was within this environment of instability and rising tensions that the Uri attack took place, shifting the main driver of violence in the region towards active military confrontations while also bolstering the existing upward trends in the event count and fatalities. On September 18 a number of heavily-armed Jaish-e-Mohammad (JeM) militants staged an assault on the Indian army brigade headquarters at Uri, near the Line of Control (LoC), which resulted in the deaths of at least 17 soldiers and 4 militants. This was reported to be the deadliest attack by militants in Kashmir in over two decades (BBC News, 18 September 2016), and touched off significant tensions both within the J&K region and internationally between India and Pakistan. Following the incident, the Indian government made it clear it held Pakistan responsible for the attack, with the Indian Home Minister Rajnath Singh accusing Pakistan of giving “direct support to terrorism and terrorist groups” in reference to the Uri incident (NDTV, 18 September 2016).

Following the Uri attack, on September 29 India claimed to have executed ‘surgical strikes’ against suspected militant targets within Pakistan-administered Azad J&K, raising concerns about a serious escalation between the two countries. The Indian government claimed the strikes were ground operations that involved 70-80 special forces members (Indian Express, 1 October 2016), while news sources carried unconfirmed reports that around 30 militants were killed (BBC News, 30 September 2016). However, the Pakistani government dismissed these claims, contending that Indian forces had instead crossed the LoC in several areas but had been driven back in most cases resulting in two Pakistani soldiers killed, and that no surgical strikes on militant bases had taken place (BBC News, 23 October 2016).

To gain some perspective on this recent bout of tensions, it is useful to look at the data from 2015 for comparison. In 2015, August was the most eventful month in J&K with 83 events recorded by ACLED, while October was the deadliest month with 30 reported fatalities. By comparison, November 2016 more than doubled both numbers with ACLED recording over 220 events and more than 80 fatalities (see Figure 1). This represents a relatively steep rise in the level of violence in the J&K region, representing serious destabilization which historically has strongly correlated with declining India-Pakistan relations (The National, 20 September 2016). 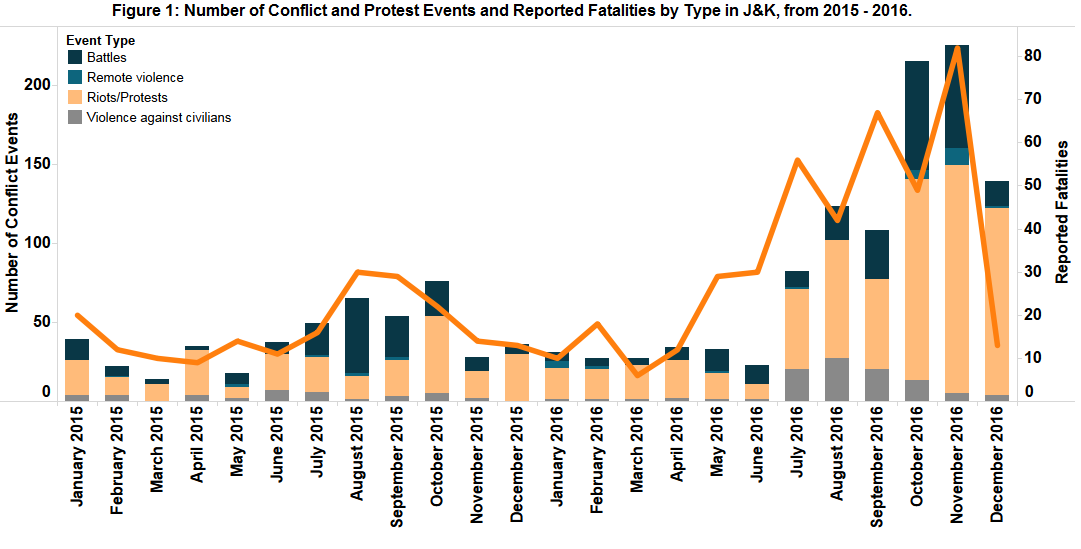 Deeper analysis of violence along the LoC also shows that a large proportion of the fatalities from battles shown in Figure 2 are the result of either direct military confrontations between Indian and Pakistani forces or what Indian media refer to as ‘infiltration attempts’ across the LoC by allegedly Pakistan-supported militants. Furthermore, contrasts between the two years can be found in the trends around violence focusing on the LoC. For example, October and November 2016 alone saw as much violence across the LoC as 2015 as a whole. In 2015, August represents a peak which then saw rapid de-escalation until October. This can be contrasted with the sudden and sustained level of violence in 2016 following the ‘surgical strikes’ in October and November (see Figure 2). 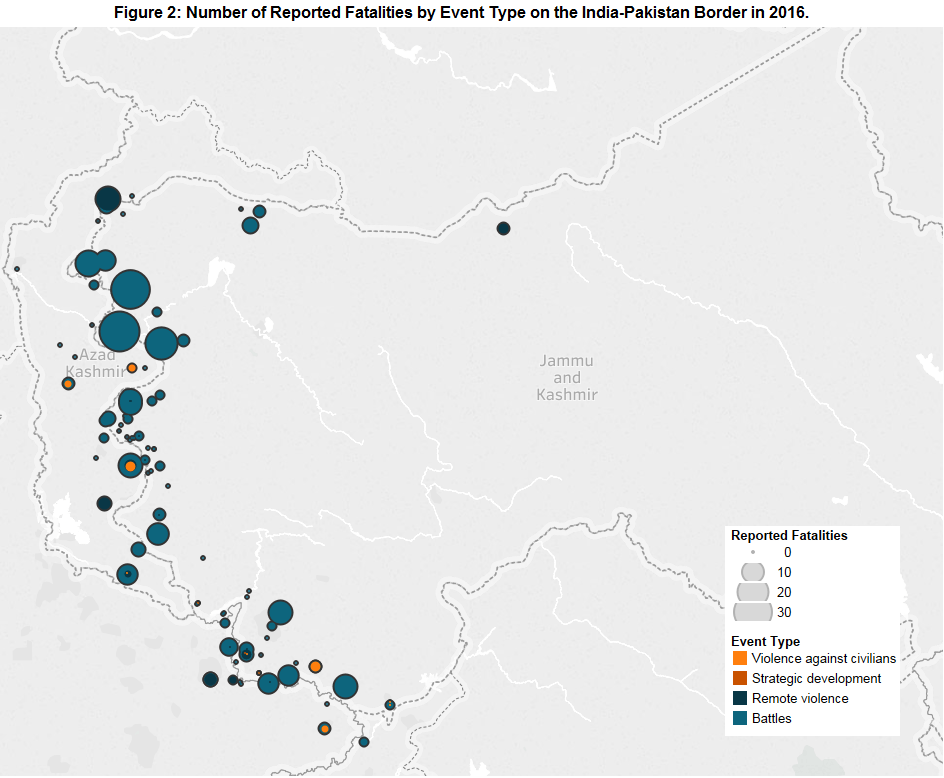 However, looking to the data ACLED has recorded for December, this violence also appears to have dropped just as suddenly as far fewer incidents of cross-LoC violence have been reported for the month of December. Another relatively high-fatality attack on November 29 which targeted Indian soldiers at Nagrota in Indian-administered J&K and resulted in the deaths of at least 7 soldiers and 3 attackers (Indian Express, 30 November 2016). Although it is not immediately clear why violence along the LoC fell off in December as compared to its initial rapid rise, although international pressure to de-escalate the situation is believed to have played an important role (The Nation, 14 December 2016), including UN efforts requested by Pakistan (Indian Express, 7 December 2016). This shows the danger presented when volatile regions such as J&K see significant destabilization. In this case, the unrest following Burhan Wani’s killing created the perfect tinderbox which was then set alight by the Uri attack and maintained the continuous addition of fuel in the form of attacks across the LoC carried out by both sides.

The current tensions in J&K and the continuous ceasefire violations across the LoC are matched by an increasing mobilization of the civil society of India and Pakistan, particularly during the summer months of 2016 (see Figures 3 and 4). With the escalation of the situation in J&K in July, ACLED recorded just over 30 anti-India demonstrations all across Pakistan in 2016 by civil society groups and political parties protesting the approach India took in suppressing civil unrest in India-administered J&K (see Figure 3). Protests in October and November also focused on India’s actions along the LoC as well as India’s support for separatist movements in Balochistan. An important note that as this analysis is focused on India-Pakistan relations, only anti-India protests in Pakistan have been included in Figures 3 and 4 while anti-India protests in Indian-administered J&K have not been included so as not to skew the data.

In India, ACLED recorded more than 90 anti-Pakistan protests which significantly spiked in the aftermath of the Uri attack (see Figure 3). The Uri attack and Pakistan’s perceived involvement led to an outcry by all major parties across the political spectrum as well as several by Muslim organisations, condemning the Uri attack but also demanding decisive government action against alleged Pakistan-sponsored terrorism. Calls for an ‘appropriate response’ to the Uri attack also came from opposition parties and from within Modi’s Bharatiya Janata Party (BJP), putting further pressure on the government to take a hard stance against Pakistan (Firepost, 19 September 2016). While the Indian media widely endorsed the so-called ‘surgical strikes’, these actions did not reduce the mounting anti-Pakistan sentiments in India, which found an outlet in October through the burning of effigies representing Pakistan and Pakistani political figures in many parts of India during the Dussehra celebrations, the mythological victory of good over evil in the Hindu religion (DNA, 11 October 2016). Related to the events in J&K, anti-China protests also flared up across India prior to the Diwali festivities in October, the most important holiday in Hindu religion (see Figure 3). 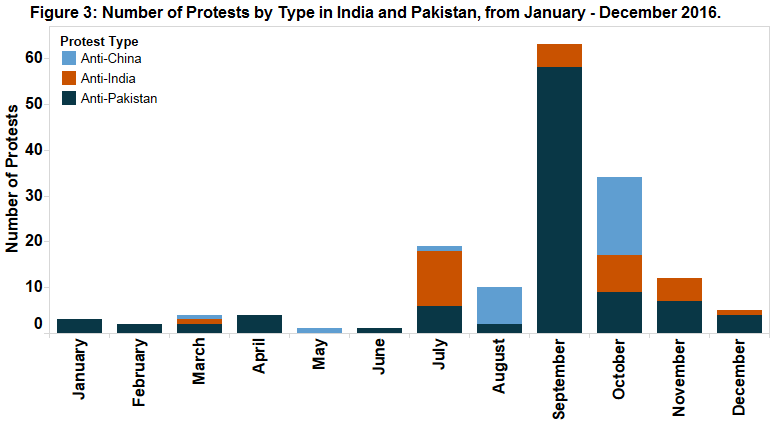 The highly visible demonstrations of anti-India, anti-Pakistan and anti-China sentiments and nationalist feelings by Indian and Pakistani civil society groups arguably put considerable pressure on the respective governments to take a hard stance. This can be seen as an important factor in the considerable increase in tensions in late 2016 which have complicated the prospects for peace and regional security. Despite the de-escalation that appears to have occurred in December, the underlying anger represented by these protests may be reignited by a future attacks by military forces or militants. 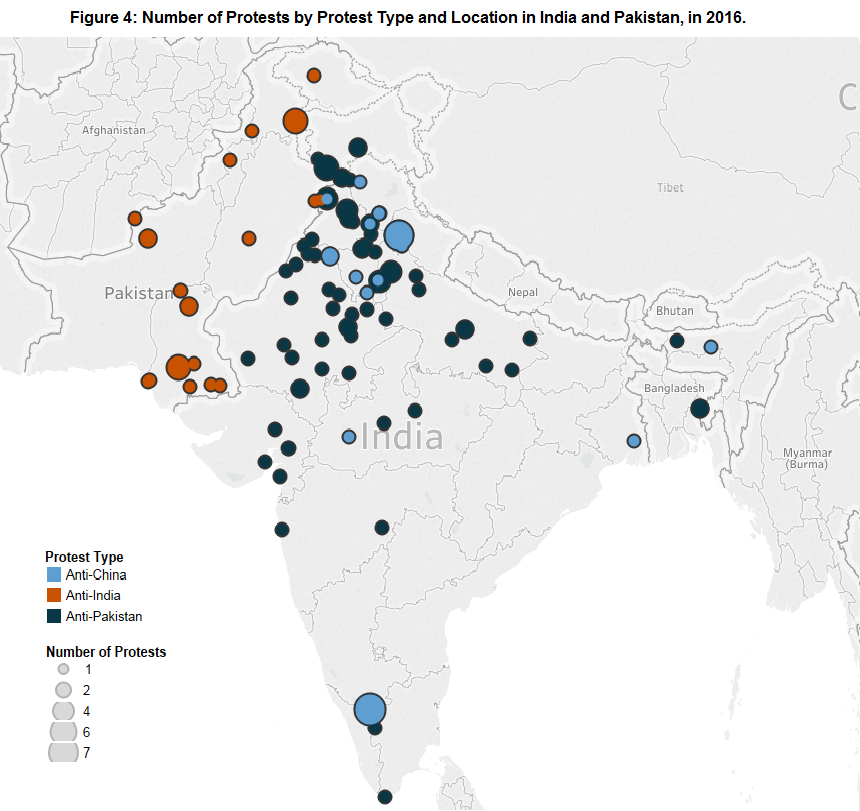 The second half of 2016 also witnessed a collapse in diplomatic relations between India and Pakistan. Both prime ministers used the occasion of their respective Independence Day celebrations in August to publicly stoke tensions between the two countries. In Pakistan, Nawaz Sharif dedicated the day to the “freedom of Kashmir”, while India’s Narendra Modi again denounced alleged Pakistan-sponsored terrorism in India (The Diplomat, 17 August 2016).

The Uri attack in particular marked a rise in diplomatic tensions between India and Pakistan. During a meeting of the United Nations General Assembly, Nawaz Sharif personally spoke out against alleged human rights abuses by Indian forces in Kashmir, a move that was reciprocated when the Indian envoy denounced Pakistan as the host of the “Ivy League of terrorism” (Hindustan Times, 22 September 2016).

In the aftermath of September’s violence in J&K, Modi fought a political war against Islamabad by publicly backing separatist rebels in the insurgency-prone Pakistani province of Balochistan, questioning a key cross-border river treaty and actively working toward diplomatically isolating Pakistan within the region (The Guardian, 28  September 2016). This strategy proved to be successful when the 19th South Asian Association for Regional Cooperation (SAARC), which was scheduled to be held in Islamabad, Pakistan on 15 – 16 November 2016, had to be called off after India, Bangladesh, Bhutan and Afghanistan pulled out of the conference stating that the environment was “not conducive” to holding the summit (BBC News, 28 September 2016). Pakistan’s isolation was further illustrated in the course of the Sixth Ministerial Conference of the Heart of Asia in Amritsar, India on the first December weekend which was attended by 14 partner countries and more than 30 supporting countries and international organisations. The conference was characterized by an Indo-Afghan partnership which heavily focused on terrorism and Pakistan’s alleged role as a safe haven for terrorist activities in the region (Indian Express, 4 December 2016).

By the end of October, the diplomatic spat between India and Pakistan had further escalated with a tit-for-tat naming of diplomatic staff over accusations of espionage by both sides and plans to temporarily recall their high commissioners and scale down the size of each ones’ diplomatic missions (Firepost, 4 November 2016). Despite the decline in active military confrontations across the LoC, the diplomatic proxy war between the two governments shows little sign of abating (IBT, 30 December 2016). This is particularly true in the context of recent Indian nuclear tests which, although broadly seen as conducted with deterring China in mind, will likely further exacerbate  India-Pakistan tensions (CNN, 27 December 2016).

The fluctuations in India-Pakistan relations over the past year demonstrates how an event in an isolated sector of the Kashmir Valley can have significant geopolitical ramifications which affect the entire region. The military, political, and diplomatic fallout of the Uri attack rippled out in waves, eventually affecting high-level conferences and pushing both India and Pakistan’s partners and the international community to get involved over fears of escalation between the two nuclear-armed rivals. Before this, the death of Burhan Wani laid the groundwork for this destabilization of the entire region by first increasing the volatility in J&K. This suggests that generalized destabilization of the J&K region can be seen as a key early-warning indicator for rising tensions between India and Pakistan, and thus should be watched for keenly by those concerned about the stability of the South Asian region.

This report was originally featured in the February ACLED Asia Conflict Trends Report.