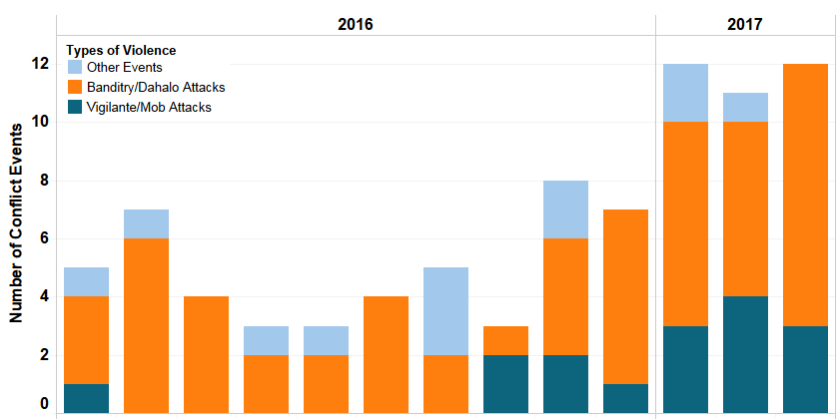 The number of conflict events in Madagascar has risen sharply since the start of 2017. While conflict levels are generally low compared to other African nations of similar geographic and population sizes, the overall increase in violent events should be viewed with concern. The increase in violence highlights not only growing insecurity, especially in rural areas, but also illustrates the state’s inability to deal with and control disorder. Two factors have contributed to this increase in violence in Madagascar: the increase in violent raids and attacks perpetrated by ‘bandits’, often referred to as the Dahalo (Malagasy for bandits), and the related increase in local community mob justice against suspected criminals.

Banditry attacks are most often perpetrated through the attack on rural villages and cattle rustling, and have long been a common feature in rural Madagascan society (IRIN News 18 July 2012). However, the frequency of bandit attacks has increased in recent months, and concentrated in remote rural areas far from the reach of the state apparatus (Allegra Laboratory, 21 November 2016). Figure 1 displays activity from January 2016 and outlines the increase in bandit/Dahalo attacks. While the government as establishing  special task forces and implementing a number of counter-measures to diminish such attacks, little difference has been made in curbing the threat of banditry. Insufficient resources, remote and underdeveloped rural terrain, as well as allegations that government officials are working with bandits hinder its ability to the reduce the frequency of attacks (Madagascar Tribune, 18 June 2016; Allegra Laboratory, 21 November 2016). 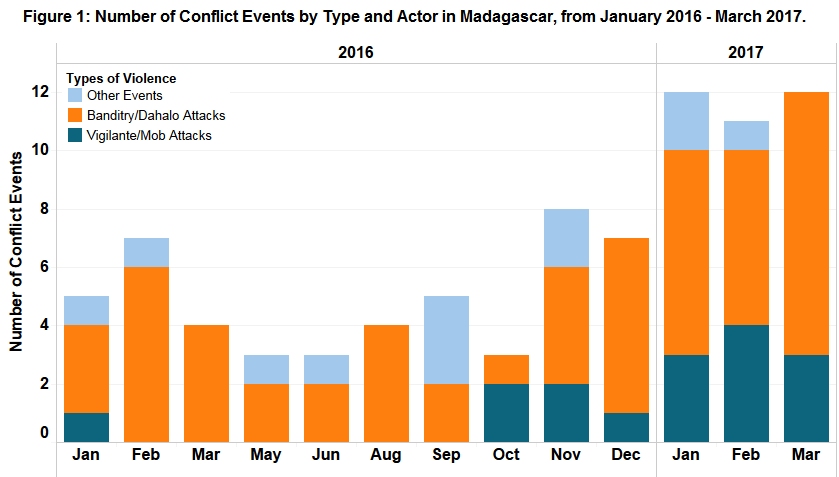 Linked to the government’s inability to ensure security is the increase of vigilante and mob attacks. The vindicate populaire or popular anger and subsequent attacks vis-à-vis suspected criminals largely stems from the Madagascans lack of trust in the police, armed forces and judicial systems. According to the FFKM (Malagasy Council of Churches), lack of confidence in the criminal justice system as well as perceived levels of corruption has been a major cause of increased in vigilante violence (Madagascar Tribune, 27 March 2017). Data gathered by Afrobarometer in 2014 supports this argument as more than half of the sampled population have “little” to “no” trust in the police (63%), military forces (56%) and the Courts of Law (71%) in Madagascar. Levels of mistrust are higher than previous data collection periods, suggesting that popular confidence in the judicial and security systems are declining. The lack of confidence in state institutions would appear to entice local communities to become the unofficial distributors of justice, taking the law into their own hands, hence the rise of vigilante attacks against suspected criminals.