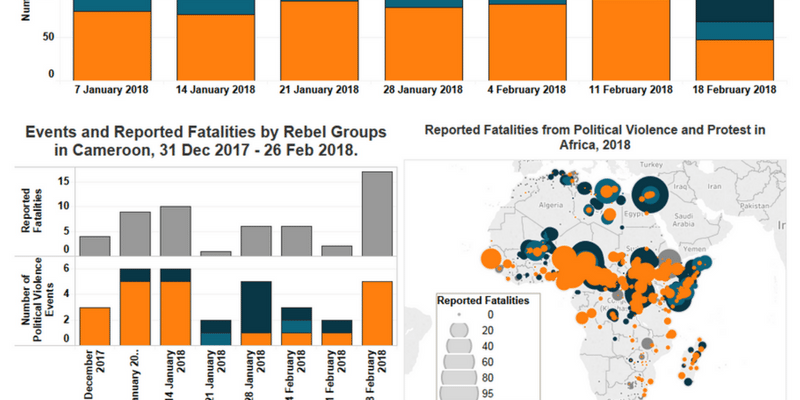 A drop in political violence and protest was recorded in the normally active countries of Africa last week, including Nigeria, Somalia and the Democratic Republic of Congo. Proportionally, battles between armed groups increased compared to the week beginning 11 February. Violence against civilians experienced a modest decrease.

Ethiopia maintained a steady rate of protests and civilian-targeted violence in the Oromia, Amhara and Southern regions albeit at a reduced rate from last week. Security forces engaged protesters violently on several occasions but with fewer reported fatalities. Violence against civilians has been increasing in Burundi since 4 February. Most of the reported violence has recently focused on forcing citizens to register to vote in the constitutional referendum in May 2018. This referendum is poised to allow Pierre Nkurunziza to be re-elected, extending his potential term limit to 2034. The violence is primarily carried out by the ruling party youth militia, CNDD-FDD Imbonerakure, though some instances involve the police as well.

This pattern of state harassment was similarly echoed in Egypt last week as the Supreme State Security Prosecution raided the headquarters of the Misr al-Qawia party, in addition to properties owned by the head of the party Abdel Moneim Abu al-Futuh and deputy head of the party Mohammed al-Qasas. This complete crackdown has led to al-Futuh being designated as a “terrorist”. Several candidates were arrested recently and barred from competing in the upcoming elections.

Of particular concern is the increase in organised violence in Mali over the past two weeks. The Group for Support of Islam and Muslims (JNIM) have ramped up their targeting of civilians and security forces, in the Mopti and Kidal regions respectively. A major military campaign involving French forces in cooperation with local militias GATIA and MSA targeted the Islamic State in the Greater Sahara. Significant losses were inflicted in the ranks of both militant groups during the past two weeks.

In Cameroon, Boko Haram activity significantly escalated this week following a lull in activity over the last 4 weeks. Specifically, violence against civilians increased five-fold compared to the past three weeks in the Far North Region. This in part may be due to the Nigerian government’s’ success in pushing the group out of the Sambisa Forest Reserve in Borno State, forcing them to relocate and pushing their attacks over the border. The ability of the Cameroonian military to tackle this security threat is set to be impeded by the on-going secessionist unrest in the Anglophone North West and South West regions, where the governor has extended a curfew.

Interethnic violence continued in Democratic Republic of Congo (DR-Congo) last week. The conflict in Djugu has resulted in more than 60 fatalities and over 1000 houses being burned down. In Mutanda, Nyatura Hutu killed one man, leading to uprisings from the Hunde and Nande groups. The latter attacked the Hutus, accused of colluding with the Nyatura, leading to the Hutu community being displaced and fleeing to Nyanzale. The ADF continued to engage in battles with the FARDC and were suspected of being active in other attacks. Amidst this melee of armed groups in the DR-Congo, the FRPI became active again with 5 men carrying an attack in Walendu Bindi which claimed the life of a civilian and a FARDC soldier. 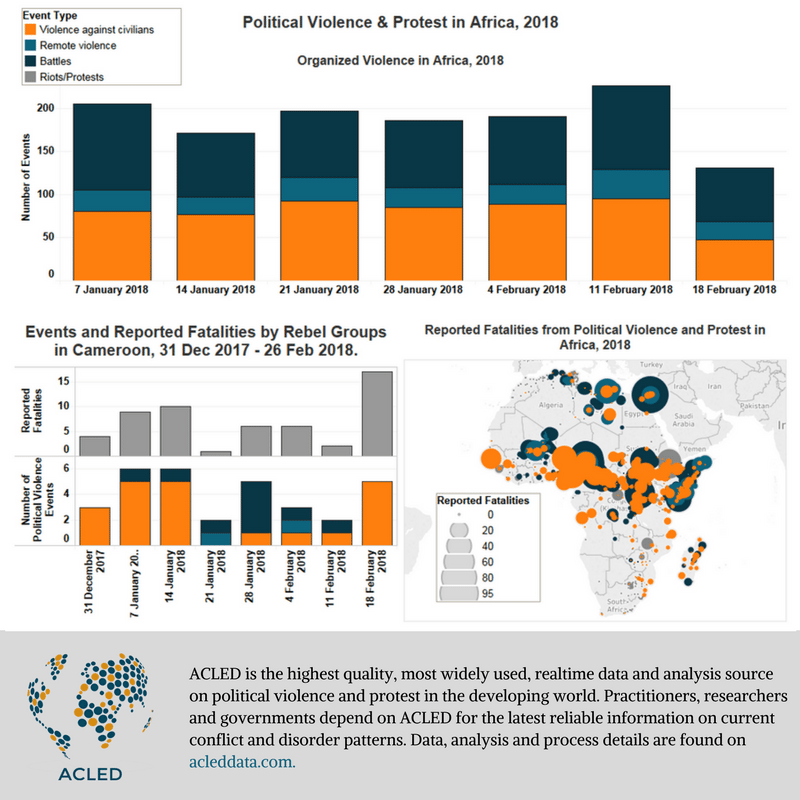