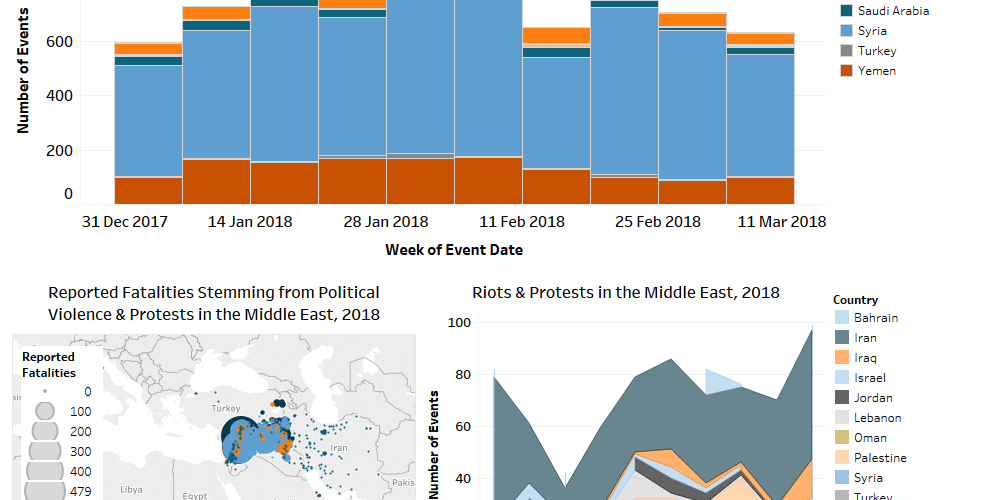 A number of novel protest dynamics were reported in countries across the Middle East last week, while offensives in Syria and Yemen continue to result in advances for government and regional forces in different areas.

In Iran, security forces clashed with farmers from the eastern villages of Isfahan province protesting the government’s perceived failure to deal with an ongoing drought. Protests by farmers are also ongoing in Jordan, where a meeting between the government and farmers upset by a tax hike did not produce a resolution. In Iraq, a spike in protest events was recorded related to the delivery of government services

and the arrest of a prominent Shiite cleric, Ayatollah Sayyid al-Shirazi, while in Turkey a number of protests by women’s groups in Istanbul and Ankara provinces took place; during these latter demonstrations, protesters demanded an end to inequality and injustice. Protests by Haredi Jews in Israel over conscription also suggest that tensions between these groups and the state may be rising again.

While new protest dynamics were reported elsewhere, ongoing trends in political violence continued in Syria and Yemen. In Syria, government forces continued to advance in Eastern Ghouta, splintering the rebel enclave into three distinct pockets of resistance. Turkish forces and their allies also advanced deeper into the Afrin region, reportedly to the outskirts of Afrin city. In Yemen, pro-Hadi government forces secured significant victories in the Sana’a and Al Bayda governorates. In an unusual move, Saudi forces have meanwhile been deployed north of Hajjah and are expected to take on a larger role in the fight for the border district of Harad. This may represent a shift in tactics following the sacking of Saudi Arabia’s top military chief and several other officials at the end of February.