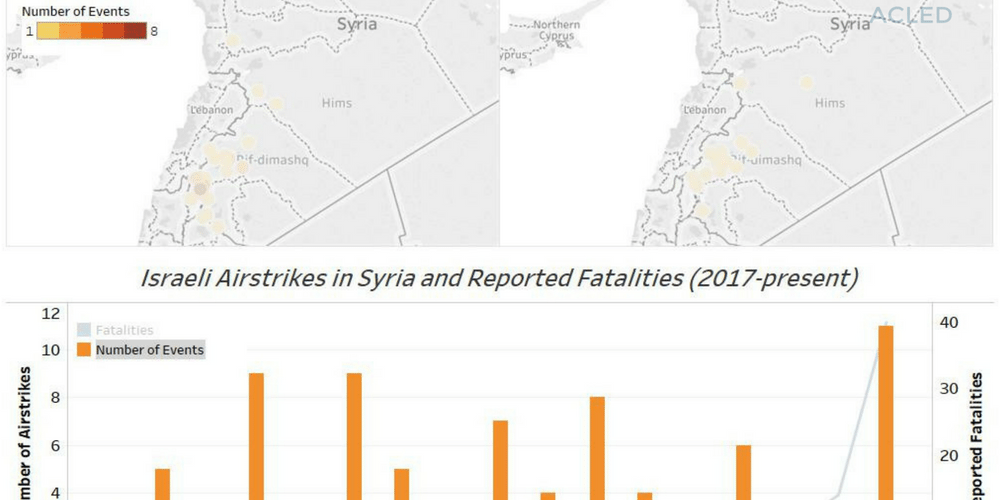 On May 10, 2018, Iran fired a barrage of missiles at the Golan Heights (10 May 2018, NYTimes). This occurred shortly after US President Trump pulled out of the Iranian nuclear agreement. Israel responded by attacking Iranian military sites in Syria at unprecedented scale, marking an escalation in Israel’s engagement in Syria and its conflict with Iran.
ACLED data show a steady level of Israeli military action in Syria across 2017 and a sharp increase in May 2018. This increase followed an incident in February 2018 in which Israel shot down an Iranian drone flying over Israeli airspace. This Iranian action validated mounting fears in Israel that the increased military involvement of Hezbollah and Iran in Syria to defend the Assad regime was emboldening these actors to directly threaten Israel.
The causes for the recent engagement are multifaceted. Israel and Syria have been in an official state of war since the establishment of the State of Israel in 1948, while Israel and Iran have been at loggerheads since the Islamic Revolution in 1979. In the 1980’s Iran and Syria formed a strategic alliance against Israel and backed proxy forces in the region, including Hezbollah and Hamas.
The growing role of Iran and the deterioration of diplomatic relations between Iran and the US are pushing Israel and Iran into direct confrontations in Syria. As our data show (see figures below) Israel has conducted more airstrikes that resulted in more reported fatalities so far in May 2018 than in any other month since the beginning of 2017. While Israeli airstrikes in 2017 concentrated in the area around the Golan Heights, airstrikes in 2018 hit central Syria and have gone further inland than previous strikes. The majority of Israeli airstrikes have targeted locations in Syria closer to the Israeli border in Quneitra, Dar’a, and Rural Damascus provinces. Israeli jets also have targeted locations inside the country such as the T4 airbase in eastern Homs and targets in Hama and Idleb provinces; in doing so, they defy Syrian and Russian air defenses.
ACLED data show that direct Israeli targeting of Hezbollah and Iranian forces in Syria have been in the minority, with the majority of its action targeting Syrian military or paramilitary forces. This suggests that Israel is employing a strategy of holding the Assad regime responsible for the actions of its allies by targeting Syrian military locations instead of engaging in direct confrontations with Iran and Hezbollah. As the Assad regime continues to regain territory in Syria, the presence of Hezbollah and Iran is likely to grow further. Consequently, these groups will continue to test their limitations vis-à-vis Israel.  For Iran and Hezbollah, participation in the Syrian conflict functions as both support for its old ally, the Assad regime, and an increased deterrent against Israeli and US actions. The recent show of force by both Israel and Iran indicates both parties’ abilities to target each other’s bases. However, it remains unclear if the latest escalation merely tested the waters, or if further armed conflict between Iran and Israel is imminent. The crucial factor will be Hezbollah’s involvement; Israel and Hezbollah have yet to directly clash, but the combination of Syria, Hezbollah and Iran could spell trouble for Israel at its northern border.